GAMEDAY 70: All The Stars 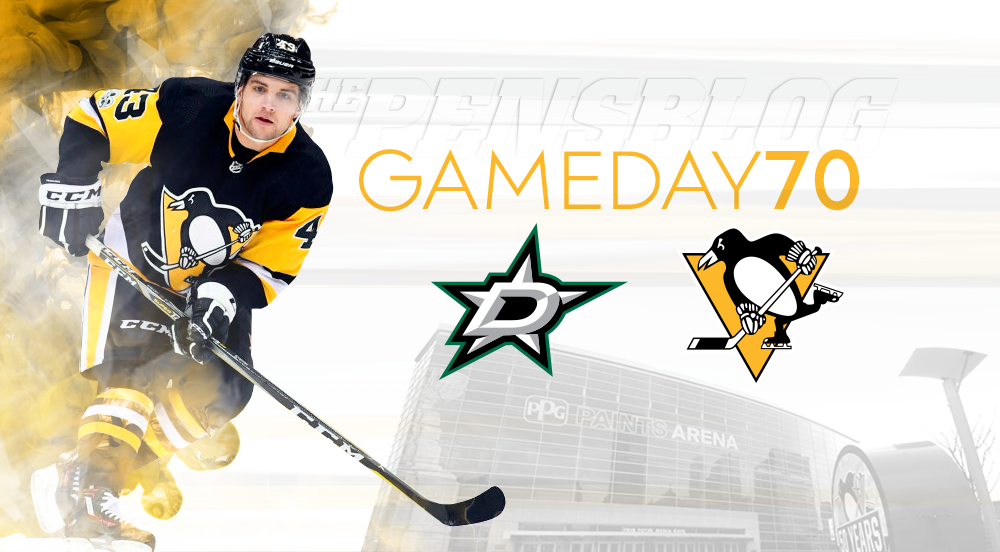 GAMEDAY 70: All The Stars

Just 24 hours after the Penguins fell 5-2* to the Leaves in Toronto last night in their 69th (nice) game of the season, the team that this blog writes about plays host to the playoff hopeful Dallas Stars in a rare Sunday night, nationally televised matchup.

Luv u bby.  Not going to get into the horseshit goaltender interference call last night.  You know what happened and the impact it eventually had.  Gotta put it behind you and get the two points tonight.

Both of these two teams come into this matchup sitting on 82 points and trending similarly over the last month plus of the season, racking up 23 points (Pens) and 22 points (Stars) since February started.  Both will also be without their starting goaltenders, as they have been for the last few games.

However, they exist in two distinctly different realms in their respective playoff races, making this second and final matchup of the year between the two (and last Western Conference team the Pens face this season) all that more important for both of them.

With the Caps winning last night, they sit a point clear of the Pens atop the Metro with a game in hand.

A similar logjam exists for the Stars, 3 points back from the #3 spot in the Central while currently occupying the top Wild Card slot and a potential first round matchup with the Golden Knights of Las Vegas.

Can’t imagine too much changing from the Leaves game, so it’s safe to assume the lines will stick and DeSmith, who came in in relief of Jarry in the 3rd to make 9 saves, gets the nod.

WHAT TO WATCH FOR