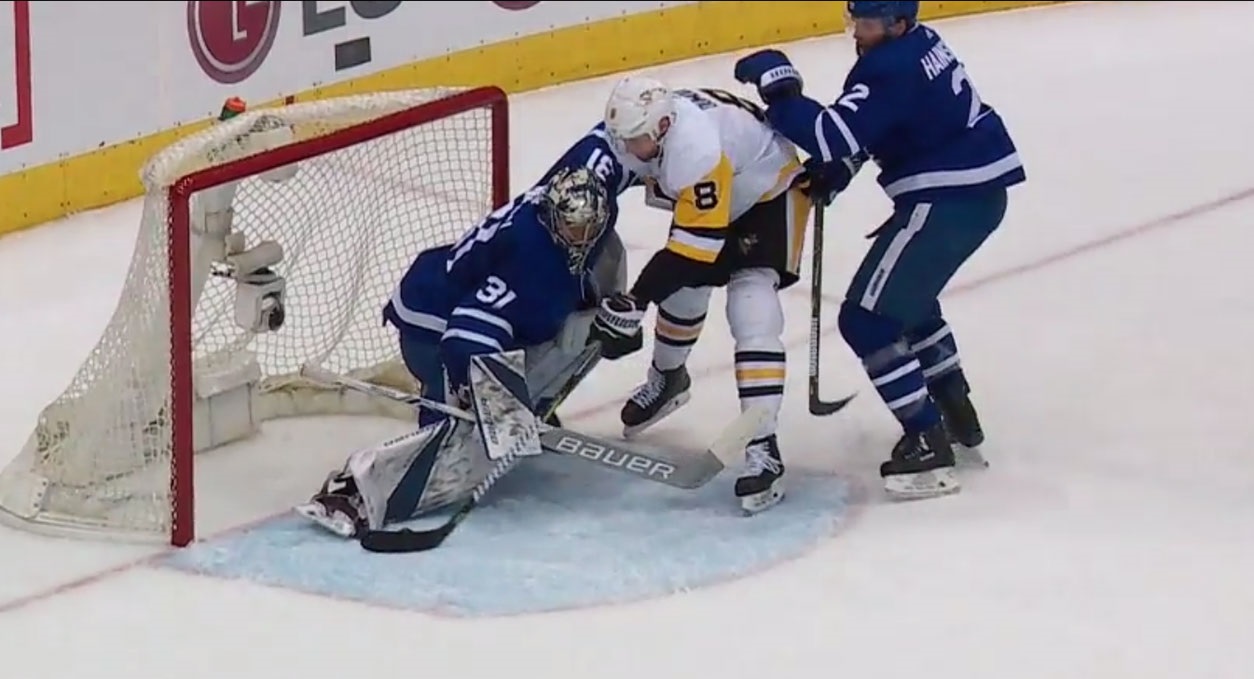 69 is sucking the life out of hockey.

On Saturday night in Game 69, the Penguins were the latest team on the wrong end of 69 – Rule 69: Interference on the Goalkeeper. While there were other reasons the Pens lost in Toronto, it was a key moment in the game. As Pensblog brother G-Off wrote in yesterday’s Leafs Quickcap/Stars Gameday: “Gotta put it behind you and get the two points tonight.” On a night when the Pens controlled more than 62% of shots on goal, shot attempts and scoring chances at 5-on-5, opportunities abounded to put the puck in the net. However, the Leafs capitalized at even strength and especially on special teams: 2 for 2 on the power play while killing all three of Pittsburgh’s chances.

But back to Rule 69. It’s one thing when fans and media have trouble interpreting this rule but when NHL coaches and players are still having difficulty understanding what is and is not goaltender interference with four weeks to go before the playoffs, then the NHL has a serious problem either with the way the rule is written or the way referees are applying it.

Stationed on the far side of the ice, along the goal line, referee Dean Morton immediately waved off the goal and just as quickly assessed a minor penalty to Dumoulin for goaltender interference.

The unusual part of this particular play from the Penguins’ perspective is that Morton rushed to both wave off the goal and make that penalty call before consulting the other officials. Even after speaking to an understandably pissed-off Sullivan and finally conferencing with the second referee and linesmen, Morton stuck with his no-goal call. Hockey Night in Canada told viewers that this play was not reviewable since the goal was waved off and a goalie interference penalty was assessed, but if I’m reading Rules 69, 78 and Reference Table 16 of the NHL Official Rules correctly, there is actually a provision that allows for this exact type of play to be challenged and reviewed. Here are the relevant parts:

On replay, we can clearly see Dumoulin’s former defense partner Ron Hainsey giving a gentle, but significant shove to Dumoulin’s back that moved the Penguin closer to Andersen. Moreover, Hainsey skates behind Dumoulin trapping him in the crease. After Dumoulin sweeps the puck past Andersen’s right pad, Dumoulin raises his right leg to avoid contact with Andersen’s left pad but Dumoulin’s right elbow hits Andersen’s head. If Hainsey hadn’t pushed him, would Dumoulin really have been skating within contact distance of Andersen?

Reference Table 16 Interference on the Goalkeeper Situations: … 3. A PLAYER PUSHES, SHOVES, OR FOULS ANOTHER PLAYER INTO THE
GOALKEEPER, WHO IS IN OR OUT OF THE CREASE. A. The attacking player, after having made a reasonable effort to avoid contact, makes contact with the goalkeeper at the time a goal is scored: Goal is allowed.

The Rulebook is clear: when the defending team’s player initiates contact and pushes the attacking player into the goaltender, that is not interference and a puck entering the net should be credited as a good goal. That is why it is puzzling that Morton reacted so quickly. By emphatically calling off the goal seconds after the play occurred, he is implying that he saw every factor involved in this play in real time. He is implying that he determined Hainsey’s slight push of Dumoulin toward the crease was insignificant and stuck with the parts of Rule 69 that disallow goals due to an attacking player independently initiating contact against the goalie. Morton’s thought process and conclusions are certainly within the shadow of a reasonable doubt.

In the grand scheme of things, this was one play, but of course, the overall additive effect on the NHL’s image is starting to become significant as teams struggle to understand the application of the goalie interference rule.

One can imagine where this is headed: 2018 Stanley Cup Final Game 7. Overtime. Every hockey fan in North America and worldwide is watching a similar play unfold. Jostling in front of the net. Contact between the defenseman, the puck carrier and the goalie. The puck enters the net.

The officials confer, skate to the boards and put on the headset, sending the play to Hockey Operations for video review as fans loudly groan…

It’s been 19 years since the “Brett Hull Skate in Crease” fiasco. Will we see another Stanley Cup champion decided on a Video Review rules interpretation?

That Grover compiled this data and posted it 20 minutes after the play is nothing short of a Hall of Fame effort.