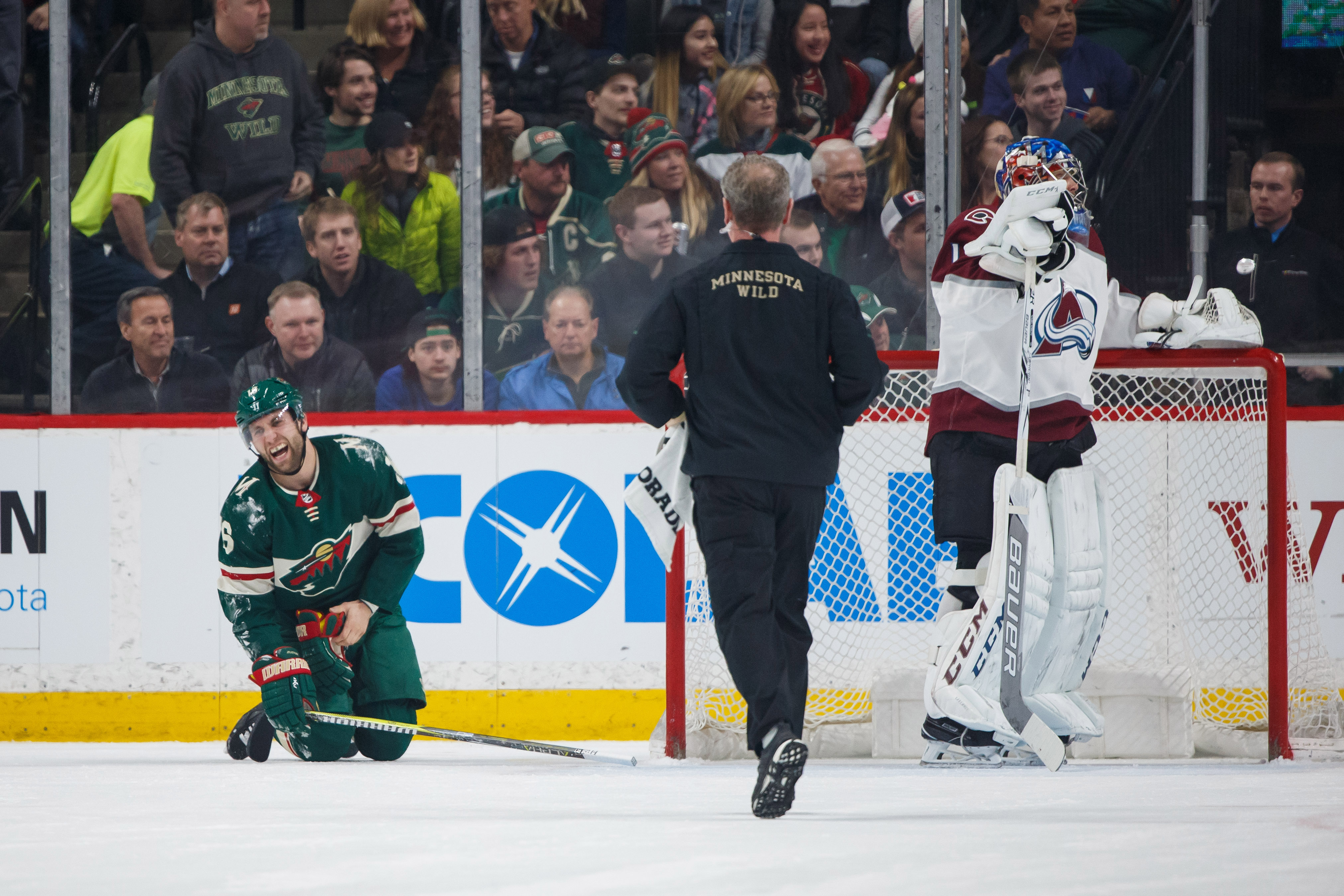 In the comedy film, Meet the Millers there is a scene where the characters poke fun at a young man who has an error on his ‘No Regrets’ tattoo.  ‘No Regrets’ is a refrain you often will hear a person say in reflection at the conclusion of some event in their lives.  I feel pretty confident the Wild would say they have no regrets after the way they played against Edmonton despite losing 4-1.  Minnesota moved its feet well and created a number of quality scoring chances but give credit to Cam Talbot for playing so well between the pipes.

Yet if you were to ask the team how it played against Colorado the last two games, there is probably plenty of regrets.  The Avalanche have trounced the Wild a few times this season and no doubt Minnesota will hope to avenge those losses tonight and not just for symbolic or self-esteem reasons.  The game matters to both clubs as they both scratch and claw for the post-season.  Can the Wild leave Colorado tonight with no regrets?

1st Period Thoughts:  The pace was fast and frenetic as both clubs certainly seemed focused to bring their A-game tonight.  Minnesota looked like a club that wanted to be on the attack and the top line of Eric Staal, Jason Zucker and Mikael Granlund swarmed all over the Colorado zone as they narrowly missed connecting on a close in chance for Staal and then moments after that Zucker tried to find Granlund on a backdoor play.  Minnesota was really moving well and the Avalanche found themselves pinned in their own end of the ice.  The second line was causing some havoc too as Charlie Coyle was protecting the puck well and sending pucks out to the point where Jared Spurgeon and Ryan Suter were letting go shots from the point that Semyon Varlamov was seeing pretty well and steering them wide.  A scary moment would occur fairly early in the game as the top line was looking to give the Wild a lead but with a puck sitting near the side of the net, Zucker would take a wicked two handed slash from Blake Comeau just prior to colliding into the right post where he writhed in pain.  Minnesota training staff went out to the winger who clearly was in some agony and appeared to be holding his wrist in a fashion that would indicate it was broken (I told you this was scary) and he’d head to the locker room.  Moments after that Minnesota went after Comeau and the officials gave him a tripping call much to the annoyance of Avalanche head coach Jared Bednar.  On the power play the Wild moved the puck quickly looking for one-timers from the point as Matt Dumba tee’d up a few blasts wide of the mark.  The Wild would adjust by moving up Niederreiter to play on the top line while Zucker was out.  The next few minutes had the Wild still moving their feet well but without Zucker’s speed they seemed to have a tougher time at generating quality scoring chances.  Colorado was being badly outshot but it didn’t matter as they finally entered the Wild zone and J.T. Compher sent a shot top shelf just next to the right faceoff dot that beat Devan Dubnyk over the shoulder.  1-0 Avalanche on a soft goal that Dubnyk has to stop.  The cheap stuff continued as Tyson Jost took offense to a hit by Nate Prosser and he’d go after the Wild defenseman and cross check him in the face which started a fracas near the Wild bench.  Ultimately it was Joel Eriksson Ek who skated in to defend his teammate and Jost going to the box for coincidental roughing calls.  Varlamov had played well but the Wild’s quality of chances really declined with Zucker off the ice.  Yet I am sure the Wild had to feel a little frustrated at trailing 1-0 despite out shooting Colorado 12-5.

2nd Period Thoughts:  A collective sigh of relief could be seen across the State of Hockey at the sight of Zucker sitting on the bench to start the period.  Although it would be clear he was not at 100% when he’d finally get his first shift as he struggled to handle the puck and wanted nothing to do with shooting it.  The after whistle scrums continued as both clubs were chirping and shoving was likely going to result in a fight.  Gabriel Landeskog would get into an altercation with Prosser after he leveled the Avalanche forward just to the right of Dubnyk.  Both would get sent to the box as they continued to chirp at one another and kept the conversation lively in the penalty box.  With the ice a bit more open 4-on-4 the Wild would light the lamp as Coyle turned on the jets after a turnover in the neutral zone creating a 2-on-1 with Koivu and Coyle made a perfect pass to Koivu who beat Varlamov, tying the game at 1-1.  Unfortunately, the Wild would relax defensively and Colorado would answer back just a minute later as Comeau found Nikita Zadorov alone in the slot and the big defenseman hammered a blast from the high slot that went off the post and in.  2-1 Avalanche as Boudreau yelled some curse words from the bench at the half-hearted defensive zone coverage.  Matt Dumba was literally just skating aimlessly in little circles out there.  The chippy play continued as the period came to a close as Zadorov went knee-to-knee on Jonas Brodin.  The Wild would go after Zadorov who clearly moved his leg out to make the knee-to-knee collision and after more chirping from both teams as they went to the locker room.

3rd Period Thoughts:  The 3rd period started off disastrously as Nathan MacKinnon realized he had Mikko Koivu covering him and he’d turn on the after burners as he’d fly by the Wild captain and swing a shot on goal from just beneath the faceoff dot that beat a handcuffed Dubnyk.  3-1 Avalanche.  Minnesota would try to answer back but they’d get an even worse injury scare as Jared Spurgeon would fall awkwardly into the boards that seemed to make his left ankle buckle as he made contact.  Spurgeon tried to get up but quickly realized that wasn’t going to work and he’d lay on the ice while Wild trainers would attend to the skilled defenseman where they helped him off the ice.  He wasn’t putting any weight on the left skate and appeared to be having great difficulty as he went to the Wild locker room as Dr. Joel Boyd was there waiting in the tunnel to help out.  Now being down their best puck-moving defenseman the Wild tried to rally back with a power play and they came dangerously close to cutting the lead to one as Dumba rang a one-timer off the right post and out.  A few minutes later with the Wild would hit another post, this time on the penalty kill as Coyle set up Zach Parise for a shot on a 2-on-1 shorthanded rush and Parise found the crossbar.  Colorado would add a goal a few minutes later as Compher got knocked down but still wired a shot by a flailing Dubnyk who may have got caught trying to embellish a minor bump by Carl Soderberg.  The Wild would challenge for goaltender interference but the officials ruled it was good enough for them and the goal would stand, 4-1 Avalanche.  Minnesota would start taking penalties out of frustration as they’d slash Alex Kerfoot as he tried to enter the Wild zone.  On the ensuing power play, the Avalanche would add insult to the injuries with another power play goal as Tyson Jost swept in a rebound.  5-1 Colorado victory.

Congratulations to all of the teams for what was another fantastic tournament.  Here is a summary of the tournament as well as the major post-season awards as well as the ever popular Hockey Hair video courtesy of Game On! Minnesota and John King.

Class A Champion:  Orono 2-1 over Alexandria

D – Braydyn Chizen (Kelowna, WHL) ~ the lanky defenseman isn’t a big point producer but he’s ‘heating up’ by his modest standards as he had another assist (his 2nd in his last two games) in the Rockets’ 4-2 win over Kamloops on Friday night.  Chizen has 5 goals, 18 points, 74 PIM’s and is a -16 in 58 games.

D – Louie Belpedio (Miami, NCHC) ~ the stocky senior defenseman had a helper in the Redhawks 5-2 loss to St. Cloud State on Friday.  He then helped set up the game winning goal in overtime on Saturday against the Huskies.  The Skokie, Illinois-native (who is rumored to be close to signing a 2-year deal with the Wild) has 9 goals, 30 points, 40 PIM’s and is a +4 in 36 games.

LW – Avery Peterson (Minnesota-Duluth, NCHC) ~ the former Mr. Hockey from Grand Rapids is heating up just in time for the Bulldogs as he had a goal in their 5-0 rout of Western Michigan last night.  Peterson has 6 goals, 11 points, 29 PIM’s and is a +3 in 27 games.

RW – Nick Swaney (Minnesota-Duluth, NCHC) ~ the freshman forward was back playing on the Bulldogs top line where he chipped in the primary assist on Peterson’s goal in the Bulldogs 5-0 demolition of the Broncos last evening.  Swaney has 5 goals, 21 points, 4 PIM’s and is a +6 in 28 games.

C – Jordan Greenway (Boston U., H-East) ~ the rugged power forward centered the Terriers’ 2nd line as he had 2 goals on 4 shots in the Terriers’ 5-4 OT win over UConn last night.  The former U.S. National Development Team star then had an assist in the 2-1 series clinching victory on Saturday.  Greenway has 12 goals, 30 points, 46 PIM’s and is 1 +7 in 31 games.

RW – Brandon Duhame (Providence, H-East) ~ the skilled winger was on the Friars’ 2nd line last night as he registered an assist in their 4-3 win over Maine on Friday.  The next night, the Florida-native delivered with a goal and an assist (6 shots on goal) in the Friars’ series clinching win over the Black Bears.  Duhaime has 6 goals, 24 points, 64 PIM’s and is a +11 in 36 games.

G – Dereck Baribeau (Quebec, QMJHL) ~ the big goaltender had 23 saves in the Remparts 5-4 win over Val ‘d Or on Friday.  The victory improves Baribeau’s record to 22-15, 2.95 goals against average and an .894% save percentage with 4 shutouts on the season.

RW – Dmitry Sokolov (Erie, OHL) ~ the Russian winger continues to terrorize goaltenders as he netted two goals on 4 shots in Erie’s 6-4 win over Peterborough on Saturday.  Sokolov has 48 goals, 90 points, 18 PIM’s and is a +2 in 61 games.