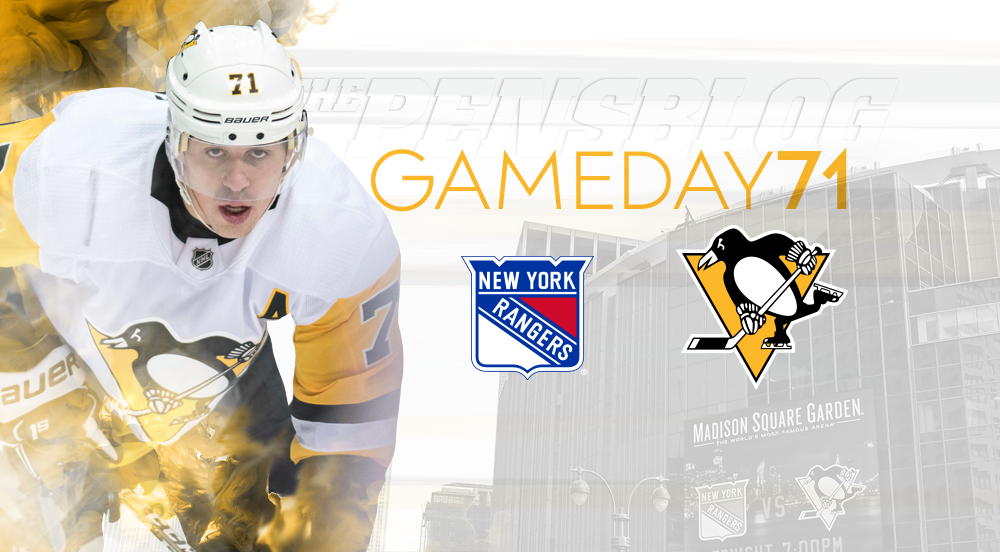 After a frustrating set of back-to-backs over the weekend the Penguins received a nice two day break before starting their next set of back-to-backs beginning tonight in New York and ending tomorrow night in Montreal. During the extra off day the Penguins gave us some good news as Bryan Rust joined practice and eventually finished it in a full contact jersey and Matt Murray finally faced shots in a controlled environment. Both players are expected to travel with the team during this trip but Murray isn’t likely to play tonight and has a low probability tomorrow since he still has to complete a full practice without symptoms the next day. So what can we expect from the competition tonight?

If you recall the Rangers sent out a letter to their fans preparing them for a massive sale on deadline day that resulted in the team shipping veterans Rick Nash and Ryan McDonagh to playoff bound teams while stockpiling draft picks and prospects. Since the deadline the Rangers have continued playing .500 hockey most recently going 4-4-2 in their last 10 to bring their current record to 31-32-7, a not so #nice 69 points that sits in last place in the Metro division. Since we are talking about it the rest of the division looks like this:

Some separation has finally occurred between the top 5 and the bottom 3 thanks to the combined 9-13-8 record in the last 10 games by Carolina, the Islanders and the Rangers. One of the biggest things on the current radar is the 5 game win streak by the Blue Jackets coupled with the Flyers 4-5-1 play has added some uncertainty to the top 3. The Capitals were off last night as well as tonight so the Penguins can once again gain the top seed in the Metro with a win tonight though they will have 2 more games played than the Caps.

The good news for the Penguins is the Rangers didn’t trade Marc Staal so Sidney Crosby’s neck isn’t safe tonight. Just looking at the Rangers defense you can see the effect of the sell off as there are 3 players you’ve heard of and 3 you haven’t. This could result in a long night for the Rangers if the Penguins lines can get rolling and give this young group of defenders fits. Lundqvist should start for the Rangers but due to the Penguins recent dominance over him and the season already being over it wouldn’t surprise me to see his current backup Georgiev in net. As for the Penguins these are the lines that Sullivan used in practice yesterday with the biggest switch involving Bryan Rust going to the third line after the immediate chemistry between Guentzel-Sid-Sheary was sparked once again. Kuhnhackl, Jooris and Rowney all rotated on the wings and honestly who cares which 2 flank Sheahan tonight, it is a game against the last place team in the division and the fact that the only problem people are complaining about is the 4th line wing says a lot about this team. I am assuming Jarry gets the nod tonight but DeSmith has played very well lately and it wouldn’t be too shocking if the Pens opt for him. The Penguins defense should be very similar to what we’ve seen in the last few games though if there was ever a time to give Letang a rest it would certainly be either tonight or tomorrow.

Since the calendar turned we are once again being reminded that this is Evgeni Malkins world, and when he is on top of his game there are few current players in the NHL that skate with such confidence. Every time Geno picks up the puck you get that excited rush go through your stomach and that split second thought that even though he is 150 feet away from the net he might walk through everyone. He is at that level right now and it is just too much fun. Soak it up man because the performances he has been putting up will be the ones we’re still talking about in 20 years when people are arguing the current league leaders. Nikita Kucherov added 3 assists in last nights loss to Ottawa giving him a 91 to 87 point lead over Malkin and though he says he doesn’t care about it Geno is too competitive to completely not care.

The Penguins have been playing textbook Sullivan-era Penguins hockey for the last two months and if they do that again it will most likely be the toughest test since the deadline for this defense. To say the Penguins third line of Rust-Brassard-Kessel is a mismatch over the O’ Gara-Gilmour pairing is putting it nicely. The Rangers may attempt to hide this pairing and shelter their minutes but they still have to deal with the Penguins top 6 that doesn’t have Phil Kessel on it. Though the teams the Pens will face in the playoffs won’t have these mismatches this is a great chance to remember how incredibly lucky we are to have the combination of a front office, GM, and coach that want nothing but Stanley every year.

The Penguins have an excellent opportunity to put two points up in the standings and further separate themselves from the Flyers in third. Tonight is the start of the 16th set of back-to-backs for the Penguins this season, if you recall they have 19 this season, so yeah they still have 3 sets left despite only having 10 games remaining after tomorrow night. Including tonight the Penguins only play playoff bound teams in 5 of their remaining 12 games leaving them with 7 games that they should win. It starts with a solid performance against a weaker team tonight, but just because they are weak doesn’t mean they won’t want to take one more shot at the champs.