Islanders finally have some fun In 4-1 win over Penguins 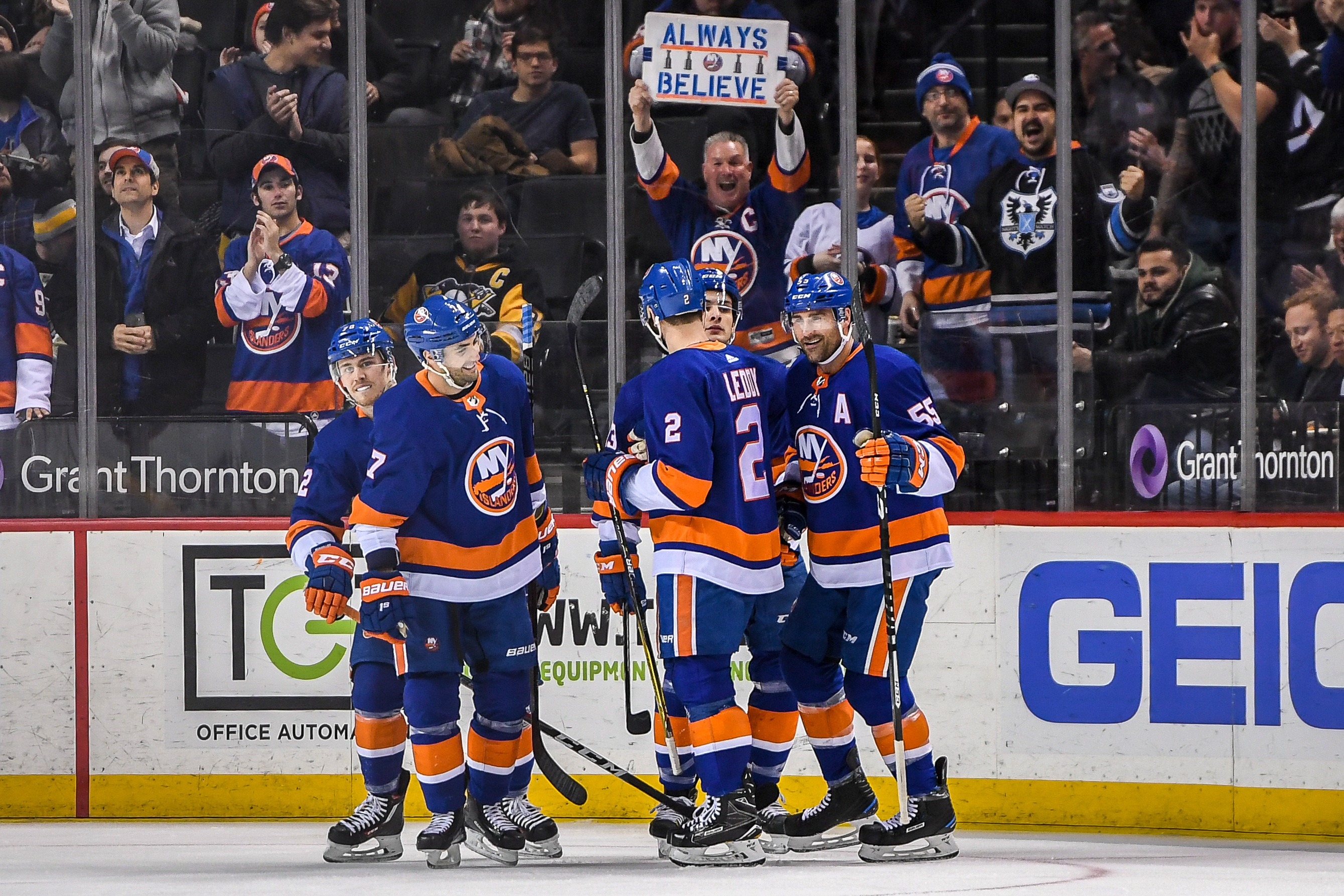 Islanders finally have some fun In 4-1 win over Penguins

NEW YORK — The Islanders walked off the ice and went through their usual routine after a win on Tuesday.

Each player fist-bumped the security guard that stands watch outside their locker room. The music — Chance The Rapper’s “All Night (feat. Knox Fortune) — blared loudly as it has in the past after a win and Mathew Barzal dapped up the guard before entering the dressing room after being named the first star of the game.

Even head coach Doug Weight seemed to break from his usually frustrated state with a small joke during his postgame press conference.

Moments of levity have been far and few between in recent weeks with the Islanders floundering out of the playoffs, but Tuesday’s 4-1 win over the Pittsburgh Penguins looked like the Islanders were finally having some fun for the first time in a while.

“I think throwing aside as well as I thought we played, they needed it,” Weight said. “It’s morale. It’s not where we want to be and we’re all disappointed in it, but we get paid to play every game. They played today like they wanted to win. They wanted to have that feeling, so we just want to keep growing it and try to win on Thursday.”

"I don't think anybody would have thought he'd have over a point-a-game and play the way he's playing. He's come on fast and hard."

Tuesday’s win over the defending Stanley Cup champions was the most complete effort the Islanders have had in some time and it was just their third regulation win at home in 2018. New York controlled the pace of the game for a majority of the 60-minute affair and outshot the Penguins 40-37.

It was the first time the Islanders had recorded 40 or more shots on net since January 20, when they put up 46 against the Chicago Blackhawks. The Islanders also scored on the power play for the third consecutive game and has six power play goals over their last three contests.

“We’re obviously in this position where it’s tough,” Anders Lee said. “We came out here and all we can do now is take it day by day and game by game. Try to win as many hockey games as possible. It does feel good. We beat a good hockey team tonight and we move on to another good one against Tampa.”

The Islanders jumped to a 1-0 lead 5:10 into the opening period. New York forced a turnover behind the net and worked the puck out to the point where Johnny Boychuk fired a shot from just above the left faceoff circle.

The shot was deflected by Barzal, who was slowly coming across the net, and beat Matt Murray.

New York extended their lead to two goals goal around five minutes later. Tanner Fritz left a drop pass for Adam Pelech, who fired a hard shot from the high slot that found the back of the net.

Connor Sheary cut the Islanders lead to one at 17:14 of the second period off a cross-ice feed from Phil Kessel, but Ander Lee put the Islanders back in front by two with his 36th goal of the season at 5:41 of the third.

Jordan Eberle put a bow on the game with an empty-net goal with 2:29 left in the third period.

“We love to play hockey and everyone hates losing,” said Christopher Gibson, who made 36 saves in the win. “It’s big for us to fight until the end here and we’re playing for the team and the organization and each other in the dressing room. (The win) is really important.”

The Islanders have nine games remaining in what is easily one of their most disappointing seasons to date. And with playoff-bound teams like Tampa Bay, Toronto, New Jersey and Philadelphia still on the calendar, the Islanders aren’t expected to win too many more games down the stretch.

But wins like Tuesday’s were a needed boost in a tough time for the franchise.

“It’s great just for the locker room,” Mathew Barzal said. “The last month, we’re obviously in a tough spot and it’s going to be a frustrating last (nine) games here, but winning is going to lift our spirits a little bit. Hopefully, we can make the best out of it.”