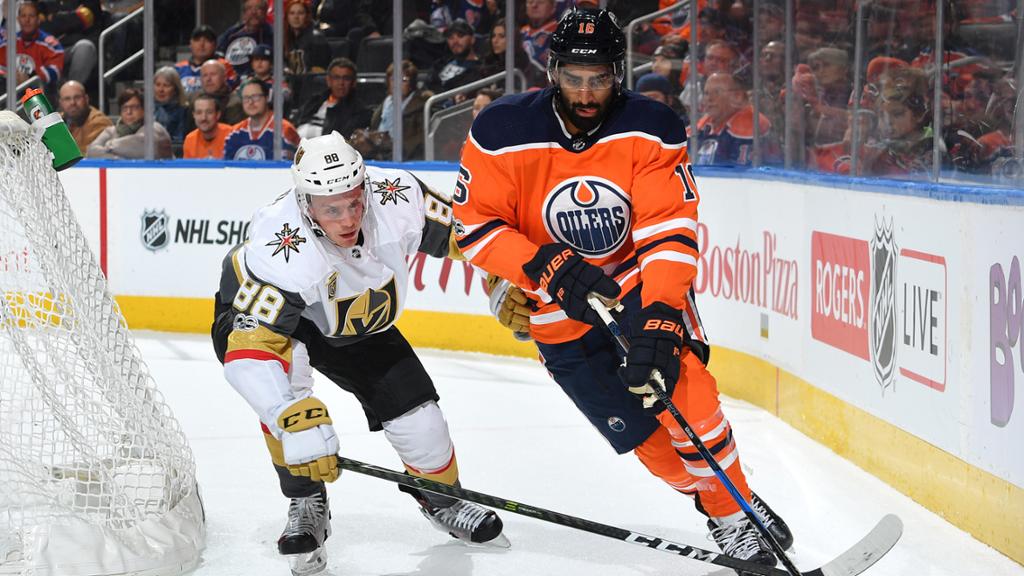 Good things can emerge from lost seasons. For the Edmonton Oilers, during a disastrous 2017-18 campaign, Jujhar Khaira is one of those good things. After being a third round pick in the 2012 NHL entry draft, Khaira has finally emerged as a useful NHL player who should be back with the club next season.

Barring a trade, Khaira will be back and will be a value contract for a club sorely in need of them for the 2018-19 season. Khaira is scheduled to make $675,000 against the cap next season, meaning he represents one of the few value signings on Peter Chiarelli’s roster.

That said, I think Oiler fans need to take a step back when it comes to Khaira. Far too many people are placing him far too high on the depth chart for next season. I’ve seen people place him on the second line for next season, others on line three. While Khaira is a good story and surely an NHL’er, people must keep expectations in check.

Jujhar Khaira is a solid role player at the NHL level, and should be penciled in as Edmonton’s fourth line center for the 2018-19 season. Anything beyond that likely means that the club failed to address holes this coming summer and once again will be relying on players to replicate career years. As we’ve all seen, that’s a dangerous game to play.

Khaira has emerged as a favorite for many Edmonton Oiler fans this season. I’m one of those people that has immensely enjoyed watching him play this season. Khaira has jumped from an afterthought in the summer to a guy that I want in the lineup next year and a player I both like and respect.

In a league where the enforcer role is basically dead, Khaira has emerged as the modern-era enforcer with the Oilers. What I mean by that is while Khaira is still willing to drop the gloves, and is very effective while doing so, he also has decent speed, can penalty kill and has enough skill to belong in the league on merit. He’s the new tough guy in professional hockey.

In addition to being willing to both play a physical style and drop the gloves, Khaira is a solid penalty killer for the Oilers. The PK has been a huge issue all season for the club, but in their recent good stretch of play Khaira has actually been a catalyst for the group.

If I had my way, only Khaira, Ryan Nugent-Hopkins and Iiro Pakarinen (as the 14th forward) would return as PK forwards next season.

There is a little offense to Khaira’s game as well, evident by his career high eleven goals on the season. The 23-year-old forward has 11-9-20 on the season, which is excellent production from a fourth line player. Factor in his Corsi-For % of 50.6 and you have a pretty solid depth player.

If Khaira is going to have that fourth line center role, as opposed to a left wing spot, the one thing he’ll need to improve are his face-offs. He’s won just 45.9% of the over 300 draws he has taken this season.

Khaira’s Corsi-For rating and his offense are nice, but they are in a fourth line role. Expecting him to duplicate that kind of performance while moving up the lineup will only get the club in trouble. It’s what the Oilers expected from guys like Drake Caggiula, Anton Slepyshev and Ryan Strome this season. Clearly those bets did not work.

Khaira has found a nice role for himself on Edmonton’s fourth line, and the club should keep him there moving forward. In today’s game more than ever, you need four lines that can play hockey. Khaira’s role might not be a major one, but it is an important one and he is good at it. Keep him in that spot and let him center a fourth line that can intimidate opponents, saw off possession and score the occasional goal.

I’ve seen people mention that Khaira’s eleven goals on the season are an indication that he can do more offensively. Maybe that’s the case, but we should look to his shooting percentage as a cautionary tale. Khaira is shooting at 16.9% this season, an extremely high amount. In ten NHL games a year ago, Khaira shot 10%. He shot less than that during his AHL stint in Oklahoma City and Bakersfield.

The goal total this season is nice, but from here it looks like a spike in shooting percentage that cannot be duplicated year over year. It’s something to look at if you think Khaira can handle a top-nine role.

Jujhar Khaira is one of a few nice stories from this lost season in Edmonton. He’s emerged as an NHL option and will return next year on a value contract. That said, Peter Chiarelli and Todd McLellan, should they still be in their jobs, should take this year’s failures to heart when it comes to players like Khaira.

Jujhar has done quite well in his fourth line role. Keep him there, let him play on the penalty kill, let him stand-up for his teammates and contribute some offense from a depth role. Don’t overvalue the player, however, and assume he can step into a larger role because of this good season. That’s bad business and it is a big reason why this club is where it is.

Khaira will be a nice piece for Edmonton’s bottom-six moving forward, but for now that should be the extent of his role with the club.