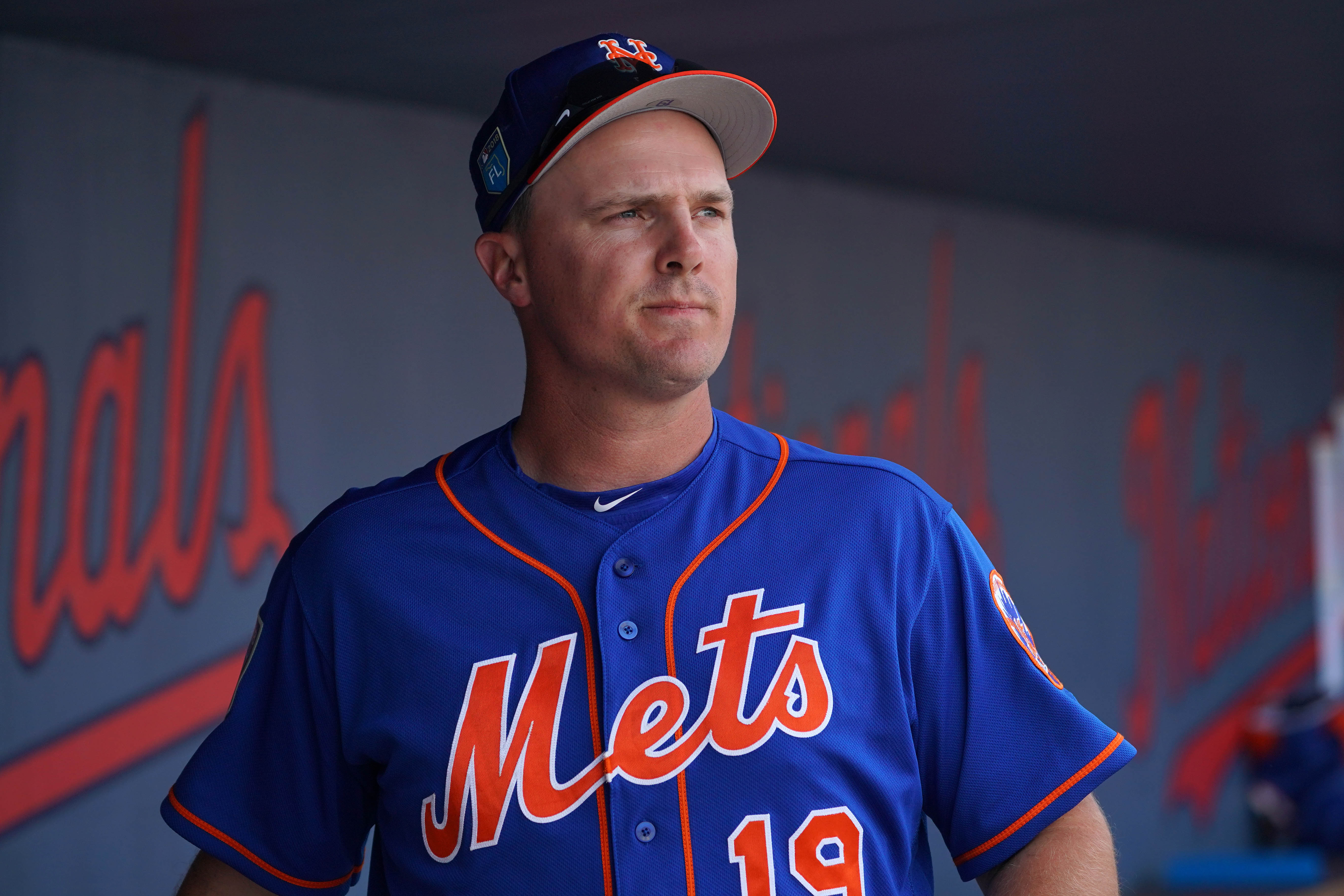 We are now nine days away from Opening Day, which means that MLB teams need to figure out their 25 man rosters soon. The New York Mets’ roster appeared mostly set entering the season, with a stable group of position players and battles for spots in the rotation and bullpen. Exhibition results and an injury to Jason Vargas have cleared up the situation a bit, and the Mets’ latest round of cuts helped shed some more light on the team’s thinking. With that in mind, let’s take a stab at how the Mets’ 25 man roster will look when they take on the St. Louis Cardinals on March 29th.

d’Arnaud and Plawecki entered camp as the favorites to platoon at catcher, and nothing changed to alter that thinking. The Mets assigned Jose Lobaton to minor league camp today, paving the way for d’Arnaud and Plawecki to be the catching duo. Many presumed that d’Arnaud would get the bulk of the playing time, but Plawecki’s strong spring may change that equation.

There was talk of a competition for first base this spring, but Dominic Smith’s early quad injury ended it before it even began. Gonzalez hasn’t done a ton, but he will be the Mets’ starter on Opening Day, although Flores will end up platooning with him against lefties. The rest of the group is set.

This is another group that hasn’t changed since the start of camp. Michael Conforto will eventually join the mix, but the Mets will start with a platoon of Nimmo and Lagares in center. Nimmo has had an excellent spring and should get the lion’s share of the playing time with the Mets in need of a leadoff hitter. Lagares will probably start against lefties and be a late inning sub while rumors swirl about the Mets shipping him out in a trade.

The addition of Vargas created a competition between Matz and Wheeler for the final spot in the starting rotation. A fluke injury has now sidelined Vargas for a month, allowing both pitchers to crack the Opening Day rotation. This means that, by accident, the Mets will have their fab five lined up to complete a turn through the rotation for the first time ever. Vargas should return by mid-April, so Matz and Wheeler will need to pitch well in their first two starts to maintain their rotation spots.

The Mets have hinted at an eight man bullpen all spring, and they will likely follow suit on their Opening Day roster. The first five spots are locked, leaving three up for grabs. The Mets have been working on using Gsellman as a reliever of late and he has delivered good results, so he should claim one spot. Another should go to youngster Jacob Rhame, who the Mets acquired in the Curtis Granderson trade last August and has had an excellent camp. The last spot comes down to one of Montero, Hansel Robles, and Seth Lugo. Lugo has pitched the best of those three, but he is pitching with a partial UCL tear, so the Mets would prefer to have him pitch on a regular routine. It also makes sense to leave Lugo stretched out in Triple-A as rotation insurance, leaving the last spot down to the terrible call of Robles or Montero. Both have been awful, but Montero is out of options and the Mets have shown almost unlimited patience with him, so odds are that Montero claims that last spot so the Mets don’t risk losing him. This spot could change if the Mets make a bullpen acquisition in the last week of camp, something Alderson did in 2015, when he swung deals to land Blevins and Alex Torres. A similar trade, or a free agent signing (like Greg Holland or Ubaldo Jimenez), could be in the cards if the Mets don’t feel comfortable relying on Montero or Robles right now.