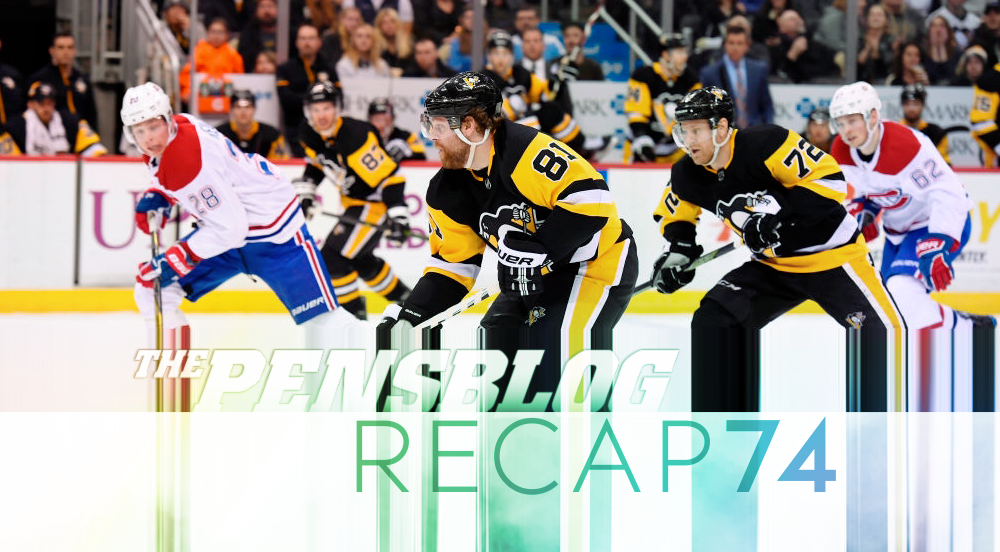 What do two penalty shots, a shorthanded goal, two goals that bounced in on odd angles, a linesman getting cut open by a skate, a fight, and Sidney Crosby’s 700th career assist all have in common? This game, of course. In a night that ended with 5-3, the goals (Crosby’s notwithstanding) were probably the least interesting part of the game. No, seriously.

The first period started off normal enough, Paul Byron ended up in alone on Casey DeSmith (in net on the second half of the back-to-back) but the netminder stoned him. So picking up where they left off last night. Well, next thing you know Brassard is getting hooked and surprisingly the refs decided to call the penalty shot. Unfortunately, Carey Price was back tonight after a month-long layoff with a concussion and he was Carey Price on Brassard’s attempt. No worries though, because after an icing call which Jonathan Drouin whined about Gene Bean pocketed a goal. He was in 4th in the scoring race, after all, couldn’t have that. Julien challenged for goalie interference because he didn’t know if it was and none of us did either. Refs ruled it wasn’t. Good goal, we continue.

Malkin's goal gives him 90 points for the fourth time in his career.

He is one of four players in the NHL with 90+ points this season. pic.twitter.com/NAyOlI0m97

Hornqvist doubles the @penguins lead with a PP goal. pic.twitter.com/6bIrWrl6k1

Then, with under a minute left Jonathan Drouin remembered he was playing the Penguins and scored his obligatory goal. 2-1 at the end of 1.

The second period of this game was quite frankly one of the strangest I’ve seen in my time around hockey. It started with the games second penalty shot, this one to Brendan Gallagher. DeSmith with DeSave and we continue.

Next thing I know there’s a random fight? As Oleksiak is taking on McCarron? I have no idea. But Oleksiak won so, I guess that’s good? Then things got really weird. Guentzel is coming up the ice and Byron shoved Guentzel. What Byron didn’t know is that Jake was next to a ref. Jake and the ref go tumbling and Bake ends up on the ice. He was no worse for the wear but approximately 0.2 seconds later he was called for holding. Then there was another penalty, this time by Montreal. Gallagher high-sticked Letang so we played 4-on-4 and then, just as the Penguins are getting the man-advantage, shenanigans ensued. Scherbak somehow ended up alone in the Penguins zone with the puck. With so much time he could have built a house, he beat DeSmith. 2-2.

Then suddenly the Canadiens are in the Penguins zone and the puck is doing it’s pinball impression again. DeSmith makes a save but it bounces directly up in the air over his head and the rebound goes right to a Habs player, 3-2 for Montreal. Then Sidney Crosby happened. Less than 40 seconds later, “Captains got to teach stuff” Crosby said get on my back losers and tied it up with a goal so ridiculous I was actually yelling “What did I just witness?”

We went to the second intermission tied 3-3. Oh and at some point in there, an official had to race down the tunnel because he was cut by a Habs player’s skate. Seriously.

The third wasn’t really much to write home about after the second. Early on, the Canadiens took a penalty and the second unit cashed in as Brass Monkey got funky.

Brassard has 20 goals for the second time in his career… and his point streak is now at 4 games (1G-3A). pic.twitter.com/O6qWvctiMQ

The Canadiens put pressure on but nothing the Penguins couldn’t handle and the visitors didn’t even get the chance to pull their goalie because Jake Guentzel ripped an absolute bullet past Price making it 5-3 for the flightless birds.

Notes
– Crosby got his 700th assist on the 5th goal. That puts him third among active players behind Thornton and Sedin both of whom have played more than 1000 games. Crosby hasn’t even played 900, so that’s cool.
– Malkin hit the 90 point mark for the 4th time in his career, which is also cool. He has 91 points now which puts him second in the league.
– Guentzel had a 1-2-3 performance including setting up the game-tying and game-winning goals. His third-period goal also broke a 12-game goalless drought.