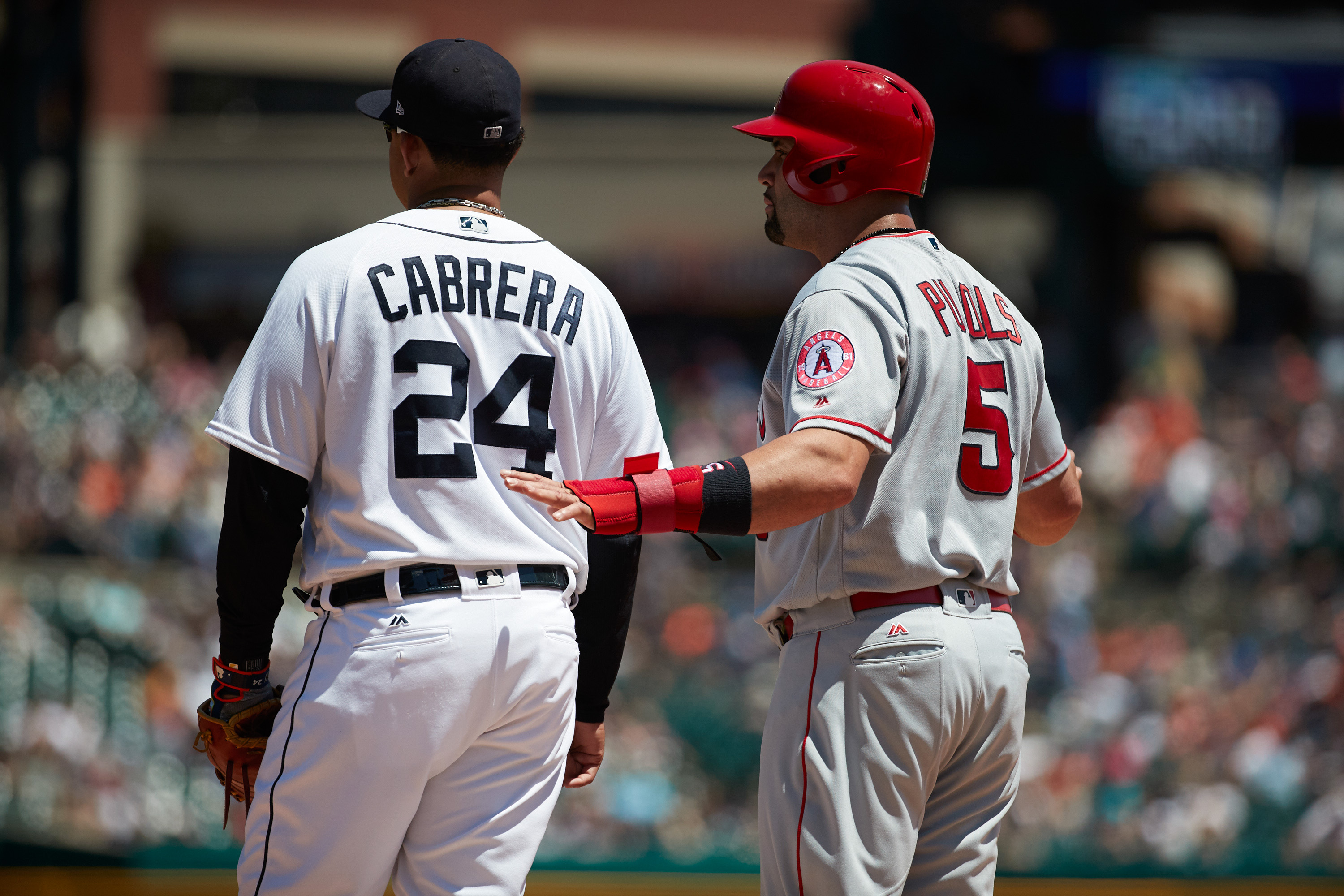 When talking about baseball’s best right-handed hitters since the turn of the century, it’d be criminal to not have Miguel Cabrera and Albert Pujols be the first two names to roll off your tongue.

Their past performance and reputation will seemingly have these two connected forever, but the similarities continue when looking toward 2018 and beyond. It’s just a different kind of comparison they’re not used to.

The sterling track record these two sluggers have formed over the course of their careers have made them awfully wealthy, ya know. It’s also come in the form of a long-term commitment that will effectively take them to the end of their playing days, which we’ll continue seeing less of moving forward.

Pujols is preparing to enter the seventh season of a 10-year, $240 million contract he signed with the Los Angeles Angels. This has him on L.A.’s payroll through 2021, which will be his age-41 campaign. If that wasn’t already bad enough from the team’s perspective, this deal is also backloaded — Pujols has been making $20-plus million since 2014, but is set to make $27 million this year, a number that will increase each season by $1 million until he hits the $30 million plateau in his final year.

The past production prior to signing these enormous deals could justify such a significant commitment for what will be the downturn of their respective careers. At the moment, though, there’s an uphill climb for both Pujols and Cabrera to provide even a fraction of value to make this investment worthwhile.

When looking at it on the surface, Pujols has stayed on the field rather consistently for Los Angeles. After all, he’s appeared in at least 149 games in five of the six years he’s been with the team. While that’s good and what any team would prefer from a player in which they’re so deeply tied to financially, he hasn’t been fully healthy most of the time.

He’s spent many of the last few offseasons rehabbing from some kind of surgery, with the most recent operation being in December of 2016 to repair his right plantar fascia. His status for Opening Day in 2017 was up in the air, but he was able to suit up for the Angels. It just didn’t go well at all (which we’ll get to).

Miggy has also been rather consistent with regard to taking the field every single day, and despite appearing in at least 148 games 12 times in the last 14 years, the two occasions where he didn’t reach that threshold has happened in the last three years.

Detroit’s first baseman was limited to 119 games in 2015 because of a calf strain and back problems, while a groin strain and continued back issues plagued him in 2017. Back injuries are typically tricky to deal with, and depending on the severity, it can impact a player for the remainder of their career — just ask David Wright about that. Cabrera was dealing with two herniated disks in his lower back last season, which clearly hindered his on-field play.

If we take a look at Pujols’ traditional counting stats, he’s remained pretty consistent.  According to Grand National, he has hit at least 23 homers while collecting 95-plus RBI each year since 2014. When we look at some advanced stats, though, the Machine has been on the decline for a while.

After posting 2.8 fWAR in 2014, that number has dropped each season, culminating in a -2.0 mark last year that was easily the lowest number among qualified hitters. His wRC+ has also taken a similar dive, with his 78 wRC+ from 2017 marking the first time that number has fallen below 100, breaking a streak of 16 straight seasons above the century mark.

The counting stats have always been there for Miggy, but his struggles and time on the disabled list last year led to just 16 homers and 60 RBI, which haven’t been that low since he was a rookie.

Trying to Turn Things Around

At this point, it’s pretty clear that Pujols and Cabrera have been traveling parallel paths throughout their careers. They’re both inner-circle Hall of Famers and the best right-handed hitters of this generation, but they’re also dealing with the wrong kind of trifecta right now — advancing age, a growing injury history, and declining performance.

When we add in their mammoth contracts, it’s the kind of uphill battle we typically don’t see ending well for the players involved. But if there’s one small silver lining we can find through all this, it’s their respective batted-ball profiles from 2017.

Most of these rates don’t look drastically different from their career numbers, and in Miggy’s case, his line-drive rate and hard-hit rate landed among the league leaders.

The days of these two being among the game’s a elite hitters may very well be over, but if they can stay healthy, the potential to remain somewhat productive for just a little bit longer is there (at least, more than they were last year). It’s not going to be easy, but it’s certainly not impossible.

After an entire career of being mentioned in the same breath, Pujols and Cabrera probably wouldn’t mind sharing one last similarity — ending their respective careers better than most expect them to.