Gameday 75: The Devil of the Matter 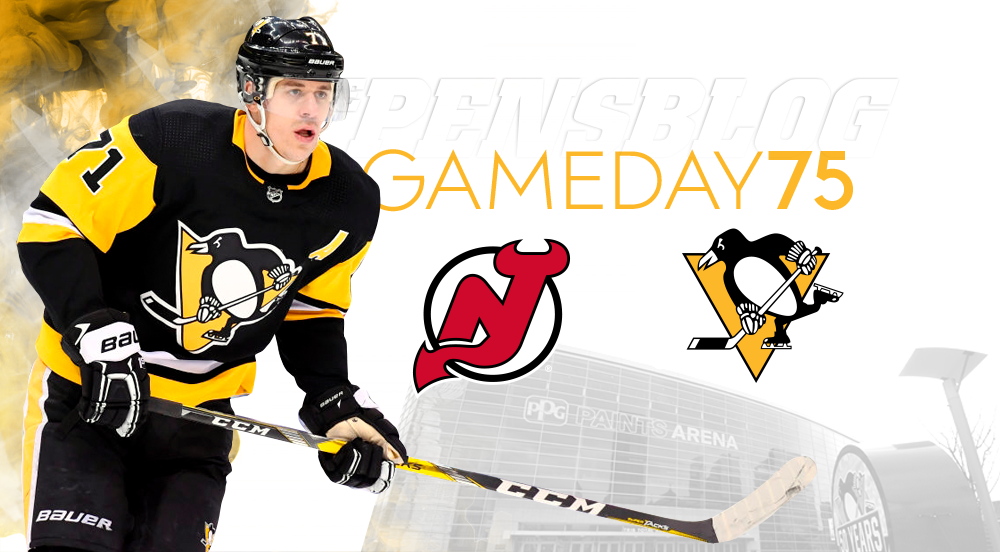 Gameday 75: The Devil of the Matter

After splitting yet another back-to-back the Penguins are ready to take on their toughest challenge in a few games as the square up against the Devils. New Jersey has been that surprise team that everyone has been waiting for the regression but to the surprise of most it hasn’t happened. The Devils are currently holding down the final Wild Card spot in the East as they are trying to fend off the surging Panthers. New Jersey currently sit on 82 points in 73 games played while the Panthers are just 1 point behind with only 71 games played. The Devils are feeling the heat from Florida and are wrapping up a 6 game road trip tonight that saw the team swing through the West coast, the Devils are 3-2 on the trip but have dropped their last two. Life doesn’t get any easier for New Jersey as they return home tomorrow to face the top ranked Lightning.

When it comes to the Penguins the Devils have given them fits, in both prior meetings the Devils have put up 38 shots and have scored on 3 of them, beating the Pens 3-1 and 3-2, respectively. The Penguins have a chance to put themselves closer to clinching a 12th consecutive playoff spot with a win over New Jersey tonight, but it will take a complete team effort to get over the issues that the Devils have given them. In their first meeting the Pens were held to just 16 shots, in the second they managed to match New Jersey’s 38 but still couldn’t put more than 2 in.

If the Penguins win out at home they tie the 92-93 and 95-96 teams for most home wins in a season, in order to do that they will have to beat the Devils and Flyers within a three day span. These are the type of matchups that you want to see the Penguins playing to finish up their season. After the Flyers they have the Canadiens, Caps and Senators left at home.

As we have been doing with every game this late in the year here is the latest look at the standings following a Philadelphia win last night:

The PIT-NJ matchup is the only Metro game tonight so these won’t change too much tonight, but as you can see the Blue Jackets recent 9 game win streak has resulted in the Penguins fighting to maintain pace for home-ice in the playoffs.

The Penguins didn’t do anything different in practice yesterday so I wouldn’t expect any changes to the lines we saw on Wednesday night against Montreal. I would expect Matt Murray gets in tonight which would mark his first game against the Devils this year as DeSmith has played in both of the previous meetings. Lately the Penguins have looked completely uninterested in playing regular season games and I can’t really blame them, they’ve won the cup twice and the only thing separating them from a chance at destiny is a few regular season games against mediocre at best teams for the most part. Tonight on the other hand the Pens know they have to play a potential playoff matchup and it will be interesting to see if we witness the “we’re the champs and you can’t beat us” style of play for the first time in a few weeks. Any doubts that currently rest in our minds that the Pens will be able to “flip the switch” come playoff time would go away with a 60 minute dominant performance tonight.

FOR PITTSBURGH:     THE FIRST LINE

There was a time the first line was THE line in Pittsburgh but recently things haven’t been going their way as Crosby and Guentzel can’t seem to get on hot streaks at the same time. Perhaps the game in Montreal where both players scored big goals and had very good games was just the spark that these guys needed to give the Penguins that lethal 3 line weapon that they have been after all season. With Brassard scoring in 4 straight games and the Malkin line having Malkin on it the Penguins are a clicking first line away from being beyond scary for all playoff teams. Cory Schneider wasn’t and option for the Devils in the last two meetings and Kinkaid gave the Penguins all they could handle. Schneider is back for New Jersey and the two are splitting the goaltending duties but you have to think Hynes puts Kinkaid back between the pipes for this one based on his success so far this season. Kinkaid has stopped 51 of 54 Pittsburgh shots this year for a cool .944 save percentage against the team. If the Penguins are going to have success tonight they are going to have to find away to get shots on goal and to get those shots in.