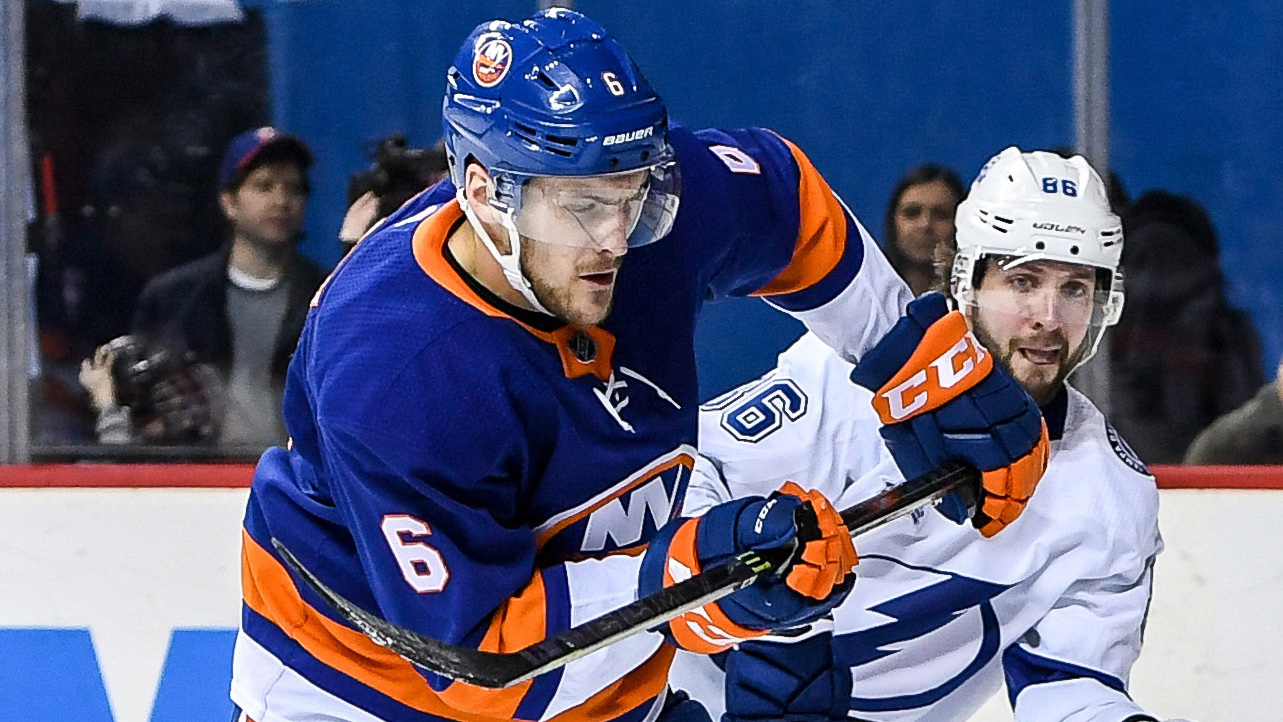 NEW YORK — When the Islanders awarded Ryan Pulock a roster spot during the 2015-16 season, the 2013 first rounder was looked at as the big answer with an even larger shot to be inserted into the Top-4 among Nick Leddy, Johnny Boychuk, Travis Hamonic and Calvin de Haan.

Somehow, somewhere, Pulock was going to make one of those men expendable and lead the defensive core for years to come.

But, it didn’t translate right away.

“We saw him play in Bridgeport, I think a lot of people saw his numbers and said: ‘Ok, can’t wait to see this kid,’ and it didn’t translate right away,” head coach Doug Weight said after Thursday evening’s 7-6 nail-biting defeat to the Eastern Conference powerhouse Tampa Bay Lightning.

“He played like this down there. He’s got a lot of confidence right now.”

When a player has arguably been the team’s best overall defenseman for the past three months, has a slap shot that makes Johnny Boychuk’s seem easier to grab (it’s not, don’t try it) and is averaging close to 20 minutes per game since December, how could you not have an overabundance of confidence?

Yet, the 23-year-old right-handed defenseman remains humble and focused on improving daily.

“Just trying to improve every aspect of my game and have a strong finish here and hopefully that can kind of lead towards the start of next year,” Pulock said.

It’s a feel-good story for the Dauphin, MB, CAN native. He bounced in and out of the lineup during the start of the season but injuries to his defensive teammates opened the door for an opportunity – an opportunity he took and skated away with.

“Just getting the opportunity, being able to play every night, you know, not having a whole lot of experience in the league, it’s tough to be at your best every single night,” Pulock said. “I tried to build throughout the year defensively and it go to a point of being so comfortable with it, that I looked to take my offense to the next level.”

Truth is, to expect a young player to transition his game and thrive if he doesn’t play every night and gets quality minutes is silly. He’s young and has room to grow. The extra minutes were surely beneficial.

And, about that confidence, why wouldn’t he have it? Pulock has a slap shot that surpasses 101 miles per hour and makes any goaltender’s glove hand sting if they’re lucky enough to snag it. Fans – and even coaches – were screaming for him to use it more. He learned plenty about it from Boychuk.

“I just try to let it go,” he said. “I can just keep improving. I want to be reliable defensively and want to be in position late in games and see where it takes me.”

The Ryan Pulock coming out party took place on January 20. Its location: United Center, Chicago, IL against the Blackhawks. If you missed it, boy, you missed a helluva party.

One goal. Four assists. Plus-3. Two power play points. Four shots on goal. That was his line. Not bad for a guy playing his first full year in the league.

“That Chicago game was lucky in a sense,” Pulock admitted. “Just threw pucks on net. When you’re able to do that you gain confidence in yourself and try to build off it every single game.”

Pulock used the confidence from that tilt and has built off it since. He was arguably the best player on the ice against Tampa Bay. You can argue he has been the Islanders biggest threat offensively and defensively (besides Anders Lee) for the last three months.

After he was fully engulfed into the starting role on defense, Pulock ramped up his film sessions, worked hard behind the scenes and worked on his defensive and skating technique.

It has shown. The former first rounder taken 13th overall finally found his game. The sky is the limit for him.