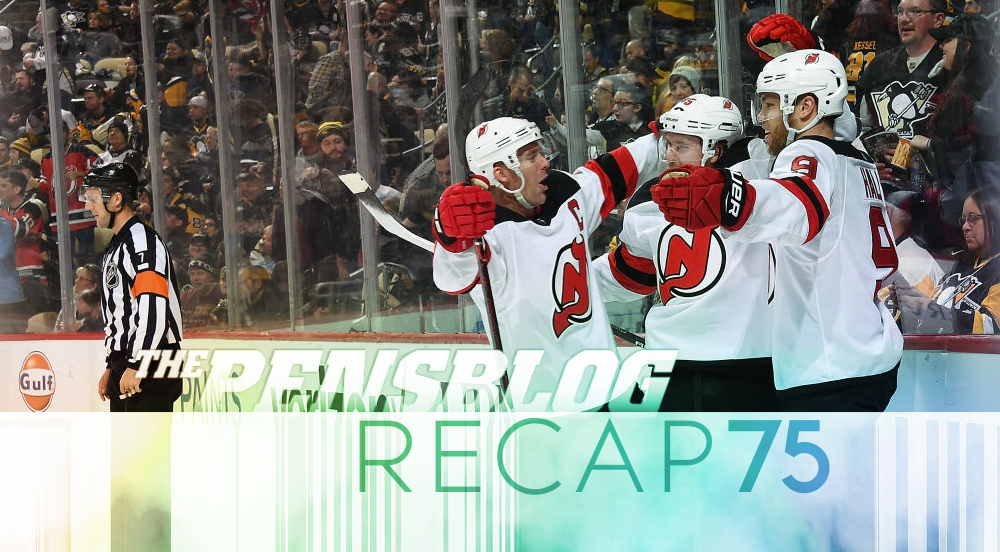 We now interrupt the scintillating debate about whether or not Connor McDavid should win the Hart Trophy (hint: no) to bring you a recap of the Pens-Devils game.

In the first the Penguins were a freight train pushing the Devils from the word go and less than three minutes in Crosby did what Crosby does best in the springs lately He put one behind the goalie. It wasn’t as pretty as his last one but hey, it still gave the Penguins three 80+ point getters for the first time since they had four in 2000-2001 (Jagr, Straka, Kovalev, Lang.)

The #Pens now have three players with 80+ points for the first time since the 2000.01 season. pic.twitter.com/Z1WXeVtnlH

Honestly, the Pengu were all over the Devils in this early part of the period and Keith Kinkaid is the only reason they didn’t go up more. The rest of the period, the Devils pushed back and got the shots close to even (15-12 PIT at the end of 1) including a great chance for Taylor Hall that Matt Murray stopped. Then, right as the period was winding down Stafford took a penalty and the Penguins were on the man-advantage for about 30 seconds and then the remainder when the second started.

As has been kind of usual lately, some looks but nothing doing on the peep. As has also been usual lately, the team sleepwalked through this period. Lazy passes, overthinking, all the hallmarks of them not stepping on the throats of a team they are better than because they’re over it.

Unfortunately, New Jersey didn’t have the same problem. So when a call that Taylor Hall drew on Bryan Rust turned into a Will Butcher goal things went a little sideways. Just about two minutes after Butcher’s goal the second was summed up in one sequence. The Penguins were possessing in the New Jersey zone and had a great chance that in the blink of an eye turned into Blake Coleman (no I had no idea who he was before this game either) scoring on an unreal effort. No really, it was a thing of beauty and it’s hard to fault Brassard, who did everything right to defend him, or Murray, who did everything he could to stop the puck.

Still, 2-1 isn’t terrib-WHAT DO YOU MEAN CARL HAGELIN GOT AN OFFSETTING MINOR? Ugh. Yea, that’s right. When the Penguins should have been getting another shot on the power play suddenly it’s 4-on-4. Honestly, it was a dicey call at best. Then, because of course, he was tired of people saying Kopitar should win the Hart Taylor Hall set up Nico Hischier to make it 3-1. There was a moment of panic when the PK that “hasn’t been good since the trade deadline” was called upon and actually was pretty good. And the second period mercifully ended not long after so, that was good.

The third period. Ah, the third period. I don’t want to heap too much praise on the Pens overall third period performances because I did that to their OT performances and they haven’t won in OT since I did. So let’s just cut to the chase, Brian Dumoulin scored on a rocket launched from the SpaceX headquarters to bring the team within one.

This was all thanks to Crosby who, after having what one would call an average year for him seems to be getting hot, won a big face-off. Then Brassard and Kessel show off the chemistry they’ve been working on and team up to tie it. Honestly, Kessel’s shot was well, Kessel’s but Brassard’s play to bring the play into the zone was chef-kissing-fingers-gif good.

The rest of the third was full of shenanigans as both teams tried desperately to end it in regulation. Alas. We head to OT.

Going into this game, the Pens were 10-2 in 3-on-3 but were coming off of a loss to the Rangers. And of course, because Taylor Hall is tired of hearing about Connor McDavid or something, Taylor Hall scores to end it less than 30 seconds in. The Devils get the extra point. Penguins probably deserved a better fate tonight as they did own a lot of the game but their laziness at key moments, and Kinkaid being very good cost them the second point. And this is an important lesson to be reminded of now.

Notes
– Phil! scored 30 for the first time as a Penguin and set his career high in points with 83 (for now)
– There was a strange sequence in the third period where Malkin tried to go in alone and looked to be sealed off by the Devils only to end up dragging three of them around and at one point ending up with a heap of Devils under him.
– Schultz left briefly when he was smacked around by Gibbons but returned and finished the game so here’s hoping he’s alright (his head snapped back pretty violently).