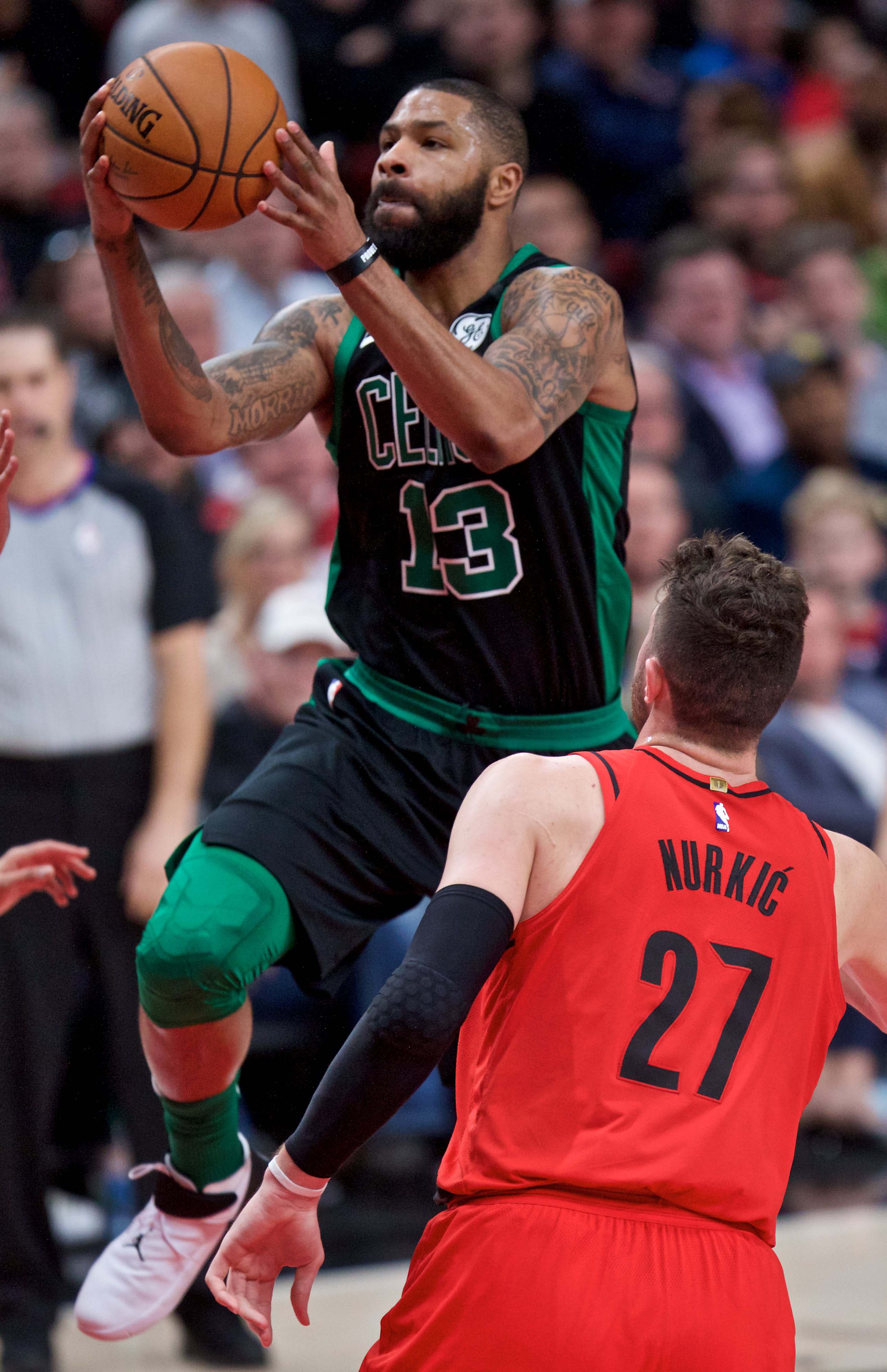 Marcus Morris’ second 30-point game of the week led the way for your injury-riddled Celtics, as Boston handed Portland just their third defeat at in their last 21 games at home. Final Score: 105-100.

Celtics fans will take every little victory they can get right now, so when Yabu had a good start to the game, Twitter basically exploded. You’d have thought the man went off for 20 in the first quarter, but nope! He just played some solid D and looked 10x more comfortable while out on the floor. When he scored on a drive in the first, we knew we were in for a weird kind of night. Portland’s 10-2 run during the quarter ultimately decided the quarter, though, and the Celtics went into the 2nd quarter trailing, 26-23.

While the outside shot was working (6 of 10), the Celtics struggled to score from inside the arc through out the first half (shooting just 11 of 31). They were outscored in the paint 32-14 over the course of the first half and had taken nearly 10 less 3PA than Portland during that same stretch.
Greg Monroe played well against Portland’s smaller lineups and was on pace for a triple double with 7 points, 6 rebounds, and 4 assists through two quarters (he’d finish in the double-digits for a season high 5th straight game with 10 points to go along with 10 rebounds through out the game).

Marcus Morris scored 14 at half then added another 16 over the course of the final two quarters. While many fans have complained of his shot selection this year (with good reason), Morris has continued to step up when the Celtics have needed him most. He finished with 30 points on a super efficient 9 of 13 shooting from the field and a couple of clutch plays down the stretch (more on that later). If it weren’t for his offensive burst, the Celtics would have went into the third quarter trailing by more than just 5.

Morris added 10 to his total in the third quarter, but the rest of the Celtics? They’d made just 17 of their 50 shots thus far. And compiling on the problem, the Celtics shot just two deep balls during the third quarter. That’s not a recipe for success, folks. Boston went into the final frame trailing 77-67.

Luckily, they were bailed out by some poised play by the rookie. After a rough start to the game, Jayson Tatum scored 10 of his 13 points during the final quarter and proved to be the spark the Celtics needed to get back into the game. Shane Larkin deserves honorable mention, too, for aggressively driving to the basket and continuing to find the open man (he’d finish with 9 points and 7 assists). The Celtics were officially within a possession of tying the game after Larkin and Tatum combined to go a perfect 5 for 5 during the first four minutes of the final quarter. Al Horford came in clutch, too, with a big 3 at the end of the game to go along with his normally-stellar defense and great decision making with the ball.

Marcus Morris gave the Celtics a 5 points cushion with under a minute to play after he hit a hesitation 3 as the shot-clock ran down – an appropriate end to a wild comeback for the Celtics.

Tonight’s @JetBlue Play of the Game honors go to @MookMorris2, who dropped 30pts, including this late shot clock 3 in crunch time. ☘️ pic.twitter.com/3TIqztO69Q

I think it’s fair to say Marcus’ knee is feeling much better.

Terry Rozier had another forgettable night, going just 4 of 14 from the field finishing with 16 points over 30 minutes of game action. He made this one when it counted, though.