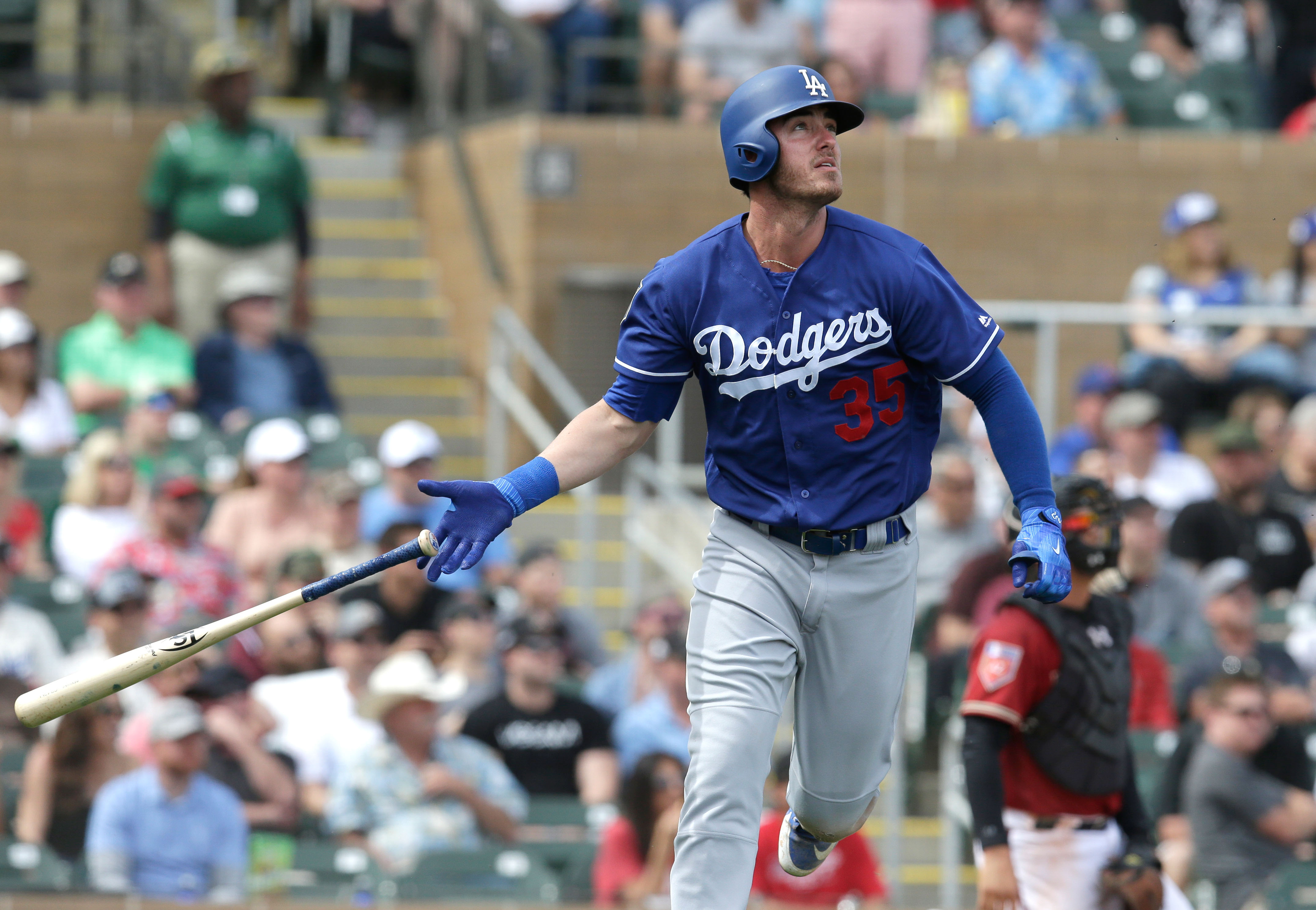 When it comes to the baseball diamond, we hear a ton about the ballplayers who are taking home the most money — whether it’s over the life of a certain contract or a single season. After all, if we put together a lineup with the highest-paid players at each position, it’d be pretty expensive.

MLB teams are doing the best they can to lock up their young talent as soon as possible — recent extensions for Paul DeJong and Scott Kingery are great examples of that — but there are still plenty providing elite production who have yet to reach arbitration.

With that in mind, we set out to find the game’s best pre-arbitration players at each position. To be eligible, a player can’t be in their arbitration years yet or signed to a long-term extension. We also stuck to only including players making below $1 million. So, is this list somewhat subjective? Yes, it is.

Without further adieu, here is the 2018 All-Value Team (all available salary info provided courtesy of Spotrac).

Contreras’ power didn’t emerge until a 55-game stint in Triple-A during 2016, but it’s carried over to the big leagues – he’s produced an ISO above .200 in each of his first two years.

That fly-ball rate is obviously below the league average, but it’s at least trending in the right direction (27.7% in ’16, 29.3% in ’17). With solid plate discipline, improving quality of contact, and an impressive second-half power surge from last year, he’s primed for a big year. Potentially having Ian Happ, Kris Bryant, and Anthony Rizzo batting in front of him won’t hurt, either.

Cody Bellinger has used that upper-cut swing of his to be a predominantly fly-ball hitter throughout his minor-league career. Things also worked out quite nicely upon getting the call for what eventually was a historic Rookie of the Year campaign. With a 47.1% fly-ball rate, 42.4% pull rate, and 43.0% hard-hit rate, nobody needs to wonder how he slugged 39 homers in 548 plate appearances.

The young left-handed hitter posted an .809 ISO on fly balls last season and did a good job of spreading the ball all over the field for this particular batted-ball event (32.3% pull rate, 34.2% up the middle, 33.6% opposite field). He turned 23.9% of those fly balls into homers, mostly thanks to a 51.0% hard-hit rate.

Through his first 332 big league plate appearances, Whit Merrifield had produced just 10 homers and steals combined (2 homers, 8 steals). Once the dust settled on 2017, he blew past those numbers in 630 plate appearances, to the tune of 19 dingers and 34 steals.

The power surge isn’t hard to figure out – take a look at how his batted-ball profile changed from one year to the next.

His overall hard-hit rate dropped just over five percentage points, but if we drill it down to only fly balls, that number climbed nearly three percentage points between his rookie and sophomore campaigns. How drastic of a turnaround was this? Well, Merrifield produced a -3 wRC+ in 2016 on fly balls, but increased that to 101 in 2017.

Shortstop is one of the hardest positions on the diamond to do this for. Honestly, you can’t go wrong whichever way you go – nobody could fault you for preferring a healthy Corey Seager or Carlos Correa here. Francisco Lindor has always been appealing from a value perspective because of his offensive consistency and defense, but he took things to another level last year.

Although he’s stolen at least 12 bags in each of his first three big league seasons, the power surge jumps out — after hitting 27 homers from 2015-16, he hit 33 in 2017 alone. Lindor posted an 8.3% walk rate and 12.9% strikeout rate for the second consecutive year, and drastically improved his quality of contact while putting the ball in play more than ever (86.3%) and swinging and missing less than ever (6.4%).

Lindor’s defense took a step back when looking at Defensive Runs Saved (5), but his 32 DRS since debuting in 2015 is third at his position to only Andrelton Simmons (75) and Brandon Crawford (48).

What’s even more encouraging, though, is that he took his performance up a notch following the All-Star break. Check out to see how his overall performance, power, and quality of contact improved as the year progressed.

It certainly seems as if the young third baseman still has plenty of room to go before reaching his ceiling. If that’s indeed the case, the Astros have once again struck gold with regard to getting incredible bang for their buck.

It’s unfair to draw any legitimate conclusions from just 212 plate appearances, but that Rhys Hoskins guy looks like he’ll be pretty good. With one of the hottest starts ever to a big-league career, the slugger finished with 18 homers, 48 RBI, and a 2.2 fWAR in just 50 games played.

That fWAR would’ve landed him in the top 100 had he accumulated enough at-bats to qualify for the batting title last year.

What really makes this intriguing is his plate discipline – Hoskins was the proud owner of a 17.5% walk rate, pairing that with a 21.7% strikeout rate during his first taste of big league action. His 38.3% swing rate suggests he was on the lower end of the spectrum, but a 7.1% swinging-strike rate, an 88.8% contact rate, and a 46.0% hard-hit rate tells us he knows how to make the most of his opportunities.

If you wanted to see Byron Buxton here, we can’t fault you for that.

The difference between these two, though, is that Pham put it all together from start to finish in 2017, while Buxton has struggled at the beginning various times. He does a little bit of everything, and with a 20-20 season already under his belt (23 homers and 25 steals) despite a 51.7% ground-ball rate and 26.1% fly-ball rate, he has legitimate 30-30 potential despite entering his age-30 campaign.

In fact, that’s his goal with 2018 on the horizon, who is fresh off an 11th-place finish in NL MVP voting last year.

It’d be impossible to not have Aaron Judge on this list, right? Anytime you can get someone with the potential of hitting 50-plus homers for less than $1 million, you gotta do it.

From what we’ve seen since his debut in 2016, Judge will probably be a regular atop the hard-hit rate leaderboards, as his 45.3% rate from last year was bested by only Joey Gallo (46.4%) among qualified hitters.

There will be plenty of people talking about his 30.7% strikeout rate, but let’s also not forget the progress he made between his cup of coffee in 2016 and then his first full season of 2017.

Judge received a lot of attention at the start of the second half because he was mired in quite a slump, but he still managed a 173 wRC+, .430 wOBA, .343 ISO, and 8.2 fWAR for the year. Just imagine what he could accomplish if he doesn’t experience such a slump this year – especially with Giancarlo Stanton hitting behind him in the lineup.

Gary Sanchez didn’t spent a bunch of time at DH last year, and it will probably stay that way moving forward when considering the Yankees’ current roster construction, but this is a solid way to get him on this list.

He followed up that insane tear as a rookie with an equally impressive sophomore campaign that included 33 homers, 90 RBI, a 130 wRC+, and a 4.4 fWAR over 525 plate appearances. And similar to Judge, a lot was made about a month-long slump back in July that resulted in a 69 wRC+ (nice).

Bumps in the road are going to happen to everyone, so it’s important to notice how quickly they recover and how long they can go before hitting another rough patch. After producing that 69 wRC+ with a .165 ISO and .668 OPS in July, he finished the regular season by lifting those numbers to 147, .299, and .944, respectively, over the final two months.

It’s also worth noting that through those struggles, his quality of contact remained consistent — Sanchez’s hard-hit rate dipped below 34.3% in just one month last year, which was a 30.9% mark in May.

It was probably rather predictable that we’d pick one of our dark horse Cy Young candidates to fill this spot, but that’s OK — especially when they have the kind of raw talent that Aaron Nola does. The most crucial part of his season will be staying healthy and taking the mound every fifth day for the Phillies.

We’ve talked about Nola quite a bit over the past few weeks leading up to Opening Day, so our feelings about him are clear at this point. And while spring training stats shouldn’t be taken too seriously, we should be encouraged by the 18 innings he threw in Grapefruit League action.

The young right-hander posted a 3.50 ERA with 18 strikeouts and just 3 walks. When looking at the quality of the batters he faced — thanks to Baseball-Reference — we know he faced competition that was between the caliber of Triple-A and MLB players based on his 8.4 score out of a possible 10.

Although Archie Bradley has spent just one year as a full-time reliever and has only one save in seven total chances, he’s the kind of pitcher that could find himself in many high-leverage situations this season. After being worth 1.8 fWAR in 2016 as a starter (in 141.2 innings), it only took him 73 innings last year to surpass that number, accumulating 2.1 wins.

Moving into the bullpen turned him into mostly a fastball-curveball kind of pitcher, and it’s hard to argue with the results — after allowing a 147 wRC+ and 59 wRC+ to opposing hitters off his four-seamer and curveball, respectively, in 2016, those numbers dipped to 62 and 25 as a reliever.