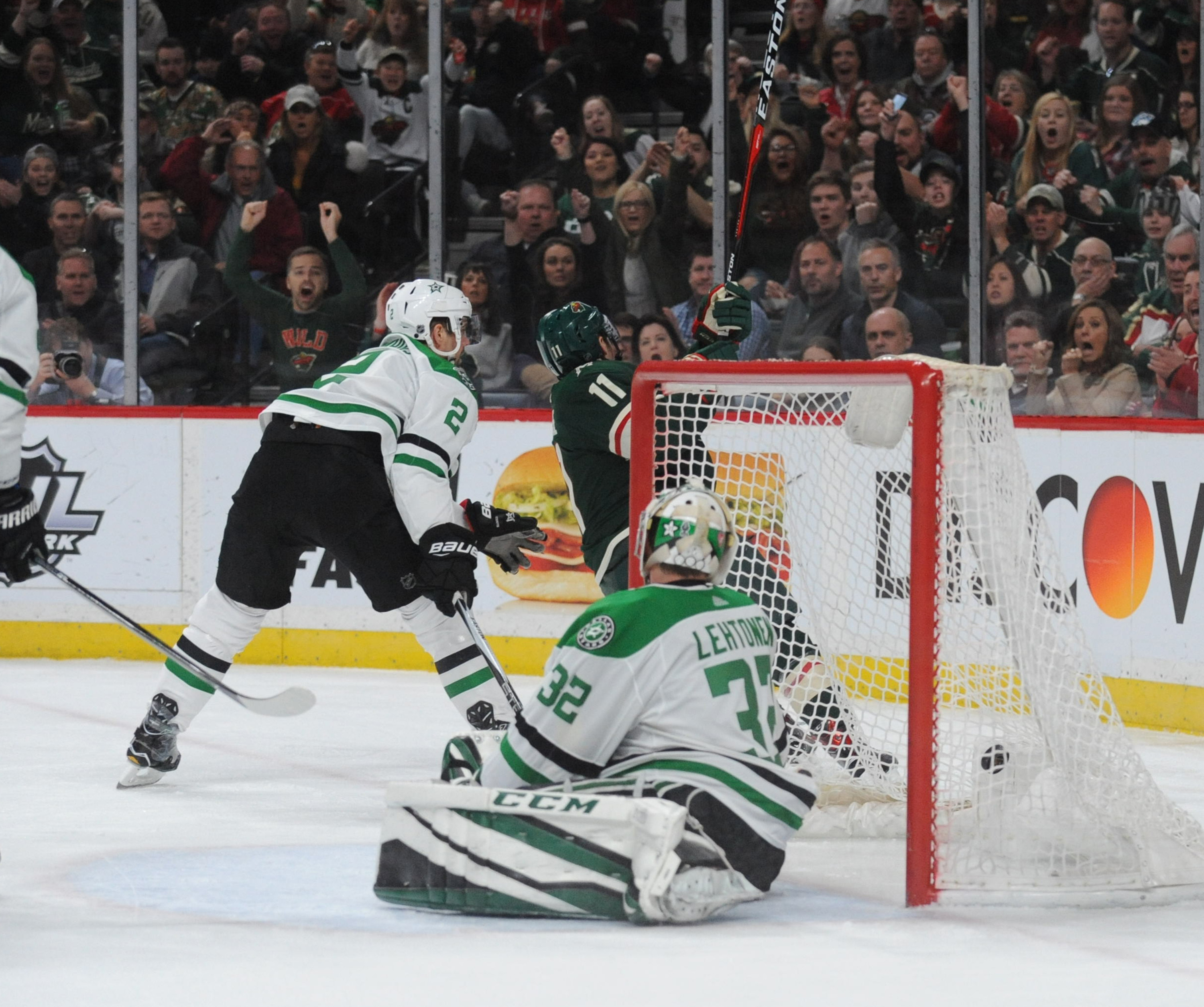 With outlets like Netflix, Hulu, etc people have a plethora of options for binge watching of TV series whether from cable or back in the antenna days.  One series I got strangely addicted to, was the bizarre mystery drama Twin Peaks.  The early 1990’s series starring Kyle McLachlan, Lara Flynn Boyle and Slap Shot‘s Michael Ontkean was well known for its mix of kitsch, art movie qualities and its complex storyline.  At times you ask yourself if you are watching someone’s drug-induced fantasy, but few shows make me focus on the details as much as this one does which makes it a perfect binge watching experience.  With the NHL’s crazy compressed home-at-home schedule for the Minnesota Wild on its home stretch it almost feels like binge watching the games.

Minnesota begins a home-at-home series against Dallas this evening and one where there is a fair chance they could clinch a spot in the playoffs if they’re successful.  The Stars have had a bizarro season of their own where the team appeared to have lots of promise only to watch the floor fall out from underneath them when goaltender Ben Bishop went down with an injury.  Can the Wild earn a win against Dallas or will we all be talking to a log by the end of the game?

1st Period Thoughts:  The Minnesota Wild started the game flatter than a stale pancake.  A very stale pancake as the desperate Stars were ready to work hard and playing an assertive, up-tempo style and the Wild sleepwalked through its shifts.  The Wild worked pucks deep into the Dallas zone but no one seemed to have any idea of how to send shots on Kari Lehtonen.  Dallas would strike first as Jamie Benn raced from the Stars’ bench and was all open int he slot and after a bad turnover by Nate Prosser deep in the zone the puck was swept up by Tyler Seguin for a quick set up that Benn buried.  1-0 Dallas.  The goal did not wake up the Wild as bad passes and generally reactive play meant Minnesota couldn’t get anything going offensively.  Minnesota’s defensive play also left a lot to be desired as Devan Dubnyk made a stop and then sort of laid down in his crease while more forwards kept swarming about in the offensive zone only to be bailed out by Gustav Olofsson who blocked a shot destined for the back of the net.  In the latter half of the period, penalties threatened to blow the game wide open for Dallas.  First was a hooking call on Charlie Coyle.  Minnesota’s penalty kill was a bit scrambly as Dubnyk and the Wilds’ penalty kill was able to get the job done.  However soon after the got the kill they’d again go a man down when Ryan Murphy high sticked Antoine Roussel in the face, drawing blood and giving the Stars a 4-minute power play.  However the desperate situation finally got the Wild to wake up and a turnover near the blueline became a 2-on-1 for Mikael Granlund and Mikko Koivu and as Granlund carried the puck into the Star’s zone he’d let go a heavy snap shot that beat Lehtonen high, stick side tying the game at 1-1 on the shorthanded tally.  The shorthanded goal got the team to start moving its legs and Dallas seemed to be a bit frazzled mentally as they fumbled away passes and Minnesota was able to get a huge kill.  It was a not bad finish to what was a pathetically sluggish start to the period.

2nd Period Thoughts:  The 2nd period was a better effort as the Wild had their legs working and the result was more offensive pressure and pucks finding the back of the Dallas net.  It got started on the power play as Benn was in the box for high sticking.  Minnesota worked the puck around the perimeter and Ryan Suter set up Matt Dumba for one-timer near the left faceoff dot that beat Lehtonen cleanly top shelf.  2-1 Wild.  You could sense a major momentum shift after the power play goal and the Wild would cash in again just 59 seconds later.  Dumba made a nice outlet pass to Mikael Granlund who got a step on Greg Pateryn and he lowered his shoulder and motored towards the Stars goal before making a short pass to a crashing Zach Parise for an easy tap in.  3-1 Wild.  Dallas would try to answer back with its top line of Benn, Seguin and Radulov and the Wild would get caught scrambling around their own zone for a solid minute but they came dangerously close as Seguin’s shot nearly trickled through before it was swept aside at the last moment by an alert Jonas Brodin.  The Stars would cut the Wild lead to one as Devin Shore made a terrific deflection of a Dan Hamhuis point shot that Dubnyk had no chance on.  3-2.  Minnesota had to be feeling a little anxious only up by one.  The Wild would draw a period late in the 2nd as John Klingberg tripped up Parise.  On the man advantage the Wild would cash in once again as shorthanded bid by Seguin missed wide and the Wild would counter attack and Eric Staal set up Jason Zucker for a one-timer that he buried to make it 4-1 Wild going into the 2nd intermission.

3rd Period Thoughts:  The Wild were content to play solid team defense and work pucks deep into the Stars’ zone to limit their ability to rally offensively.  It wasn’t without a few dramatic offensive chances for the Wild as Jordan Greenway came inches away for tallying his first NHL goal as he rang a shot off the post.  Minnesota was denying time and space and towards the latter half of the 3rd the Stars were clearly feeling defeated and frustrated.  Radulov would get tagged for hooking in the 3rd, and Minnesota more or less just killed time moving the puck deliberately and somewhat slowly as they did their best to avoid some gaffe that could turn into something positive for Dallas.  Minnesota tried to work for an exclamation point as a deflected Mikko Koivu shot just couldn’t be gathered up by Mikael Granlund for what would’ve been an easy tap in goal.  As the puck worked its way to the corner the Wild would negate the man advantage as Parise was tagged with a slashing minor.  Dallas now had almost a full power play to try to make a game of it late in the 3rd.  The Stars clearly appeared to recognize the importance of this opportunity as they worked the puck to an open Radulov who was denied by a nice save by Dubnyk.  Knowing their season could very well be in the balance, the Stars would call a timeout to discuss the man advantage but Minnesota would escape unscathed and earn a huge penalty kill.  With their team still trailing by two, Dallas would pull Lehtonen with 2:24 left to go in the game.  Minnesota did their best to try and deny the middle of the ice but Dubnyk made some nice saves with lots of traffic near his crease and the Wild did the rest by winning small battles for the puck along the wall and forcing Dallas to waste a lot of time.  Minnesota would put the nail in the coffin late in the game as Parise buried an empty netter to seal a 5-2 victory.

Devan Dubnyk did a nice job of recovering after giving up a goal on the first shot he faced where had 29 saves in the victory.  He got some timely help as Olofsson and Brodin both saved his bacon during the game.  Dallas had to settle for shots from the perimeter most of the game as Minnesota did a fine job of denying the middle of the ice.  The penalty kill came up big; especially on the 4-minute double minor in the 1st was a turning point as Minnesota took over after Granlund’s shorthanded goal.

Offensively the Wild took advantage of Dallas’ confusion and capitalized on their opportunities off the rush and on the man advantage.  Matt Dumba had a 4-point night; including a power play goal which is hopefully a sign of things to come as Minnesota had gone 1-for-26 with the man advantage before his goal in the 2nd period.  The Wild are at their best when they work pucks in close and they found a way to do so this evening.

The win puts Minnesota in great shape as they sit 5 points ahead of St. Louis and 6 points ahead of Colorado who has the same amount of games as the Wild while the Blues do have a game in hand on us.  It was a decent recovery after a flat start and they’ll face that same listless Dallas squad on Saturday.

RW – Dmitry Sokolov (Barrie, OHL) ~ the skilled winger is trying to help the Colts advance in the OHL playoffs but its been an uphill battle as he had a goal in Barrie’s 3-1 loss to Mississauga who leads the series 3-0.  Sokolov has 2 goals, 5 points, and is a +4 in 3 playoff games.

LW – Kirill Kaprizov (CSKA Moscow, KHL) ~ the immensely skilled winger continues to find more ways to impress as he had two assists (4 shots on goal) in CSKA Moscow’s 5-4 overtime win over SKA St. Petersburg earlier today.  Kaprizov has a goal, 8 points, 4 PIM’s and is a +3 in 11 playoff games.

C – Andrei Svetlakov (CSKA Moscow, KHL) ~ the 21-year old forward made the Minnesota Wild’s Top 10 prospect list in the Hockey News‘ latest Future Watch issue and he had an assist in CSKA’s 5-4 OT win over SKA St. Petersburg.  Svetlakov has seen very limited action in the post season as he has just the lone assist in 2 playoff games.