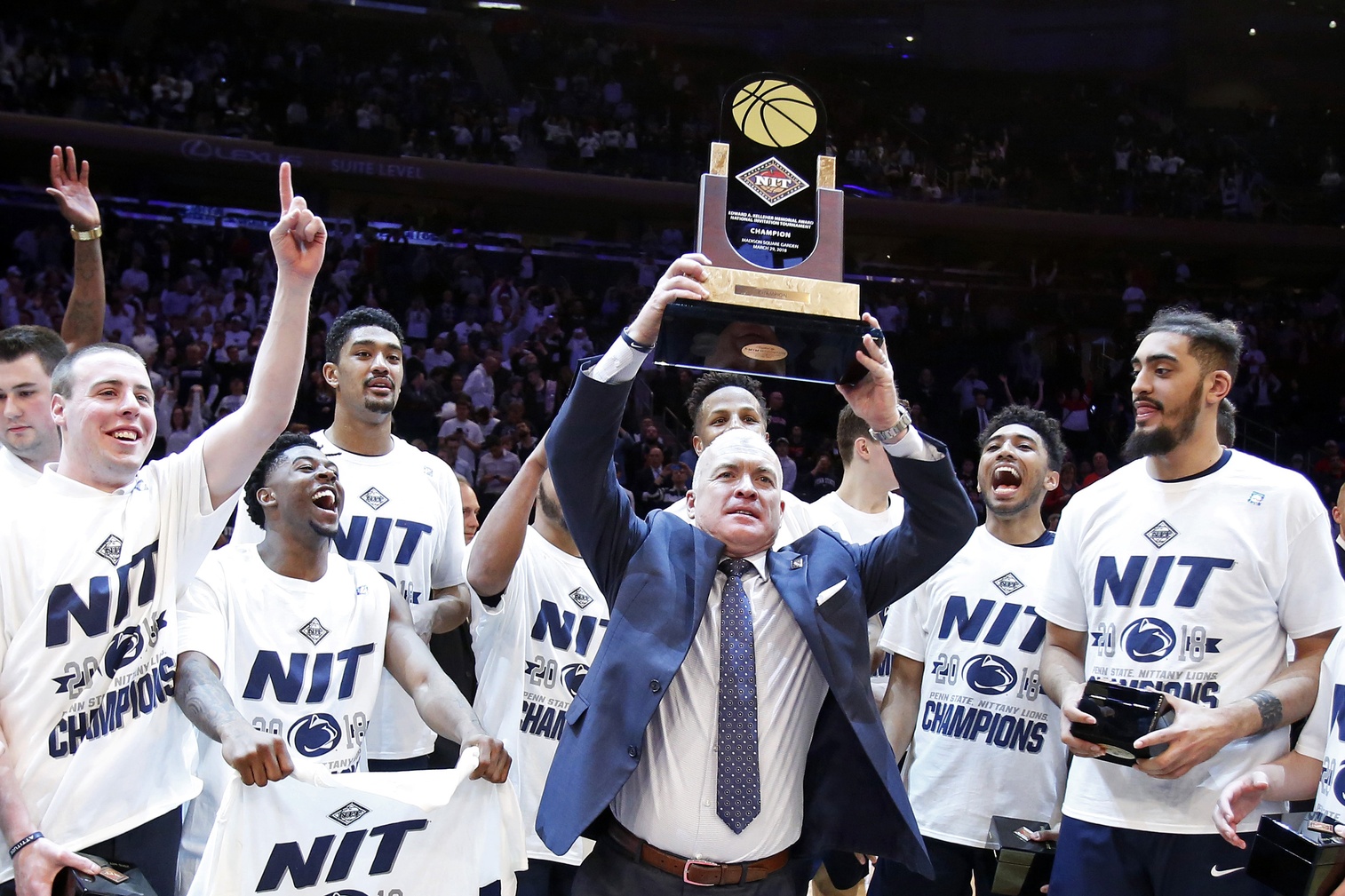 Congratulations are in order for the Penn State men’s basketball program. The Nittany Lions climbed their way to the top of the NIT on Thursday night, topping Utah of the Pac-12 to win the second NIT title in program history with an 82-66 victory in Madison Square Garden in New York.

Penn State held a 39-34 lead on the Utes at halftime but created some breathing room in the third quarter with a 24-14 margin after halftime. That helped put Penn State on a great spot entering the fourth quarter and allowed the Nittany Lions to stay ahead of Utah the rest of the way and end the season celebrating a championship.

Penn State may have been left out of the NCAA Tournament, but head coach Pat Chambers finally has something he can help build the program on after struggling year after year to reach this point. After leaving the Villanova coaching staff to become the head coach in State College, Chambers has had a good amount of work to do. Before this season, Penn State had just one winning season under Chambers; the Nittany Lions went 18-16 in the 2014-15 season without any postseason tournament invite. That just so happened to be Shep Garner and Julian Moore, each just ending their careers at Penn State having laid the foundation for Chambers’ grand plan to build the Penn State program by celebrating an NIT title. Chambers’ plan to tap the Philadelphia region for talent paid off and the hope is that continues to help build Penn State basketball into a program that can manage to have sustained success rather than go through a cycle of one good year ending with a deep NIT run or early-round NCAA Tournament exit every three or four years.

Congrats to @Coach_Chambers and his @PennStateMBB staff – we are proud of you for the NIT Championship !!

Because I don’t follow Penn State basketball as closely as others around the Penn State blogosphere do, I cannot form strong and informed opinions on why Penn State basketball has failed to find that level of sustained success over the years. I have come to a few opinions over the years though. First, Penn State has always been a football school first and men’s basketball has been left to live in the shadows of the football program. Second, it is difficult to recruit basketball talent to the middle of the state, especially when the competition for talent is pretty heavy just in the state of Pennsylvania. And trying to recruit players to come play in the Bryce Jordan Center is not exactly the best selling point to rely on. That said, Penn State has always had the resources to be able to elevate the basketball program, but it always comes down to the head coach.

Maybe this is the turning point for Chambers and Penn State. Maybe this can be the season that allows Chambers to generate and carry over some momentum to avoid going through another cycle of rebuilding and making a run back to the NIT in another couple of years.

During the broadcast of the NIT championship game, the trend of NIT finalists advancing to the NCAA Tournament was discussed, for any Penn State fans thinking about the program getting to the big dance next year. Since 2007, five NIT champions have gone on to play in the NCAA Tournament the following season; West Virginia (NIT champion in 2007), Ohio State (2008), Wichita State (2011), Baylor (2013) and TCU (2017). Penn State did not play in a postseason tournament a year after winning the NIT in 2009, for what it is worth. With just five NIT champs reaching the tournament the following season over the past decade, it still seems to be hit or miss instead of a reliable trend, but there are often many factors that go into why a team does or doesn’t get to the tournament the next season. It could be a team coming together and continuing to grow together the next year to take the next step or it could be a team with some significant roster turnover or perhaps a coaching change that holds them back the next season.

The recent results over the past decade are a far cry from where things used to stand. From 1989 through 2002, all but two NIT champions reached the NCAA Tournament the following season (Nebraska in 1996 and Cal in 1999 being the lone exceptions). Of course, it helped that the NCAA Tournament field was expanded in 1985, allowing for that trend to more easily be achieved. But then again, there are 68 teams in the tournament today.

The bar has been raised for Penn State basketball, no matter how you look at it, and this is a good thing. Personally, I believe there is far more value in making a deep run in the NIT (or in this case winning the NIT), than there is going one-and done in the NCAA Tournament. Time will tell just how much this NIT championship helps Penn State basketball get back to the big dance for the first time since Ed DeChellis was the head coach in 2011. I tend to think it can do nothing but help Chambers continue to improve Penn State.