No Suter, No Problem as Wild Shut Down the Oilers 3-0 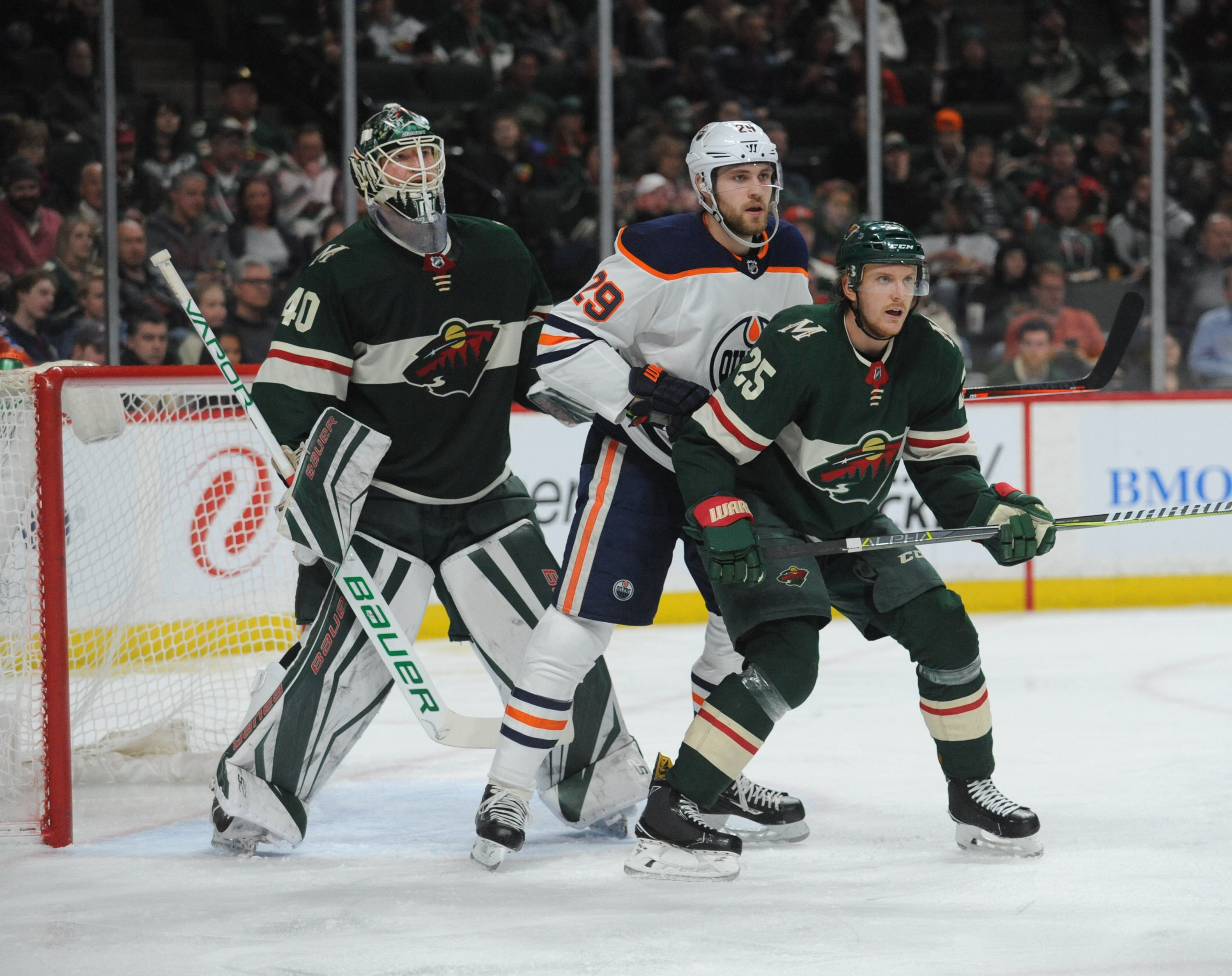 No Suter, No Problem as Wild Shut Down the Oilers 3-0

There is a saying in sports, its not how you start but how you finish.  You can start out on fire and then if you stumble and fall few will remember that start; the same is true if you struggle at first but if you finish with a championship few will dwell on how it all began.  The Minnesota Wild had an ugly start to the season, but so far (knock on wood) they seem to be finishing the season fairly strong.

Meanwhile, Edmonton is back in its strange place as a club with great potential but finding ways to disappoint.  Edmonton has embraced the role of spoiler and the last time the two clubs played they defeated the Wild 4-1 on Hockey Night in Canada. Can Minnesota punch their ticket to the post season in their last regular season game at home with a win against the Oilers?

1st Period Thoughts:  The game had good pace to start with both teams moving their feet well.  Adam Larsson would take a pass into his skates and then struggle to find before it was swept away by an alert Zach Parise who turned on the jets for a breakaway where he beat Cam Talbot with a wicked wrist shot 5-hole.  1-0 Wild.  Minnesota would dodge a bullet defensive a few minutes later as an ill-advised pass turned into a quick turnover for Mike Cammalleri who moved in a 2-on-1 with Anton Slepyshev and Cammalleri got Devan Dubnyk to commit and sprawl to the ice where Strome fed the puck over to Slepyshev who pushed the shot wide of the empty net.  It was a fortunate miss and Minnesota kept its composure and they would counter attack as Carson Soucy who was nearly burnt on that Slepyshev miss would work a puck out of the Wild end to go on the attack.  The line of Mikko Koivu, Mikael Granlund and Parise was by far Minnesota’s most dangerous to start the game.  Parise would get a step on Larsson and he’d feed a pass to Granlund who then fed Koivu for a quick shot that Talbot denied and then he had to stop Granlund from in close.  Soucy would draw a tripping call on Slepyshev.  On the power play the Wild flirted with disaster early as an ill-advised pass turned into a solo rush for Ryan Strome who motored his way into the Minnesota zone but a decent recovery by Jonas Brodin would force him to take a long wrist shot that was steered aside by Dubnyk.  Minnesota would regroup and Brodin nearly cashed in on a point shot that deflected off an Oilers’ skater and go on goal that was stopped by the Talbot’s toe save.  At times it seemed like the officials had swallowed their whistle towards the latter half of the period as Matt Cullen was held up as he tried to work a puck down beneath the Oilers’ goal line and as he worked his way out front Tyler Ennis was also held so he was unable to receive Cullen’s pass.  The Wild would come up empty on the power play but they had one great scoring chance late in the period as Parise again raced into the offensive zone and he found a trailing Brodin who fed a pass to Granlund who got Talbot to commit but he couldn’t tuck in the sharp angle shot.  Minnesota had to feel pretty good with how well they attacked offensively, but they also gave up some dangerous opportunities and were fortunate to be holding a lead going into the intermission.

2nd Period Thoughts:  The first half of the 2nd period was a bit contentious as the Wild seemed to be playing with fire with foolish turnovers.  The main source of these poor choices was Matt Dumba.  Dumba repeatedly made high-risk, low-reward plays against the Connor McDavid and Leon Draisaitl line that turned into opportunities for the Oilers.  At one point, Dumba tried to dangle around McDavid who promptly stripped him up the puck and set up Draisaitl for a quick shot that was fought off by Dubnyk.  It seemed as though the Oilers were closing in on tying the game.  Minnesota would wake up a bit and they’d find the back of the net as Brodin stepped up to join the rush and redirect a Koivu pass on goal and Talbot kicked out the rebound to Parise for a tap in goal.  2-0 Wild.  Minnesota appeared to tighten up their game defensively and denying the Oilers from having much in the way of time and space.  Minnesota would earn its first penalty of the game as Eric Staal was caught for pulling down Draisaitl.  The Wild penalty kill did a decent job of pressuring the Oilers’ point men and they were able to force a few turnovers and Edmonton got little to nothing going with the man advantage.  Minnesota carried its two-goal lead into the 2nd intermission.

3rd Period Thoughts:  The Wild really cranked up their puck pressure and Minnesota played like a team with confidence and a desire to take the 2 points that were almost in its grasp.  Minnesota did not sit back and invite the Oilers to mount a rally, but instead spent most of the period on the attack and swarming in the Edmonton zone.  McDavid’s line had to chase the Wild around his own end instead of being able to will his team back into the game.  Minnesota nearly added to its lead on a bunch of occasions as Charlie Coyle, Marcus Foligno and others had some real good scoring chances that just didn’t manage to go in.  The Oilers would press hard in the final five minutes, but Minnesota was not giving Edmonton much space to work with and they’d seal the game with an empty netter from Joel Eriksson Ek to earn a 3-0 victory.

Devan Dubnyk was probably more lucky than good as he had 22 saves in the shutout.  The Oilers will certainly be thinking about some of their missed shots from the 1st period, but overall the Wild had a good effort defensively.  When they managed to be more careful with the puck they did a fine job of shutting down and limiting the chances of the Oilers’ top players.  It was certainly fortunate for the Wild to have last change so they could match up against the Oilers defensively.

Offensively, the Wild owe Zach Parise a steak dinner.  Minnesota did generate some quality scoring opportunities but they couldn’t quite finish.  Parise bailed them out with the goals tonight.  Nino Niederreiter has to give the Wild more and he seems a bit lost right now.  The Koivu-Parise-Granlund line was clearly Minnesota’s best and they’ll need more than one line if they want to beat better clubs like the ones they’ll face on the California-road trip.

This was an important win that really gives the Wild some nice cushion against that secondary pack of clubs that are chasing them.  I thought Soucy looked pretty comfortable out there; it will be interesting to see how well Minnesota’s reconstituted blueline does against better competition.  If they can limit their mistakes I think we could do ok and I thought Jonas Brodin had a superb game.  They’ll need that if they want to reach a 100pts this season.

~ Carson Soucy wore #60 for the Wild joining Jose Theodore in having worn the number.

If you heard the sound of someone gagging it might be a member of the Iowa Wild as the team has gone from sitting comfortably in the playoff picture and sitting in 3rd place in the division and sitting on the outside Western Conference window looking in in 6th place with not many games left.  What’s to blame?  Flagging special teams play which was a team’s strength during the 1st half the season and sub-par goaltendng on nights the offense is working derailing early game leads.  Iowa has had some injuries, but most of its major scorers and defensive players have remained healthy but for whatever reason they’ve imploded.  Another big part of this are points left on the table as they’ve let 3rd period leads slip away and then they were unable to finish in overtime or the shootout.  Either way, it looks like another season of disappointment in Des Moines.

D – Braydyn Chizen (Kelowna, WHL) ~ Kelowna is used to making long playoff runs, but not this season as they were swept by the buzz saw that was the Tri City Americans and Chizen had 2 shots on goal in their 5-3 series clinching loss on Thursday.  The 6’6″ defenseman had no points in the playoffs and was a -3 in 4 games.  He had 6 goals, 19 points, 74 PIM’s and was a -15 in 61 regular season games.

RW – Dmitry Sokolov (Barrie, OHL) ~ the Colts had their backs to the wall on Thursday but they managed to earn a 5-4 overtime win as Sokolov chipped in two helpers in the victory.  The Colts’ followed it up with a 5-2 win on Saturday against the Steelheads to take a 3-2 series lead and the skilled sniper had another goal (5 shots on goal).  The Omsk, Russia-native has 3 goals, 8 points and is a +2 in 5 playoff games.