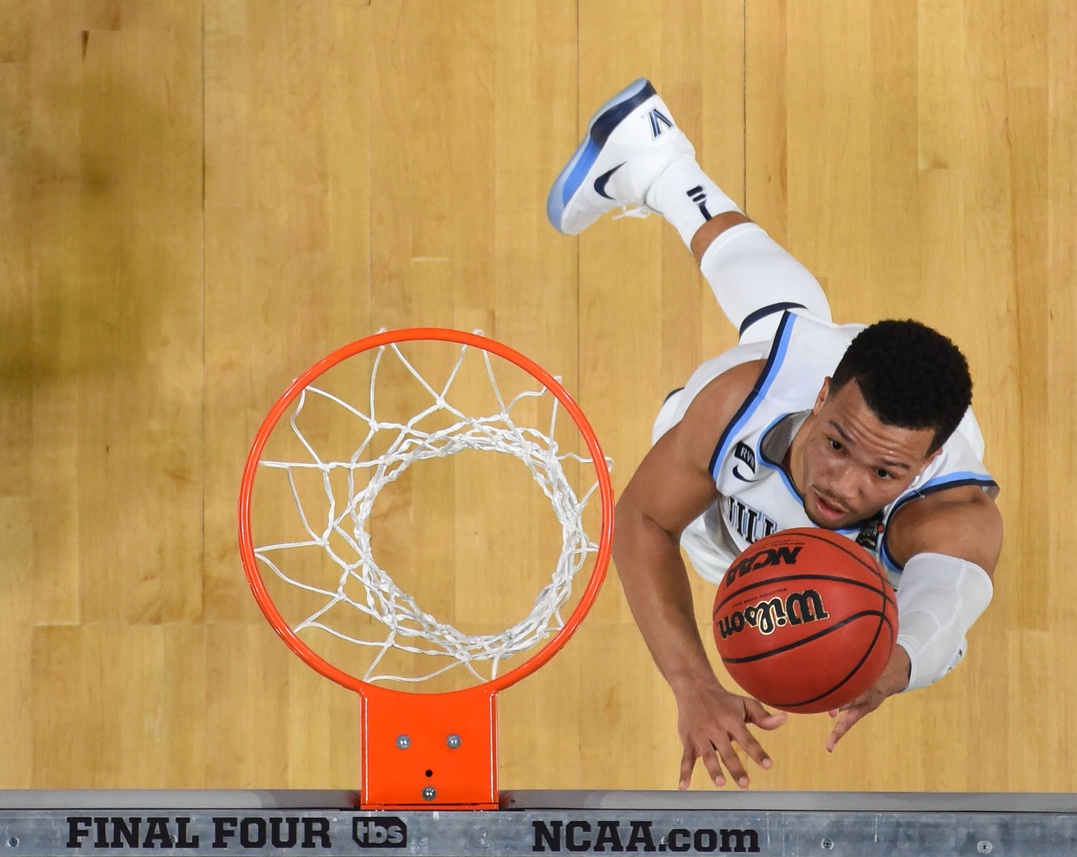 The son of former NBA role player Rick Brunson, Jalen’s game is easy on the eyes, but tough on opposing defenses. A knock-down shooter and polished passer with the savvy of a chess champ, the Naismith Player of the Year has a good chance to carve out a career even longer than his father’s (nine seasons).

Despite a historic collegiate career, Brunson won’t be a lottery pick. Nevertheless, there are shades of fellow lefty phenom D’Angelo Russell in his game. In Brooklyn, Russell is proving capable in both on and off-ball situations alongside Caris LeVert, Rondae Hollis-Jefferson, Spencer Dinwiddie and company. While both Russell and Brunson trend towards being score-first guards, neither is an incapable or unwilling distributor.

Jalen isn’t as quick or tall as D’Angelo (6-5). Russell, who turns 23 next February, isn’t much older than Brunson, and almost certainly possesses more  upside. Still, the slower but stockier Brunson seems slightly steadier with the ball — and boasts better defensive awareness.

Combine that with Brunson’s old-school post game, no-nonsense approach, and slow-motion stop-and start moves, and we arrive at yet another optimistic comparison: Andre Miller. The Professor didn’t put many people on posters during his Hall-of-Fame worthy career, he wasn’t a three-point shooter, and he wasn’t ever the fastest player on the court. He was known for his toughness, intelligence, unselfishness and mid-range mastery. Miller was definitely more of a pass-first point guard. That didn’t mean he couldn’t score. The video below only does so much justice to the Andre Miller post game. Will Brunson be able to maintain his strength advantage at the next level?

Russell has dealt with obstacles and continues to experience growing pains. He is still very much a work in progress, much like the Nets team he plays for. Miller was a fascinating player to watch, making the mundane look marvelous, the point guard version of Tim Duncan, at least offensively. Brunson seems to possess a similarly robotic, mathematical and methodical, yet free-flowing and instinctual style of play. Cat-and-mouse if you will.

Blending some of the strengths of Andre Miller and D’Angelo Russell creates an intriguing skill set, especially if the expectations (backup point guard) are tempered (which they likely will be). Brunson is unlikely to enjoy the same individual success (per-game stats) as Miller, and probably does not possess the All-Star potential still evident in Russell. However, whoever does end up taking Brunson on draft day knows (almost) exactly what they’re getting. Defensively, he projects as a one-position defender (covering point guards), or someone who will need to be hidden on a wing that doesn’t create much off the dribble or score well against smaller players in the post.

As far as late first-round fits, the Los Angeles Lakers (currently No. 25 overall) might make sense if they want to reunite Brunson with Josh Hart. They could definitely use a long-term backup behind Lonzo Ball. The San Antonio Spurs could have interest in the early 20’s. Tankathon.com currently has Brunson going to the Indiana Pacers at No. 23 overall. Personally, I’ll be surprised if we see him drop to the Rockets and Nuggets (44, 45 overall). There are plenty of teams that don’t necessarily need another point guard, but Brunson’s ability to thrive both on and off the ball on offense should mitigate some of those positional concerns on offense.