Recap: Shorthanded Celtics smacked around in paint vs. Bucks 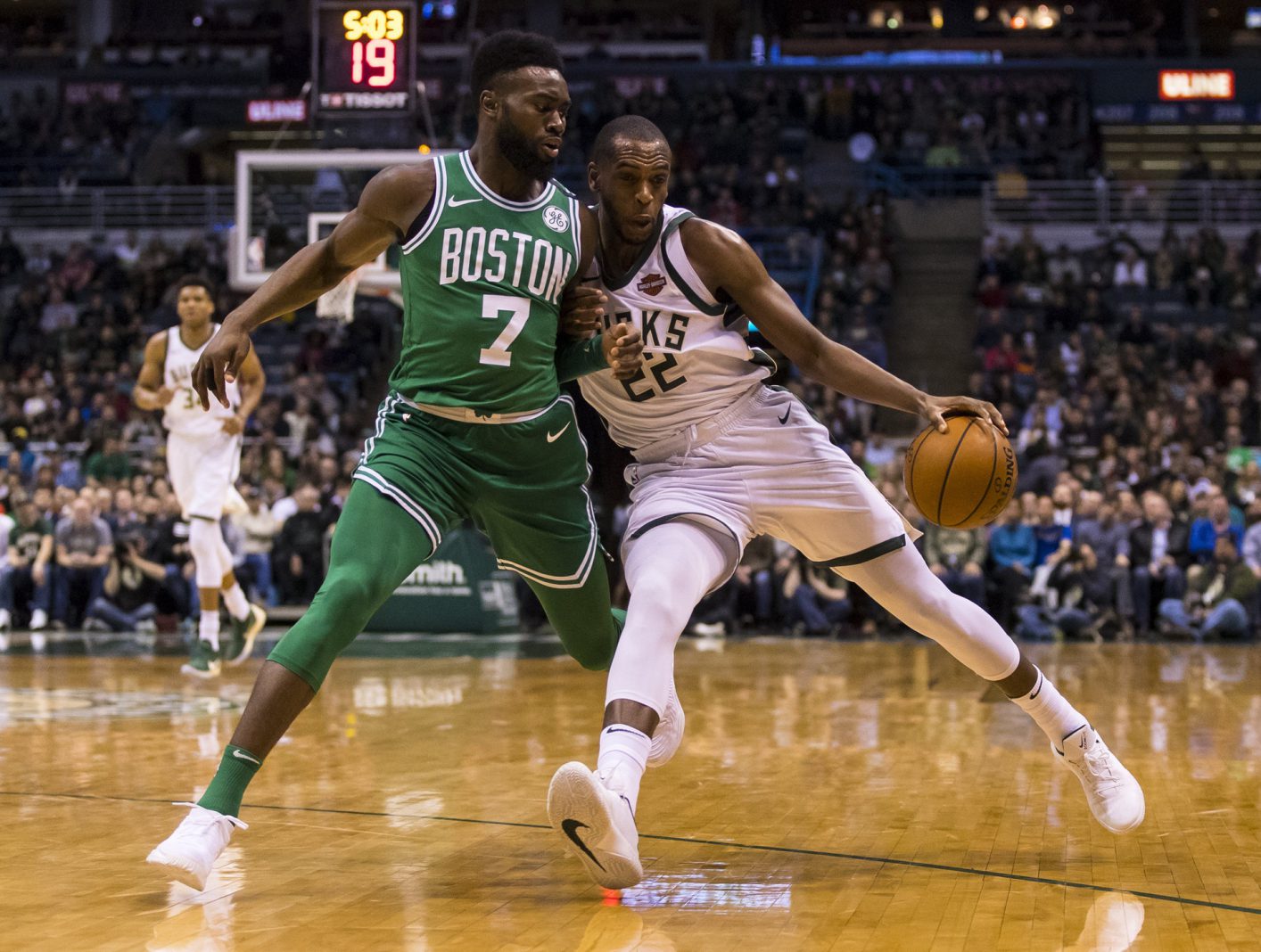 Recap: Shorthanded Celtics smacked around in paint vs. Bucks

So the Boston Celtics faced the Milwaukee Bucks for the fourth and final time this year with Kadeem Allen at the other guard position alongside Jaylen Brown. Why? Well, my friends, it’s because the tail end of this season has been willed by the basketball gods to manifest itself as an endless series of gauntlets Brad Stevens must run through, with Terry Rozier and  Shane Larkin adding their names to the injury report.

And…well, sometimes genius coaching ain’t enough. Not when the wound-depleted squad’s defense falters, yielding metric tons of short-range points by the opposition, and the offense isn’t strong at all. It was an entertaining contest, but the Bucks ultimately triumphed, 106-102.

I’m not entirely sure how the Celtics managed to smack the Bucks right in the mouth during the opening half of the first quarter. Yet smack them they did. Jayson Tatum starting aggressive is one reason, of course, not to mention the virtues of the well-oiled machine that the Cs have become even when lacking some players, but it seemed initially brutal.

This analysis was premature. Milwaukee started getting their punches in around when the 6:00 mark passed. Khris Middleton has spent the last few weeks shooting the damn leather off the ball, so it’s hardly surprising he got his 10 points for the quarter in a three-minute span. Point guard Eric Bledsoe also put in plenty of solid work as the best facilitator the Bucks have had in years. And then, y’know, there’s the whole, like, “Giannis Antetokounmpo is on their team” thing, right, which is a pretty great resource, IMO.

Good competition is the best thing about NBA basketball, so it’s not like one expected or wanted this game to be a cakewalk. But it was still jarring, especially with Old Ass Jason Terry going unguarded in the corner and making the sort of threes he can make in his sleep. Boston prevented the Milwaukee run from getting out of hand and ended the quarter with a lead, 31-26.

Quarter #2 proceeded as a frame of runs, as the Bucks leaned on Giannis and Middleton (an intriguing variation on Quixote/Panza, to be sure) and the Celtics looked to Horford, Tatum and Brown. Milwaukee seemed more comfortable finding its way around Boston’s defenses than vice versa after a few rough minutes, though, and this allowed the former’s runs to ultimately be more devastating. One particular Bucks surge of 14-2 took the Celtics lead and slapped it until it was wearing cream-and-spruce Bucks colors.

It wasn’t until the final three minutes of the first half that Boston resumed their position as the game’s primary aggressors. Tatum remained the primary weapon of Boston’s offense, with strong support from Brown and Greg Monroe as scorers and Horford often playing point guard. (He’s kind of really good at that, TBH.) Milwaukee’s defense has been weak and predictable all year, but our heroes would need tough D of their own—a casual blitzkrieg like Giannis can win games from force of solitary will, unless well repelled—to win the game and the season series. Surging just before the halftime bell on the parts of Moose and Tatum (the latter hitting a long stepback trey at the last second) narrowed the margin considerably, but the Bucks still led 58-56.

Depth and Brad Stevens’ use of that depth have been the primary Celtics weapons since the baby-faced Hoosier took the keys from Doc Rivers. And that would be the deciding factor in the Cs favor if they could get themselves together despite the mistakes made in the first half. Aside from the aforementioned Jason Terry and Jabari Parker (who functions as sixth man while still recouping from his ACL tear), the Bucks bench is virtually a non-factor. We stole their best bench player, remember? As for rookies and youngsters, Kadeem Allen had perfectly competent minutes for Boston and so did Semi Ojeleye, while Milwaukee’s enigmatic Thon Maker didn’t see the floor and Malcolm Brogdon was out with injury.

Yet even as Jaylen overtook Jayson in scoring and Aron Baynes made his way into double figures against the weak Bucks center rotation (sorry, Tyler Zeller), defense remained problematic for the Celtics. (As a fan of a team with an unconventional center rotation, I’m qualified to judge.) Within the post and painted area, the Bucks were essentially unstoppable in the first half and weren’t much worse in the second, while Middleton provided all the perimeter scoring they needed. Most of the game’s third quarter was back-and-forth lead trading, but Milwaukee worked themselves into another feverish run powered by Parker and…John Henson, because the world wasn’t weird enough today, I guess. It was starting to look ugly—like, “maybe the Bucks pull ahead by double digits” type ugly—but last-minute work from Tatum and MOΘSE kept the Celtics within eight, 79-71 with three quarters in the books.

All things considered, the Cs did a passable job slowing Giannis down; he has the LeBron James-esque intangible feeling to me, like he can only be slowed or contained, never truly handicapped. It was Middleton, Parker and Bledsoe being able to separate their performances from Giannis that kept the Bucks ahead for the first half of the fourth quarter. Antetokounmpo also showed off his underrated passing on a few sweet lobs for further demoralization.

There were a few chances for the Celtics to tie or regain a lead—which they hadn’t held since midway through the third quarter—during the stretch between the 7:00 and 3:00 marks, but the fierceness wasn’t where you thought it’d be. (Marcus Morris reverting to full chuckin’ mode didn’t help matters offensively, not one bit.) Only during the game’s final three minutes did this team look like the one that’s frustrated the entire league all season.

It wasn’t enough. Despite a thrilling final 60 seconds in which Milwaukee attempted to blast their own feet off with double-aught buck (an out-of-bounds turnover, a missed free throw, not defending a brutal Tatum dunk), Boston did the exact same thing: Jaylen couldn’t avoid Giannis’s blocking hands on a layup, Tatum stepped out of bounds himself when about to shoot a vital trey, Morris blew another shot and so on. After some pro forma playing of the foul game, Milwaukee handed the Cs their first loss in six games.

HOT ISH: Tatum and Jaylen had great games, and the final stretch of this game showed how strong the Celtics ultimately are—it just didn’t overcome the screw-ups from earlier.

NOT ISH: About 64 percent of the Bucks’ points came in the paint, and considering the Cs are no longer the rebound-challenged entity they once were, this is inexcusable. Seventeen turnovers and the horror of a bad Mook Morris shooting night made for a complete trifecta of s**t.