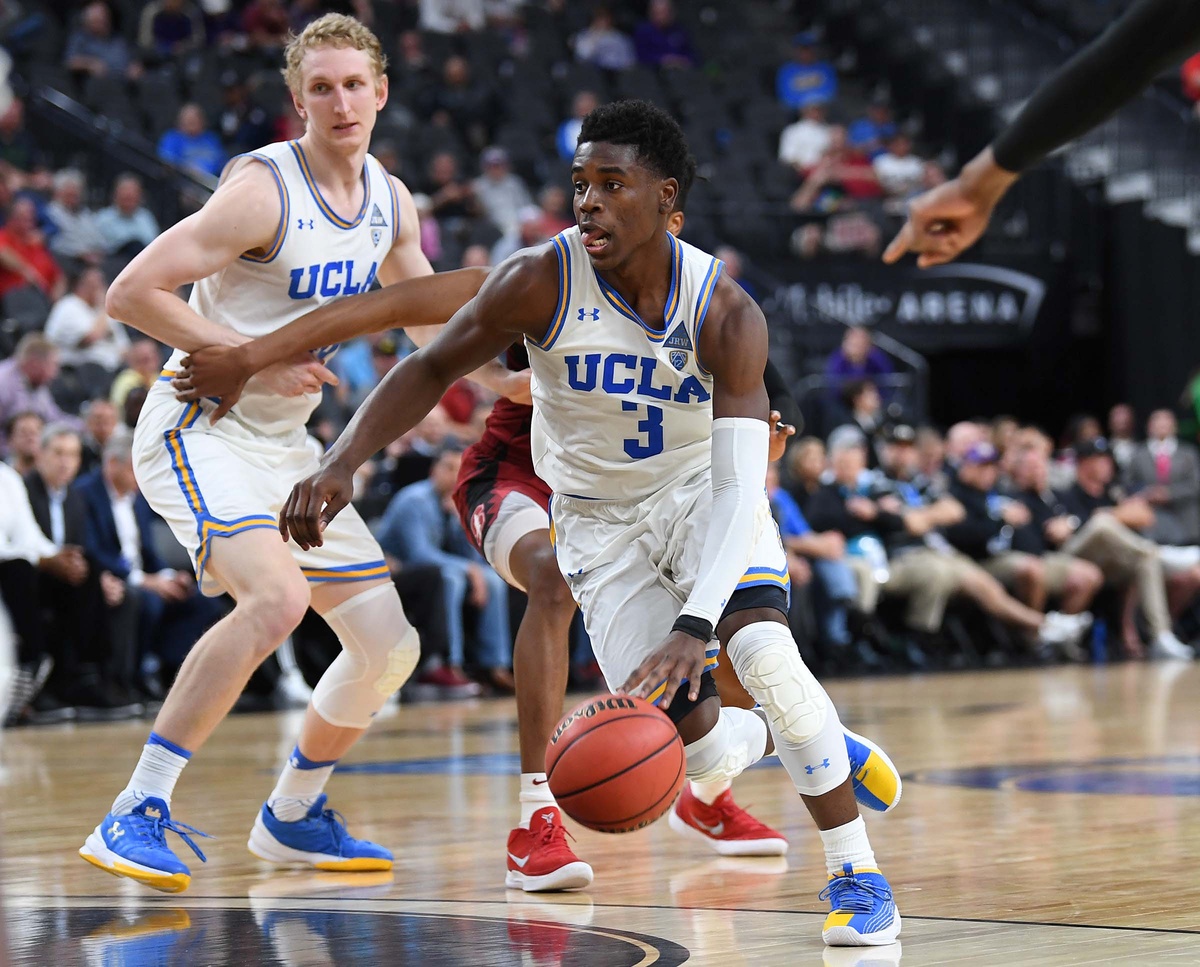 The younger brother of Justin and Jrue Holiday, Aaron made a name for himself at the same school Jrue jetted after just one season. He follows in a long line of point guard prospects hailing from the great state of California and possesses some of the same tools as Jrue (surprise, surprise). While Justin (6-6, 7-0 wingspan) was the most blessed brother in the size department and Jrue (6-4, 6-7 wingspan) also owns a solid height advantage over Aaron (6-1, 6-6 wingspan), younger bro has the wingspan and defensive ability to survive and thrive at the next level.

Both of the younger Holiday brothers possess plenty of ball-handling and playmaking skills. Aaron essentially projects as a smaller version of Jrue. As such, he almost certainly won’t have the same defensive impact at the next level, though that’s not saying much since Jrue should be in the running for First-Team All Defense. In other words, this is not a slight. Aaron could actually prove capable of covering both guard positions. He has good instincts on defense and excellent hands. He’s not afraid to swipe for the ball or go up for a block, and he has a head-of-the-snake mentality. He will pick you up at half court and try to disrupt the point of attack.

As I touched on in an article last winter, it’s not hard to tell that Aaron is the youngest of three brothers. He’s feisty and ferocious on both ends and a fun, free-flowing offensive player who can do a little bit of everything. Holiday is undaunted when it comes to attacking the paint, constantly seeking contact. The way in which Aaron differs from Jrue the most is demeanor. Aaron will talk that trash and back it up. They’re both gritty guards, but Jrue is generally quieter than a local library while Aaron appears to enjoy jawing. Maybe that’s just what happens when you grow up with older siblings beating you up every day on the basketball court. Whatever the case, the fire burns bright in this one. The area in which Aaron is perhaps most similar to Jrue is his ability to finish with his left hand around the cup. Jrue is very arguably the league’s best left-handed finisher among right-handed point guards.

Like Jrue, Aaron is a point guard who has spent plenty of time away from the ball. Both are and will continue to be more complete players because of it. Last year’s Bruins, which reached the Sweet Sixteen, brought Aaron off the bench. However, they regularly ran multi-guard lineups featuring some combination of Lonzo Ball, Bryce Alford, Isaac Hamilton and Holiday. Jrue has maintained a solid assist-to-turover ratio during his career, though he’s sometimes loose with his handle and prone to the occasional brain fart. Those who handle the ball will make mistakes, but Aaron’s most troubling concern at the next level is definitely in that department. Aaron got off to a great start in the first-round tournament matchup against Saint Bonaventure, scoring from deep and threading the needle on several assists before ultimately losing his touch from the field and committing too many turnovers to keep track of. He walked off the court frustrated, fouling out after a couple late offensive fouls where he needlessly used his off hand to displace defenders.

I think the consensus is that Jalen Brunson will be selected over Holiday in this summer’s draft. I’m a Brunson believer, but there’s also a part of me that wonders whether Aaron’s two-way talents make him a better bet to break out in the NBA. At the very least, both project as quality backup point guards.

Ty Lawson is another interesting comparison. While Lawson (5-11, 195 lbs.) was too small to make much of a difference on defense and flamed out faster than expected at the next level partially due to off-court issues, he was a pest with a serious knack for stealing the rock and going the other way with it.

Both were accomplished three-year college player who could drive and dish, absolute blurs in the open court. Like Lawson, Holiday is also a master at maneuvering through the tight crevices of interior defenses. The reasons Aaron can be as good if not better than Ty revolve around his superior outside shooting, defensive length and offensive malleability. He projects as a much more capable switcher on defense. Lawson didn’t fit next to James Harden. He needed the ball to be effective. Holiday doesn’t. He showed it last year when he shared playmaking responsibilities with Ball. Coincidentally, Lawson was selected immediately after Jrue in the 2009 NBA Draft (18th overall). Aaron’s relatively short stature will make his climb to the top a difficult one. Nevertheless, Justin had to grind for a long time to solidify his status as an NBA wing. Aaron is a hungry hooper as well, a Holiday through and through. At the end of the day, it’s about the size of the fight in the dog, not the size of the dog in the fight. And this one has a huge heart.

New Orleans selected Duke guard Frank Jackson in the second round last year. Injuries have kept him sidelined. Regardless, pairing Jrue and Aaron is something I will gladly get behind. Tankathon.com is on board with this. A versatile, two-way point guard is a fit on most teams. It just depends what sticks out most in the minds of those making decisions. If it’s turnover troubles, Holiday will be a mid-to-late second-round pick. If it’s his tenacity and will to win, he could sneak into the late first round (or go early second).