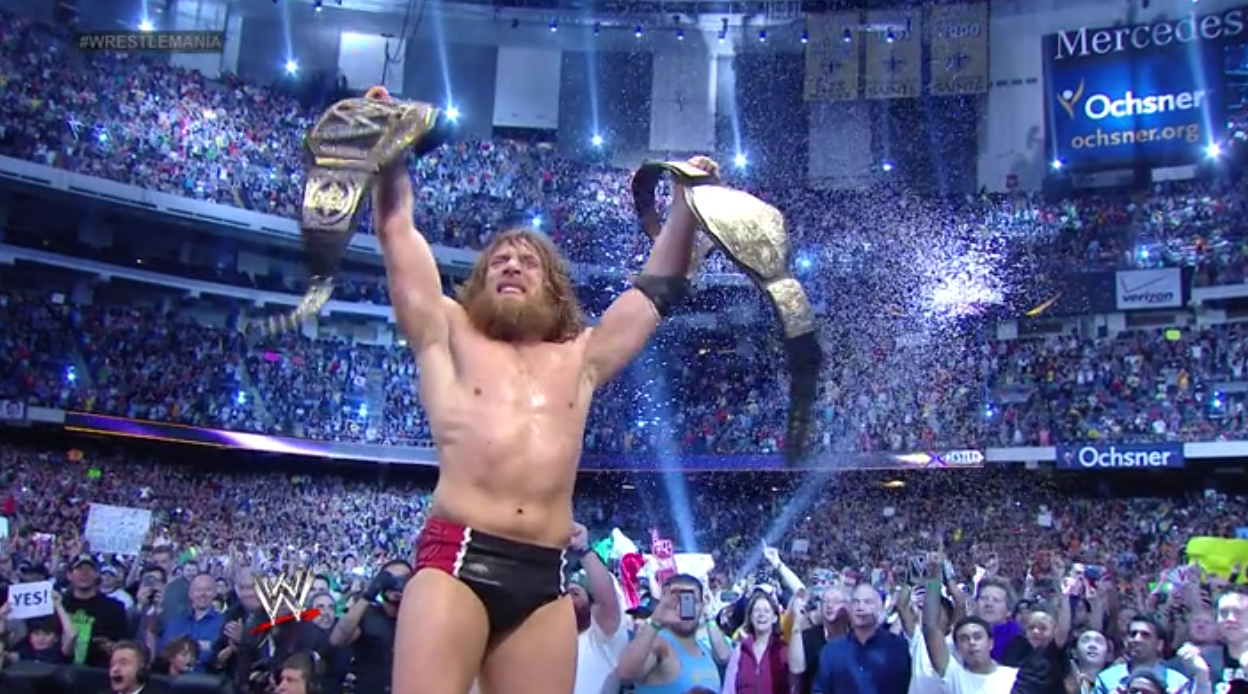 The Mega-Powers exploded a year after the two celebrated Savage’s WWF Championship tournament win. The two biggest names in the WWF in the 80s created a really intense back and forth match that really had you guessing who would win. At least at the time you would be guessing. Looking back, hard to think Hogan would lose.

These two had a lot to live up to in the rematch of their instant class a year before. It didn’t quite make it to that level, but the added intrigue from a possible Shawn Michaels retirement added to the excitement. It was odd to see a WrestleMania end on such a somber tone, but it worked.

“The Austin Era Has Begun!” Jim Ross at it again to help create the atmosphere surrounding this match. The build-up itself was memorable with Mike Tyson getting involved as the special guest enforcer. Above all, the fact that Michaels put on this match with a back that forced him out of the ring for over four years is just inspiring!

The two biggest stars of arguably the biggest era in the industry collided for the first time with the top prize on the line. The match kept everyone on the edge of their seats until Austin reclaimed his title. This would be the first in arguably the greatest trilogy in WrestleMania history.

Lesnar and Reigns had an uphill battle on their own. For weeks/months the WWE Universe had decided that Reigns should not be in the main

event at WretsleMania, and they had no problem explaining that during the match. The two did what they could to change minds, and I think they did…for the most part. Even with a huge effort from Reigns, the crowd was still against the fact the Reigns was “the guy” in WWE. They would need something more to get them excited…

With both Lesnar and Reigns on the mat, Seth Rollins made a full sprint to the ring, handed the Money in the Bank briefcase over to the ref and proceeded to successfully become the first Money in the Bank winner to cash in at WrestleMania. The crowd was in a state of shock and excitement as the show ended with Rollins waving his newly won WWE World Heavyweight Championship belt over his head.

(Any chance I can get to bring up Hogan calling it the SilverDome I am going to take!)

I have mentioned before about matches that had to deal with going on after phenomenal matches/moments. These three had to follow what many consider to be the most shocking moment in WrestleMania history when The Undertaker’s streak came to an end. The match was really good but the reason that the crowd stayed as with it as they did was the fact that their guy, Daniel Bryan, was finally getting his due! YES! YES! YES!

performers put on a match that fans still talk about as one of the best. This was the first time that two fan-favorites locked up in such a high profile match up. Some thought that it would create a negative split in the crowd. Well it created a split, but that split just helped egg each side on to outdo to other side.

Most say that the success of the WWF was based on the first WrestleMania – I say it was due to this match. The first WrestleMania planted the seed and Hogan/Andre was the blooming flower. An indoor attendance record of 93,173 people was set which was just unheard of for that time! They all came to see that match.

Hour long matches were really a thing of the south. You hear more about NWA title matches that went an hour, but not in the WWF. Pat Patterson came up with the idea of putting Bret and Shawn in an hour long match and was flat out told it would never happen – especially at WrestleMania. “It would be impossible to keep the crowd’s attention for that long” was the reason given.

Something changed Vince’s mind and, in my humble opinion, I think it worked out pretty well. Not only did this turn out to be one of the most talked about matches in WrestleMania history, but it is so without a fall until an impromptu overtime period. Hard to think of two other stars in that era that could have pulled that off.

Many consider this to be the best WrestleMania in the event’s 32 year history so it would need to top notch main event. Add together two of the biggest stars of the company’s history (both as fan favorites), the action starting before the bell rang, 68,000+ people going crazy, a very underrated commentary team of Jim Ross and Paul Heyman on the call and the unlikeliest of unlikely association of Stone Cold and Mr. McMahon and you have pure entertainment in your hands.

So there you have it! What do you think of the list? Should a match be higher? Lower? Where do you think this year’s main event will fall (whatever match it may be)? Follow the From The Top Rope page on Facebook and let us know!