Your Morning Dump... Where the Raptors got right up in the Celtics' space 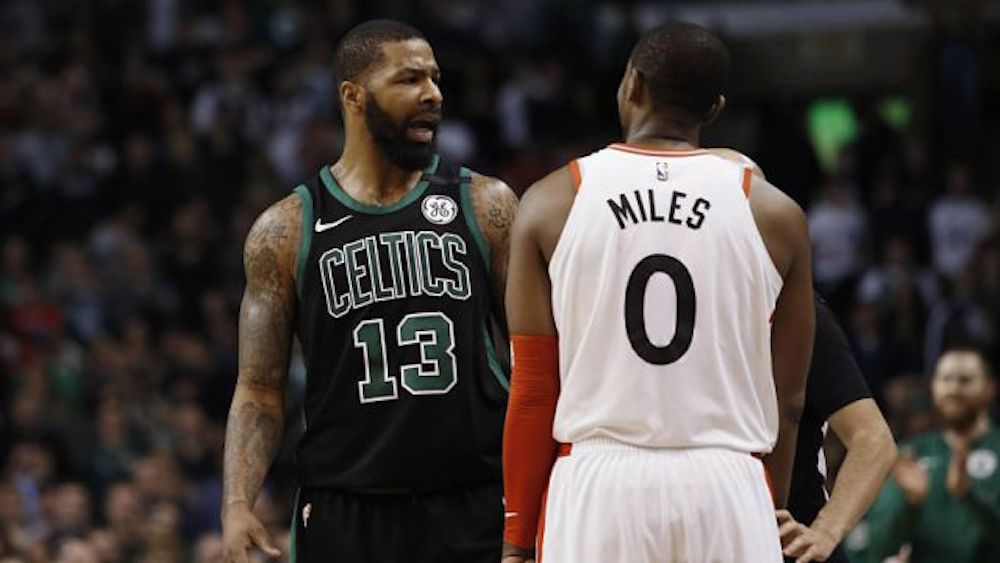 Your Morning Dump... Where the Raptors got right up in the Celtics' space

The Celtics were hoping that the return of Terry Rozier, who missed his first game of the season Tuesday in Milwaukee because of an ankle injury, would stabilize the point guard position after the team was forced to start G League two-way player Kadeem Allen there against the Bucks.

Instead, the Celtics routinely gave the ball away in live-ball situations. A Raptors team that scored a mere 14 first-quarter points on 6-of-23 shooting was more than happy to feast on easy transition points.

When the Celtics beat the Raptors on Saturday in Boston, their sixth straight victory in a stretch that improbably sustained their quest for the top seed, they turned the ball over just six times while yielding a mere two points off turnovers.

“You always talk on offense about owning your space, and they owned our space all night,” Celtics coach Brad Stevens said. “They were very physical. They were very good. I thought that we had unbelievable defensive mentality and the way we were playing was terrific on that end. It’s hard to keep playing that way when you’re not making baskets — or at least occasionally making one.

“The only reason we were down at halftime was the turnovers, even though we couldn’t score. I think, ultimately, that probably wore on us. And they did a great job. They’re really good, they’re really deep. Hats off.”

I hate when we lose to Toronto, because my wife is from Toronto and for 48-minutes she transforms from someone who asks “we have a guy on our team named ‘awg’ (OG)?” To the world’s biggest Raps fan this side of Aubrey Graham. We were both watching and as the second quarter began and with Terry Rozier out of the game, Dwane Casey dialed up some three quarter court pressure on the Celtics MASH unit of ball handlers. I turned to my wife and said “we’re in trouble now, but as a caveat, this would not be happening if we had one of our three sidelined point guards playing tonight.”

The pressure that Toronto put on Kadeem Allen, Marcus Morris, Jayson Tatum and whoever else was taking the ball up on occasion took the Cs right out of any remaining offense rhythm. It doesn’t explain all of the missed 3s, but the Celtics were routinely starting their offense with 14-16 second left on the shot clock. Good coaching by Casey to recognize where the Cs would be deficient and adjusting his defense accordingly. Toronto really was up in the Celtics’ space all night.

“The only reason we were down at halftime was the turnovers, even though we couldn’t score.”

Sounds to me like someone who was really saying, “even with a patchwork lineup, we could have and should have been beating these guys.” The odds of us getting up to 7 games of Cs/Raps next month feel slim, as one of these two teams will need to dethrone Lebron James in order to greatly increase the odds of the match-up (the other team will have to take care of business, too). But even after last night’s beat-down, are you afraid of Toronto? My biggest takeaway from last night was that a healthy (Kyrie, Marcus and Shane back) Celtics team should beat the Raptors in the playoffs.

On Page 2, Terry couldn’t shake off the rust

Rozier, who returned to the lineup after missing Tuesday’s loss at Milwaukee due to a left ankle sprain injury, had just two points while missing all but one of his nine shot attempts.

The 6-foot-2 guard was quick to clarify that the left ankle sprain that sidelined him for the Bucks game, was not a factor in his struggles on Wednesday against the Raptors.

Rozier credits Toronto’s defense for playing a good game, but acknowledged there were some things the Celtics did that aided in the team’s overall struggles, too.

NBCSports — ‘No Pressure’ On Terry Rozier despite rough game

Terry Rozier has been spectacular this season, especially lately in filling in for Kyrie Irving, but his absence on Tuesday night, and his rough game last night show just how vital it will be for him to perform in round one.

With the two-seed now wrapped up, it’s probably time to give Rozier at least two of the last four games off — maybe play him in Washington in the penultimate regular season game to give him what might feel like playoff minutes in a playoff preview, but it’s time to put the most meaningful Cs in mothballs for parts of the next week and a half.

The Cs also have really missed Shane Larkin this week. It showed in the bevy of second quarter turnovers, and there were times last night when the Cs weren’t scoring (there were a lot of those times) where you couldn’t help but wonder what an infusion of Larkin’s energy, ball-handling and shot-making could have done to the Cs chances.