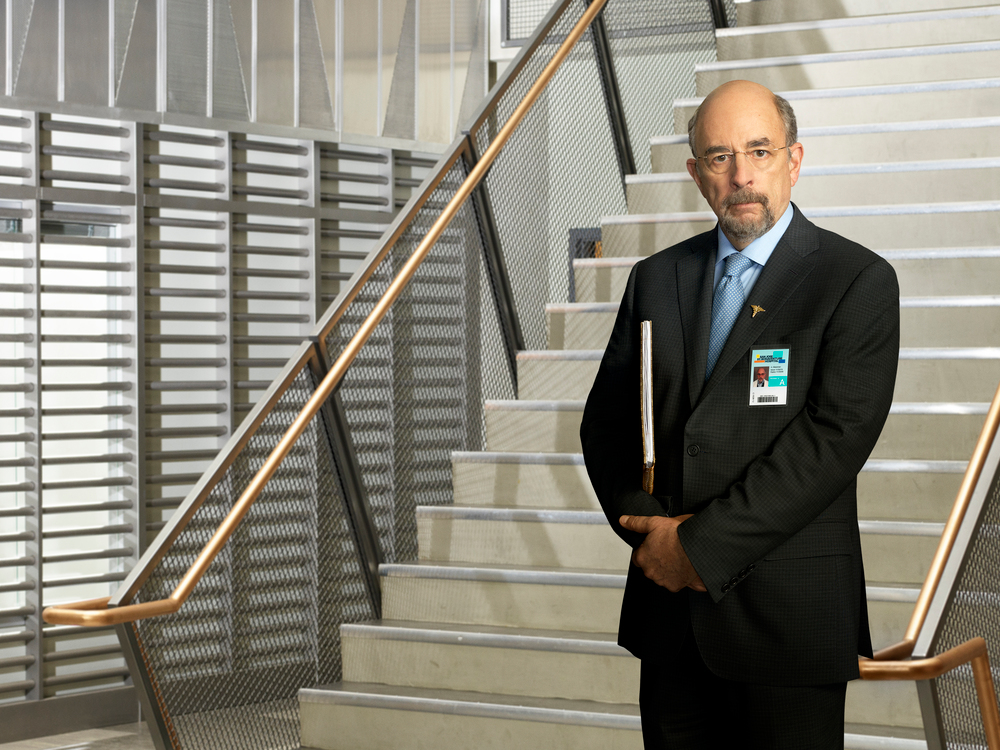 The NBA season is coming to a close and as the Knicks hobble to the finish line, it’s safe to say that Phil Jackson didn’t leave them in the best place. The moves he made (or didn’t make) left many fans (including Emmy winner and current The Good Doctor star Richard Schiff) scratching their heads.

“I was confused by what [Jackson] was doing. As a coach, he used negative psychology to get under the skin of his players and opponents,” Schiff told KnicksJournal.com. “I guess this was a classic case of someone believing in a theory that had just seen its time come and go. He just wouldn’t let go of it. He made emotional decisions, dumping guys like J.R. Smith, Iman Shumpert, and Tyson Chandler. We got nothing in return!”

While Jackson publicly devalued players like Carmelo Anthony, Schiff praised the new front office (spearheaded by Steve Mills and Scott Perry) for what they got back for the former star and what they’ve done beyond that.

“I liked the Carmelo Anthony trade. I was sorry to see Doug McDermott go. He reminded me of a poor man’s JJ Redick. Great shot and he moved well without the ball. He cut to the basket well,” he critiqued. “I’ve always liked Enes Kanter. He’s a workhorse who rebounds and scores at will down low.”

Anthony’s departure seemingly opened up a window of opportunity for Micheal Beasley to receive more playing time this season. Schiff has become a fan of the high-scoring forward along the way.

“He [could be] a premier offensive player. I’ve seen stretches where he’s been like Kevin Durant. He’s made strides on defense. He just gets into that zone where he’s unstoppable…but then he just disappears,” the actor explained. “Isn’t it on the coach to give him a kick in the ass or teach him mindfulness? Beasley has all the talent. If you look at Trey Burke, you can see what motivation looks like.”

These new acquisitions have given the Knicks a boost, but something simply isn’t clicking. As Schiff alluded to, that missing link could be a head coach who can motivate his players and command the troops better than Jeff Hornacek.

“Is the losing due to youth and inexperience, or is it a matter of the coach failing to get his message across? I don’t know,” he said. In analyzing the team’s offense, Schiff said that there is too much pick and roll, and not enough movement without the ball. By subtracting a player like McDermott, there’s less spacing and fluidity on the court.

Look out, Walt Frazier! Richard Schiff sounds as though he has the chops to handle some color commentary.

For now, Schiff has many other roles, including that of Dr. Aaron Glassman on ABC’s hit series The Good Doctor. (Spoiler alert) As the freshman season came to a close, Schiff’s character had been diagnosed with an operable glioma, requiring treatment.

Needless to say, Schiff’s character could face an uphill battle in season two.

“I know the studio wants me to come back, so I won’t be dead! This mortality thing is something [the show] wants to explore,” he shared. “It’s all about Shaun Murphy and how he is going to deal with the prospect of losing the one person who understands him and has been on his side.”

Murphy, the show’s main character, has autism. Being able to to play a part in the way his journey is portrayed has a special meaning for Schiff.

“My son is on the autism spectrum. I’ve had a fascinating journey with him. He’s my favorite human. He’s a remarkable person, my hero. I thought it would be interesting to explore that journey. Help give a voice to the subject,” the actor who won an Emmy for his work on The West Wing said. “People on the spectrum have difficulty getting on in the world. 90% are unemployed. It’s a condition we don’t fully understand yet, but people on the spectrum are very special, many [are] brilliant and sensitive to the world.”

Schiff says there have been favorable responses from people in the community and respective organizations. He receives music and poems from those with the condition, who view the show as motivation to make sure they too are seen and heard.

Schiff will make his way back to New York to shoot a movie in the coming months before The Good Doctor resumes. For more on his other roles (and his advice for Frank Ntilikina), check out part one of our interview with the passionate Knicks fan.