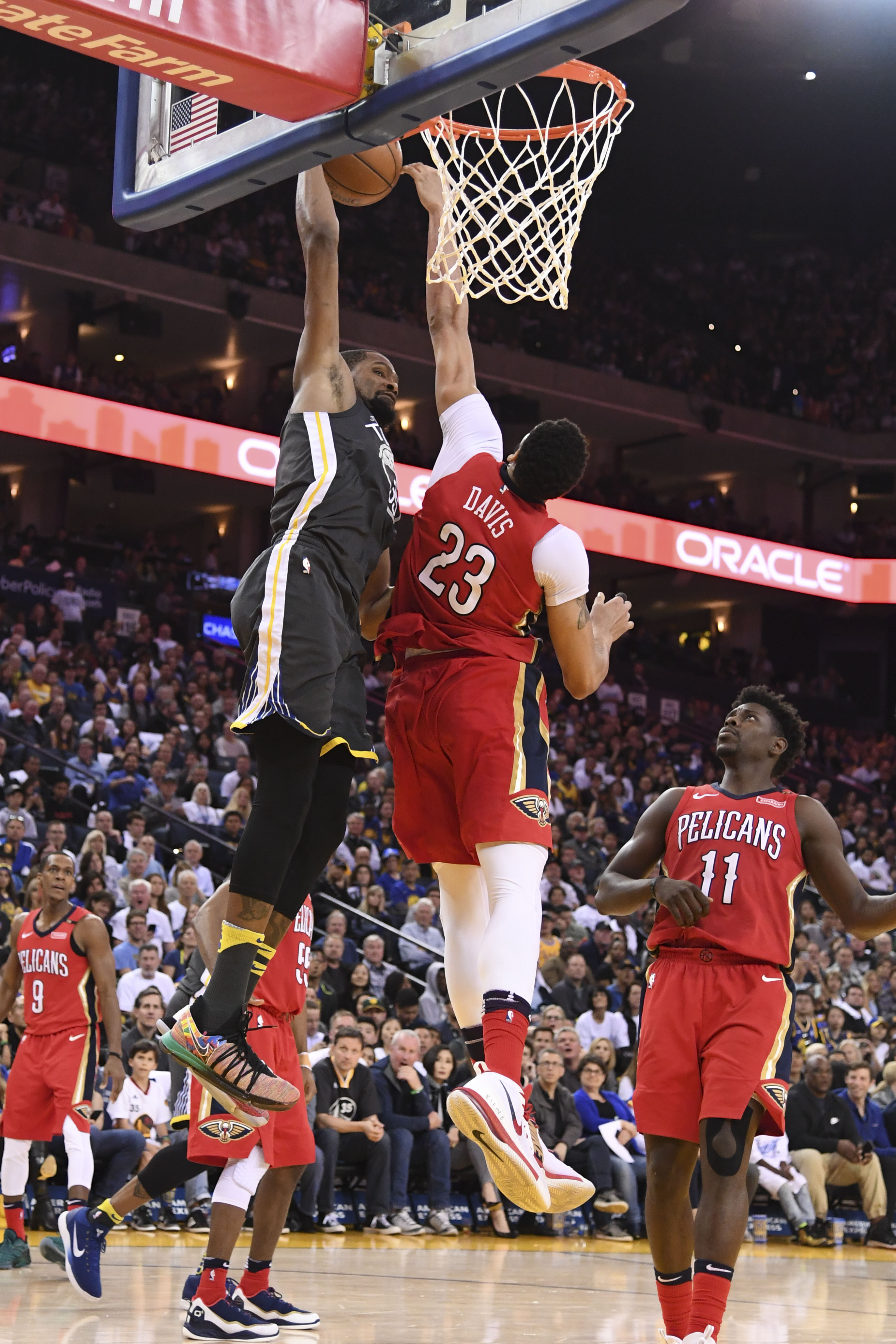 Oakland, CA- The New Orleans Pelicans faced off against the defending World Champion Golden State Warriors for the second of a back to back & the season finale of 4 games in which G State leads 3-0.

The truth is New Orleans needed this win more than Golden State, plus the Pelicans hadn’t beating the Warriors in three years. Golden St playing without Steph Curry(knee) but had all the other All-stars as Kevin Durant and company made a game of this one.

The Pelicans came out and did their best to maintain an edge, team star Anthony Davis battled mono e mono with Kevin Durant. Davis finished with a team leading 34 points 12 rebounds and 4 blocks on 13-24 FG shooting in 40 minutes.

The Pels took the lead from the start of the game into halftime 67-65 then the Warriors got going behind all-star Kevin Durant’s 41 point & 10 rebound effort. Durant along with all-star Klay Thompson(18 pts) & guard Quinn Cook(21 pts) allowed Golden St to take the lead in the second half of the game.

The Pelicans locked in behind the sturdy and impressive play of forward Nikola Mirotic (28 pts) combined with guard Jrue Holidays (25 pts). Both guys were exceptional tonight turning in excellent performances on both the offense and the defensive ends.

New Orleans who did allow the customary too many wide open shots on the defensive end, did however held the turnovers down to an unbelievable 8. The Pels even scored an impressive 26 points on Golden St’s miscues.

When it came down to crunch time Pel guard Rajon Rondo dissed out 17 assists including a few to guard Etwaun Moore who was a perfect 7-7(FG) 1-1(3PT) for 15 points. Rondo added 12 points plus a crucial steal on Kevin Durant that helped the Pels win the game 126-120.

New Orleans(46-34) win their 3rd in a row and now must travel to Los Angeles(42-38) to take on the recently eliminated Clippers, Monday night in the final of 3 away games.

The Pelicans should be very proud of themselves tonight they exorcised some demons in beating The Warriors. They are 5th in the Western Conference Playoff Standings with 2 games remaining.

New Orleans must now stay focused, continue to improve on defense and handle business in the final two games to solidify a high seed with possible home field advantage.