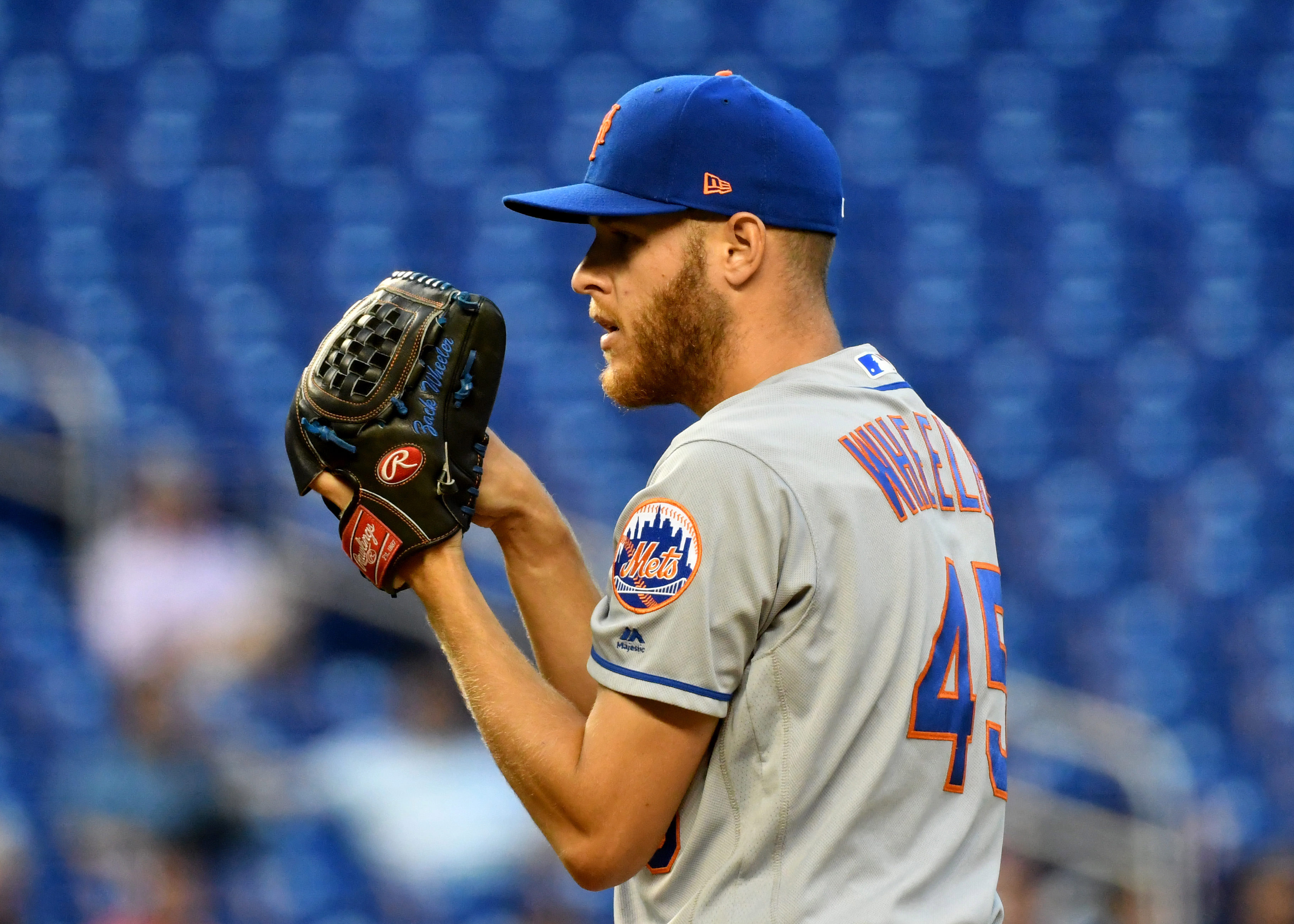 It must have felt great for Zack Wheeler to be on a major league mound again. He was used to the spotlight and the big crowds, rather than the sparse amount of people that would watch the Las Vegas 51’s.

Okay, well … consider this a bridge game. All the excitement of the major leagues without the bother of … noise. Maybe that was all Wheeler needed: peace and quiet. Because he was everything that Zack Wheeler has never been in his major league career: Economical. Efficient. Accurate. It was against a team that might finish .500 in the PCL, but Wheeler threw 56 strikes in 83 pitches, and only gave up a home run to Miguel Rojas in seven innings. This was the fifth ace we’ve been waiting for. And if Matt Harvey or Steven Matz aren’t careful, Wheeler could wind up being the fourth ace if he keeps this up. That’s easier said than done (and yes … it’s the Marlins), but his control is encouraging. If he takes the memories of that game and applies them to games against real teams, then this could be for real. (Or as the kids say: forrealz, yo.)

The problem for Wheeler was that he was going up against Jarlin Garcia, who no hit the Mets through six innings and gave me Chris Heston flashbacks. I was actually thinking “Okay, if the winning streak is going to go down, it’ll go down like this. It makes sense anyway.” And when Tayron Guerrero plunked our 1A catcher in the hand after our 1B catcher was diagnosed with a partially torn UCL, I thought “What better way for a winning streak to end … with scorched earth? Typical Mets.” 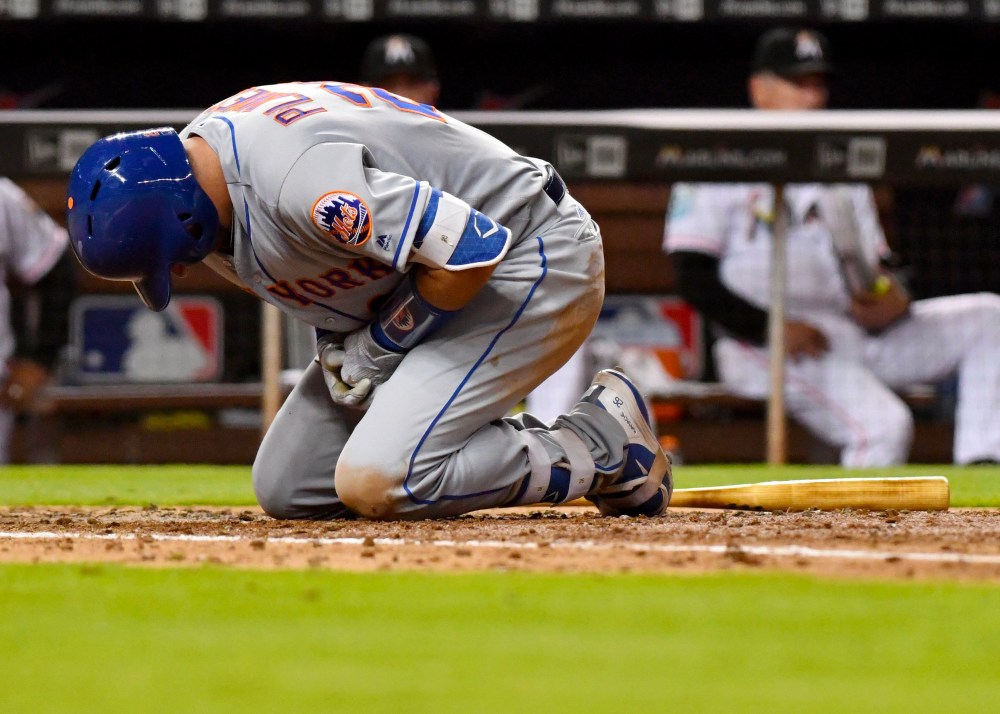 That’s one heck of a black and blue on Plawecki’s hand. pic.twitter.com/iu2JM3f0KQ

But I’m starting to think that these may not be your typical Mets. Chris O’Grady came in for Guerrero and gave up a double to Michael Conforto. Instead of leaving Juan Lagares in the game to face O’Grady, Mickey Callaway puts in a lefthander to face the lefty. On what planet does this work? On the planet that Terry Collins isn’t managing a baseball team … that planet. If Terry had put up a lefty against a lefty, he probably would have spent three hours in the shower afterwards washing away his own perceived shame. (“It’s not your fault … It’s not your fault.”) I don’t know if it was analytics (Gonzalez actually hits four points higher against lefties in his career than Lagares) or a total roll of the dice, but every single thing that Callaway is doing is correct. It can’t be coincidence, anymore right?

Gonzalez hit a two run single, and then Wilmer Flores and Todd Frazier capped off the inning with a double and a sac fly to drive in runs three and four. In the bottom of the eighth, Robert Gsellman came in and struck out the side clean. His movement was the nastiest I had ever seen from Gsellman … to the point where it might have been his best inning of work in his life. Braxton Lee’s swing to end the inning was as confused as Pascual Perez on Interstate 285.

That got me to thinking about bullpen usage. Robert Gsellman is an out of the box choice for an eighth inning guy. But it has all been out of the box. We’ve all talked about how Callaway would distribute the ninth inning and how the saves would be split up. But while Familia has gotten a good portion of the ninth innings, seven different pitchers have started the eighth inning in the eleven games this season. Anthony Swarzak got the first two which were both in blowout wins, Jacob Rhame got two, A.J. Ramos got two, Hansel Robles got two (one blowout), Seth Lugo, Jerry Blevins, and now Gsellman each have an eighth inning. Collectively, the Mets have given up two runs in 11 eighth innings, and they came in the second and third game of the season. Nothing since during the mostly close games that they’ve played.

Ramos got the ninth inning on Wednesday and finished off an impressive 4-1 victory over the Marlins. Hey, you can only play who is on the schedule, right? Well if you want a step up in weight class you’re going to get it, as the Brewers come in on Friday for three, and then they renew acquaintances with the Nationals for three. And by the way:

With the Red Sox loss to Yankees, the Mets now have the best record in baseball. They’re the first team since the 2013 Atlanta Braves to start season 10-1. (Those Braves went 12-1 to start.)

You want more good news: Plawecki’s x-rays came back negative. Which is good, because catchers are important. And the Diamondbacks would probably ask for a lot in exchange for Anthony Recker.

In our daily Wake-Up Call, we get you ready for the day with a complete look at all things Pittsburgh Pirates. Last night, the Pirates...