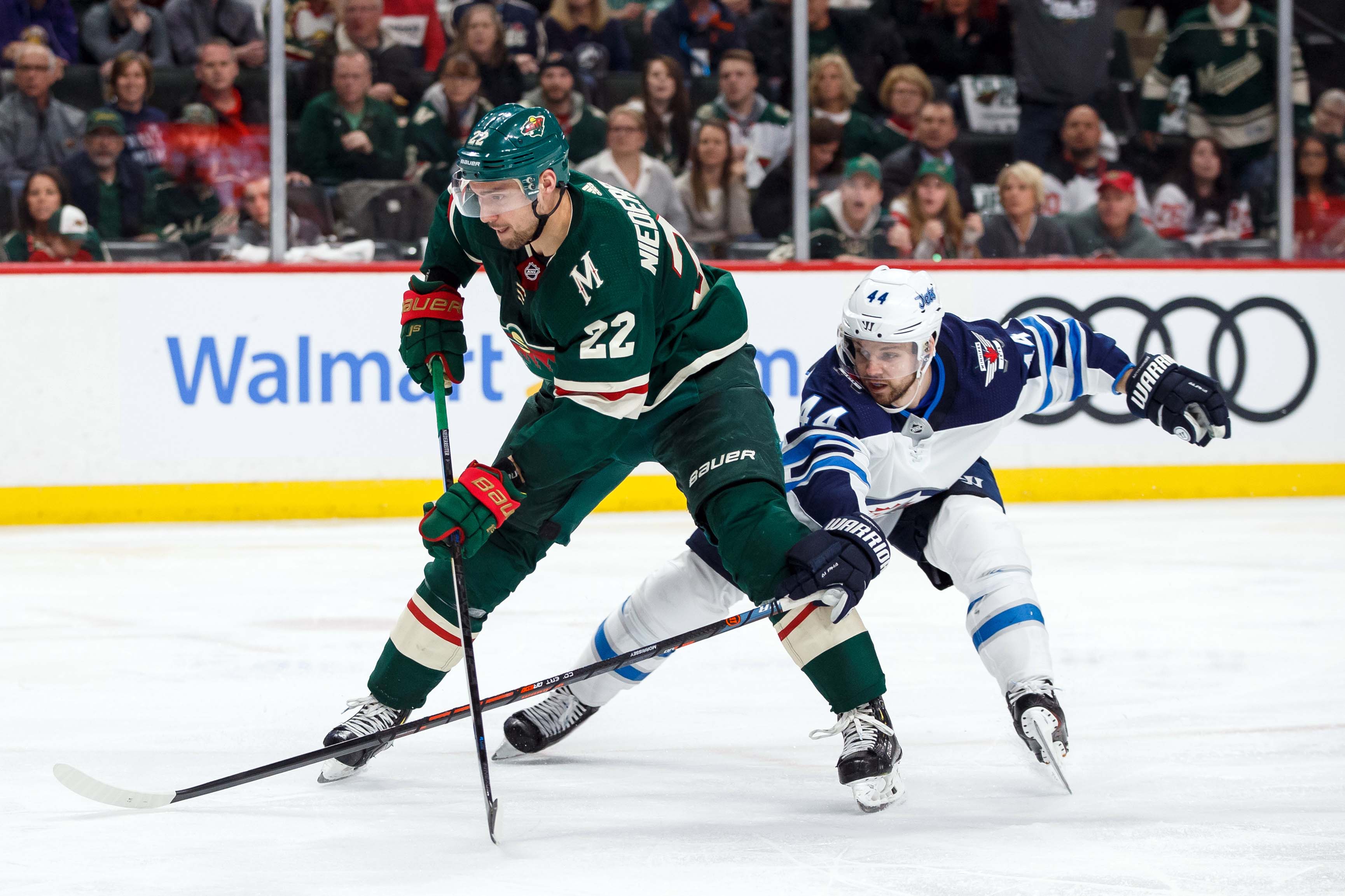 The Zapruder film, the infamous footage that supposedly caught the last moments of then President John F. Kennedy’s life on that fateful November 22nd, 1963 day in Dallas, Texas.  Since then experts have poured over the footage looking for various clues to confirm or debunk various conspiracy theories.  Yet, no other film has probably ever been as closely dissected as that one.  On a far lighter note, Game 3 of the playoff series between the Minnesota Wild and Winnipeg Jets has provided its own mini-Zapruder film and what you see in it varies on the eye of the beholder as this Tweet which shows two angles of a hit by Marcus Foligno on the Jets’ Tyler Myers illustrates.

In a poll by the same Twitter account (@NHLJetsNation) over 3,300 votes on a poll with the question whether Foligno’s hit was dirty was a predictable 62% in the affirmative.  But was it?  Foligno and the Minnesota Wild insist that such an assertion is ridiculous but will this storyline boil over into tonight’s game?  Or will it just be another footnote of yet another video inciting pointless social media outrage?

1st Period Thoughts: Well let’s talk about the elephant in the room. This afternoon I was at work and a notification popped up on my phone. The Wild will be without Zach Parise for the rest of this series with a broken sternum. Just when he seemed to be finding his scoring touch after his extended absence due to back surgery, this really stinks. Between the injury and just needed extra skaters, the Wild have recalled Sam Anas, Ivan Lodnia, Zack Mitchell, Alex Grant, Brennan Menell, and Zach Palmquist. Now onto the game. We’re tuned into the national broadcast instead of the local broadcast on Fox Sports North. While I love the call by Gord Miller and Joe Micheletti over Anthony LaPanta and Mike Greenlay, I will admit I really miss seeing the shot totals throughout the game. One thing I would really like to see in this game, is for Minnesota to score the opening goal. It’s definitely needed for the self-esteem of this team, especially considering the injuries they’re working against. Although with all the callups and Parise’s injury, it is Tyler Ennis getting the call tonight. My thought is Minnesota wanted to go with NHL experience over any other possible contributing factor. Although neither team is really excelling tonight when it comes to shots on goal. About seven minutes into the opening period, Winnipeg has one shot on goal and Minnesota has two. However, it only takes one shot sometimes to make a difference, so in a scoreless game at this point, I’m not going to worry overmuch about shots on goal. And for an interesting trivia factoid, Jordan Greenway is the only player to play in the NCAA playoffs, Olympics, and NHL playoffs this season. Just past the midway point of the period, the line of Mikael Granlund, Eric Staal, and Nino Niederreiter along with blueline presence of Matt Dumba was buzzing. With just about every game, the play of Joel Eriksson Ek improves. Not only does he improve, but he makes a difference. He’s not afraid to go into the “dirty” areas behind the net and into the corners. There would be a collective gasp amongst Wild fans, coaches, and players. With just over five minutes remaining in the period, Dumba would head down the tunnel. Dumba got hit by a shot, but it appears that the TV timeout was all the time he needed and he would be back on the bench. The second half of this period is feeling a bit like Sunday’s game, and if they can keep this up, it can only bode well for the Wild. In fact, I think we seeing the Wild’s character showing. When this team is down with injuries, they step up. With just over four minutes remaining in the period, Jacob Trouba would get called for interference. The officiating has been questionable in this series, but tonight you have to wonder what they’re thinking. Staal would get leveled by Josh Morrissey with a blatant and dangerous cross check to the face. Then to add insult to injury, the Jets would get the opening goal with 28 seconds remaining in the period by Mark Scheifele. The worst part, is that Staal will probably need to go through concussion protocol tests during the intermission. If the Wild lose Staal because of a concussion, it will be very difficult for Minnesota. The officiating in this series has been a joke, and not of the humorous variety.

2nd Period Thoughts: During the intermission, the NBC broadcasters were calling Morrissey’s crosscheck a suspension worthy move. Whether the league does that, is another thing. And the fact that Morrissey picked up an assist on Scheifele’s goal was that much more painful. The Wild were one missed lifted puck away from tying this game early in the period. The Wild would have a 3-on-1, but Dumba was unable to lift the puck. It’s those kinds of missed opportunities that can come back to bite you in the end. Ennis would show his NHL experience early in the period as well. His presence and skating would help keep the puck in the offensive zone, unfortunately nothing would come of it. I would like to see a little more piss and vinegar from the Wild after the hit on Staal. Channel the anger into determination in the offensive zone. Use it to defend your ice. Take a stand that says “I’m not going to be pushed around.” We have bigger players like Charlie Coyle but he rarely (if ever) uses his size to create offense. There are nights when it’s players like Granlund who are more physical. I don’t want Granlund having to play a physical game because others won’t. And speaking of Granlund, he has now headed down the tunnel because of a cut. This period has featured the Wild in their zone more often than not. That makes it difficult to generate offense. Offensive pressure would finally be created by Jason Zucker which is what needs to be seen. That pressure would also draw a penalty with Connor Hellebuyck getting called for slashing. The frustrating part is you have Granlund in the locker room getting patched up and Mikko Koivu of course gets loads of power play time. Koivu then ends up negating the power play by hookie Dustin Byfuglien. If you’ve been reading us for a while, you know that we’re not big fans of Koivu. He has had a horrid season, yet for some reason we keep rewarding him with contract extensions or new contracts. Why? The Wild would kill the penalty and get Granlund back on the bench and the ice. Granlund’s return definitely created some energy, but now that energy needs to be turned into action, and more importantly, results. It’s a good thing Granlund is back, because he’s about the only player in green willing to take the opposition into the boards. Again, why is he the one doing it? There are many other guys I would rather play the physical game, yet he’s the only one willing to take the body. At this rate, I guess we should count our lucky stores that this is still a one-goal game. Minnesota needs to find an goal early in the third period if it wants to have a chance in this one.

3rd Period Thoughts: Well Joe Micheletti stated the obvious early in the period. For the Wild to get on the board, they’re going to need lots of bodies in front of Hellebuyck. For the Wild, that’s nothing new. They just don’t have the kind of players who are willing to play that game, at least on a regular basis. Somebody needs to make the decision and say “yes, I know I’m putting myself at risk, but I need to take a stand in front of the net.” That person would either create the needed screen in front of Hellebuyck, or would be there to tap in a loose puck. The Wild seem to only be able to do one and done chances. Winnipeg is doing their best (and succeeding) at taking away the second chances as well as keep them to the perimeter. In fact, tonight feels a lot like that losing streak earlier this season. You keep the Wild to the outside and you stand a very good chance at winning. And you know very well that Winnipeg was well aware of that fact. And with their physical game, they knew they probably wouldn’t have to work hard at keeping the Wild skaters to the outside. Looking at this team, and what is missing on this roster, the chances of Chuck Fletcher getting it in the off-season is slim. The players that need to be off-loaded are still under contract. And trading for what is needed, will end up mortgaging the future. The other 30 teams should be well aware at how desperate Minnesota is for new blood and cap space. Once upon a time, the Wild had one of the best prospect pools in the league. But that was traded away for players that never brought the success promised and needed. With just under 4 minutes remaining, Minnesota would be bailed out by a post. They need to find a way to bail themselves out with a goal. But no one really seems to be that interested in doing that. And even worse, they can’t even clear the zone in order to pull Dubnyk for the extra attacker. Although, I’m not a big fan of pulling the goaltender in the kind of game where the Wild don’t really deserve that chance with how they played. Instead you usually end up with an empty net goal. Just like I hate him on the power play and overtime, I also hate Koivu as the extra attacker. No one wanted to take the puck. No one wanted to take the body. No one wanted to get into the dirty areas in front of the Winnipeg goal, and Scheifele was able to score the empty netter. The one player who truly played well was Dubnyk. He didn’t let up the soft goals we’ve seen earlier in the series and the season as a whole. So now this game heads back to Winnipeg, and you can believe they’re going to do everything they can to win the series on home ice.