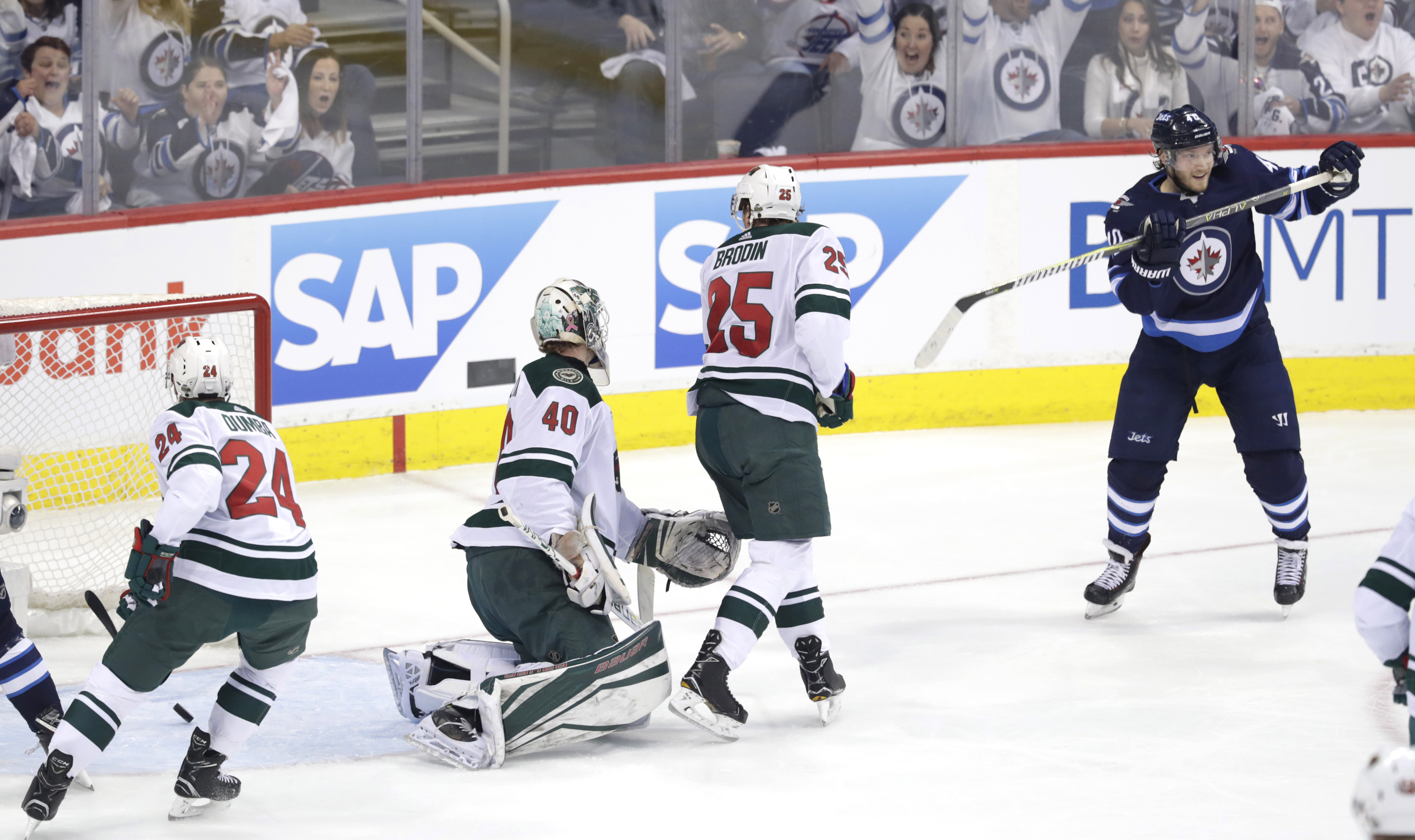 Misery loves company.  That’s where the Minnesota Wild are at the moment.  Injuries pile up as $15 million dollars in two alternate captains sit with different broken bones.  Toss in a missed call that drove a fanbase nuts and caused Wild Head Coach Bruce Boudreau to declare “it cost us the game” and the vultures are out circling on the 2017-18 NHL season for Minnesota at least.  If there is any solace, at least we won’t be the first team eliminated from the playoffs!?!?  Thanks Los Angeles and Anaheim!

Still, jokes aside most fans expect the season to come to an inglorious end in a season which definitively proves this is a franchise that is merely spinning its wheels with another 1st round exit.  Or will we be surprised and see some fight and urgency from the Wild to will this series to at least 6 games with a win in Winnipeg?

1st Period Thoughts: Interesting. Looking at the injuries for the Jets, they will be without Niklas Ehlers and backup goaltender Steve Mason. Of course when you start thinking of the possibilities of what those injuries could entail, 31 seconds into the period and Jacob Trouba has the opening goal. I kind of feel like packing up my toys in the sandbox and just going home if that’s the kind of game the Wild and goaltender Devan Dubnyk is going to have. In my day job, I’ve had a long, busy week at work, and relaxing sounds good. The Wild would get the first power play of the game with Joe Morrow getting called for holding. But of course you have to win the draw in the offensive zone, which of course they don’t. And the power play has been a classic example of the “powerless play” nothing ever getting set up and looking disorganized for the entire two minutes. Well this game has certainly changed for the worse. In a draw in the Minnesota zone, Bryan Little would deflect the puck off of a Dustin Byfuglien shot. While looking at the goal again, there wasn’t much Dubnyk could do. However, my faith in his abilities at this point are fairly minimal. I would feel better with the change to Alex Stalock, even though I highly doubt that a change at this point would make a difference. It’s hard to feel anything for this team when the players in white don’t seem to be giving a damn. And the lack of caring became yet another goal because of a bad turnover by Matt Dumba. The Jets’ third goal of the night (and period) came from Brandon Tanev. At this point, Bruce Boudreau needs to pull Dubnyk and put Stalock in his place. And of course as I’m tying this, Joel Armia makes it 4-0 on ten Winnipeg shots. Stalock is finally in net. I was chatting with some fellow Wild fans about this game, and of course the conversation was “in an ideal world (meaning there were no no movement/no trade clauses) who on this roster would you keep” game. My main thing would be what would this team be like without Mikko Koivu. He has too much control and influence at all levels of the team. With less than a minute remaining in the period, Marcus Foligno would take a penalty for cross-checking. At this point, I’m just glad this period is over. The folks on the national broadcast just said “what an effort by the Jets.” Excuse me?!?!?! The Wild did all the work for the Jets.

2nd Period Thoughts: Well you know how things are going to go, when you can’t even score on what is essentially an open net with Connor Hellebuyck being caught out of position. Five minutes into the period, and I really don’t feel like watching this let alone having to write about it. One of the national broadcast types made a comment about the clock working against the Wild. Honestly, I’m at the point where I wish it was running clock like they have in soccer. I really just want this season over. It’s a rare day that I want the Wild to lose. But to somehow come back and win this one, simply just delays the inevitable and I’m ready to have my evenings back to myself. Evenings are always a mad dash to get dinner cooked and eaten before the game starts. Well, Stalock came up big on a point blank shot by Mark Scheifele. Now we get to see if the Wild’s power play has improved from the first period, with Kyle Rau drawing an interference penalty. The power play only came about because Rau kept his feet moving. However, the power play is much like the first one. Not one person is will to create a screen. Not one player is willing to take the abuse in front of Hellebuyck. So again, powerless. Interesting observation. We’re watching the national broadcast on USA Network, which is nothing more than the CBC broadcast. If they’re able to show shots on goal on the screen at all times, it makes no sense that the fools at NBC Sports can’t do the same. It’s one of those stats that I should be able to see on the screen all 60 minutes of the game. I don’t like watching games on Fox Sports North simply because I don’t want want to listen to Anthony LaPanta and Mike Greenlay, but at least I can see the shots on goal stats for the entire 60 (or plus) minutes. I almost had to get excited for a scoring chance late in the period by Nino Niederreiter but then I had to remember that he hasn’t done much lately. Oh, and another power play chance, this time because Jason Zucker got hauled down. The closest the Wild have really gotten to a goal was a puck off the post by Zucker during the course of the power play. Isn’t that exciting? Then to make things “more” exciting, the Wild would get called late in the period for too many men on the ice. Not that it’s going to make much of a difference, but it’s a bit annoying that Minnesota has gotten called for too many men, when the Jets have been guilty of this infraction more times that I care to count, yet never got called for it. Thankfully, we now have two periods down. 20 more minutes and we can pack this season up and forget about it.

3rd Period Thoughts: The Jets scored 31 seconds into the first period. Well the this period should be no different, this time Scheifele scoring 32 seconds in on the power play. I’m looking forward to switching allegiances to the Nashville Predators next round. And I sincerely hope that the Preds put the beatdown on the Jets. The hard part about that goal, is once again we’re seeing the Matt Dumba who just stands there like a deer in the headlights. The best part is seeing the broadcasters polish the proverbial balls of Hellebuyck. They’re really talking him up, but not really pointing out that the Wild haven’t really made him work. Do they really think the Predators are going to play like the Wild. Oh hell no. They’re talking about Hellebuyck like the national types did with Jake Allen when he made the Saint Louis Blues look invincible. And since we’re talking about the ridiculous, apparently on Fox Sport North, LaPanta just called this a “potential elimination game.” I know it’s April 20th and all, but not even Snoop Dogg himself would make such a ridiculous comment. I can’t even concentrate on this game. I’m paying far much more attention to the snark on Twitter and other online outlets. Far more enjoyable than this game. As a Minnesota sport fans, you have to be professionals at sarcasm and snark, because unless you play for the Minnesota Lynx, you’re far from being a true professional athlete. Since the Minnesota Wild have given me nothing to write about, except ineptitude and apathy, I am going to sign off. If any of us thought there was going to be a different outcome to this series than what we got, I have to say you’re way more optimistic than what is healthy. In fact, that might be classified as delusional. I’m tired of the one and done playoffs. However, until the Wild can clean house from the general manager to the players on the ice, things are not going to change. Yet this is a team, that for whatever reason refuses to make the changes it needs to, and rewards players like Koivu with unwarranted and undeserved contract extensions. Things won’t be changing soon, and it’s going to be a long haul. I suggest that many of us take a much needed break from the Wild during the off-season.