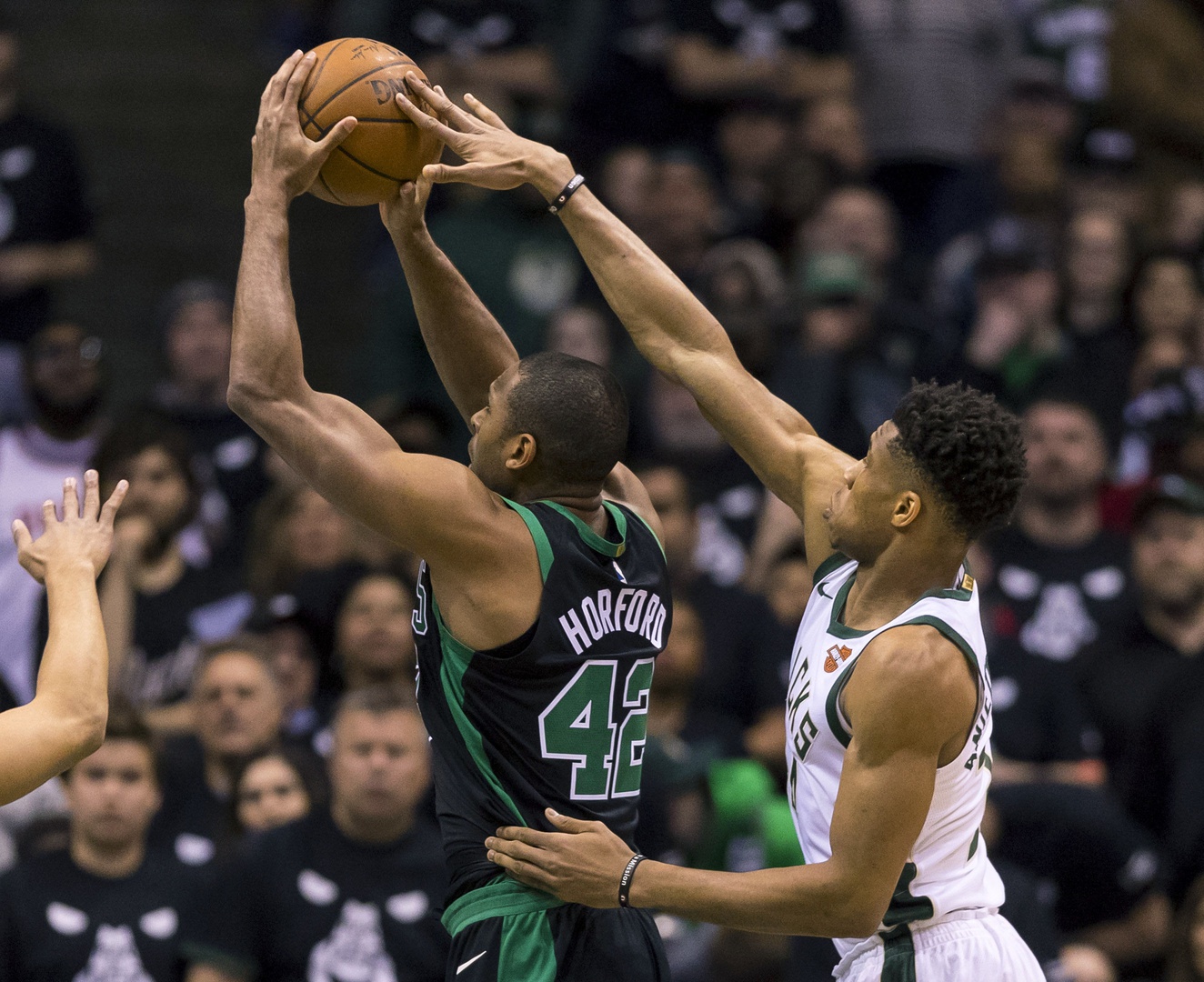 The Milwaukee Bucks utterly embarrassed the Boston Celtics in Game 3. I don’t want to talk about it beyond that. MOVING RIGHT ALONG.

At least Game 4 was competitive for its duration. Even during the ugly first half, Boston never fully fell apart, but they absolutely couldn’t bring enough intensity for 60 percent of the game and lost control of the ball constantly. Despite Jaylen Brown doing his best all game and a team-effort rally in the final frame, the Celtics lost 104-102 in this splitting of this series.

Boston knew full well the key to putting the pain of that Game 3 loss behind them would come through bringing a baseball bat to the fistfight the prior match had been. They did exactly that early on. On the first Celtics-led possession there were three offensive rebounds, something the Bucks often prevented last time around. It didn’t end in a score for Boston, but it set the tempo. Aron Baynes did a lot of the good work in that department.

The best way to describe the Celtics’ defensive improvement is to note that Giannis Antetokounmpo didn’t score until seven minutes passed in the first frame. They also kept Khris Middleton scoreless and shut down Bledsoe to the tune of just one made FG in the quarter. Yet the Bucks bounced back from the neutering the Celtics put them through as Giannis got cooking.

Then, they built a small lead on the backs of Jabari Parker (who is good, and shouldn’t have been underestimated) and Thon Maker (who is a lil’ buster and I’m done with him; get him out of here). Credit where due to Milwaukee for capitalizing on what may have been the worst inbounding play of all time by Mook Morris, leading to a Matthew Dellavedova steal and layup. On the plus side, Delly got shouldered and shoved a bunch of times (including a beauty of a bump from Greg Monroe), but it didn’t make up for the 24-17 deficit Boston put themselves in with sloppy ball, ruining a good start.

What I couldn’t understand was Milwaukee’s ability to contain Jaylen Brown, Terry Rozier and Jayson Tatum—or arguably their lack of confidence, which would be somewhat understandable in the latter’s case. (I realized, gradually, that the main Tatum issue was his inability to exploit his arm length against a team whose entire f****** roster has considerable arm length.) The stoppage of the young fellas continued as the second quarter progressed, and contributed to the Celtics’ now double-digit deficit. But turnovers were and have been the main culprit for Boston on the road in this series. When Brown did start to heat up, it made a difference, as he earned 10 of his 16 points for the half in this second frame. It simply wasn’t sufficient to paper over Jabari Parker’s emergence as a viable third option for Milwaukee, which, when Boston is this short-handed, makes them a real problem. The Celtics had decent luck getting to the line on drives to the cup, but often couldn’t capitalize, going 7-12 at the stripe. This conflagration of miscues and misery on Boston’s part amounted to a 51-35 lead for Milwaukee at the half.

It looked a little bit better for our heroes early in the third half, even as the Bucks’ continued offensive strength remained a huge hurdle. Tatum got going through force of will, especially at the line, and helped fuel a 15-4 run that put Boston at least within striking distance (down 69-60 at the 3:20 mark). With the help of Jaylen, who started cooking from deep, and Al Horford, who encouraged the squad to up its pace with some dunks on the break, this became a 20-8 run. Milwaukee began breaking down somewhat defensively as well, allowing second chances in a way they hadn’t since the first quarter. The Middleton-Parker tandem kept the Bucks alive as Giannis had to sit to avoid foul trouble, but the Celtics made it within eight points at the end to just be down 75-67. They are, shall we say, familiar with comebacks of this size.

Baynes, who remained a steady contributor even through the team’s 20-point-deficit doldrums, started the hard work in the fourth quarter with rebounding and taking a lob from Shane Larkin for a motivational dunk. Jaylen Brown stayed hot on both ends of the floor, including a major defensive bailout after a Boston turnover that could’ve led to an embarrassing Milwaukee bucket. The Celtics as a whole couldn’t retake the lead—though they did retie it briefly—due to Giannis’s brute force and Bledsoe and Middleton finding ways to the line when Boston defense forced bad shots out of them.

With just under two minutes to go, Brown’s sustained heat and some well-timed treys from Rozier (at last) got the Cs within a point, and a high-swagger isolation jumper from Tatum, his bread-and-butter since he was in high school, gave Boston their first lead since Q1. A turnover, sadly, would give Milwaukee a fast-break opportunity to get Malcolm Brogdon wide open for a three to steal the lead back, and Giannis got super lucky on a layup the other end to bring it 104-102 Bucks. Morris missed his chance at an OT-forcer in part due to tough defense by Middleton, and that number would be the final tally.

HOT ISH: Jaylen beat his previous playoff record and hit a game-high 34 points with efficient and dynamic scoring; Tatum’s excellent second half made up for the difficulties he experienced early on; Baynes remaining effective against this Bucks team; Larkin with a few nice dimes.

NOT ISH: I’ve swayed back to the DAMN YOU MOOK side of my Marcus Morris seesaw after that blown ISO and that hiiiiideous inbounds pass; everyone turned the ball over; the continued success of lil busters Thon Maker and Matthew Dellavedova.