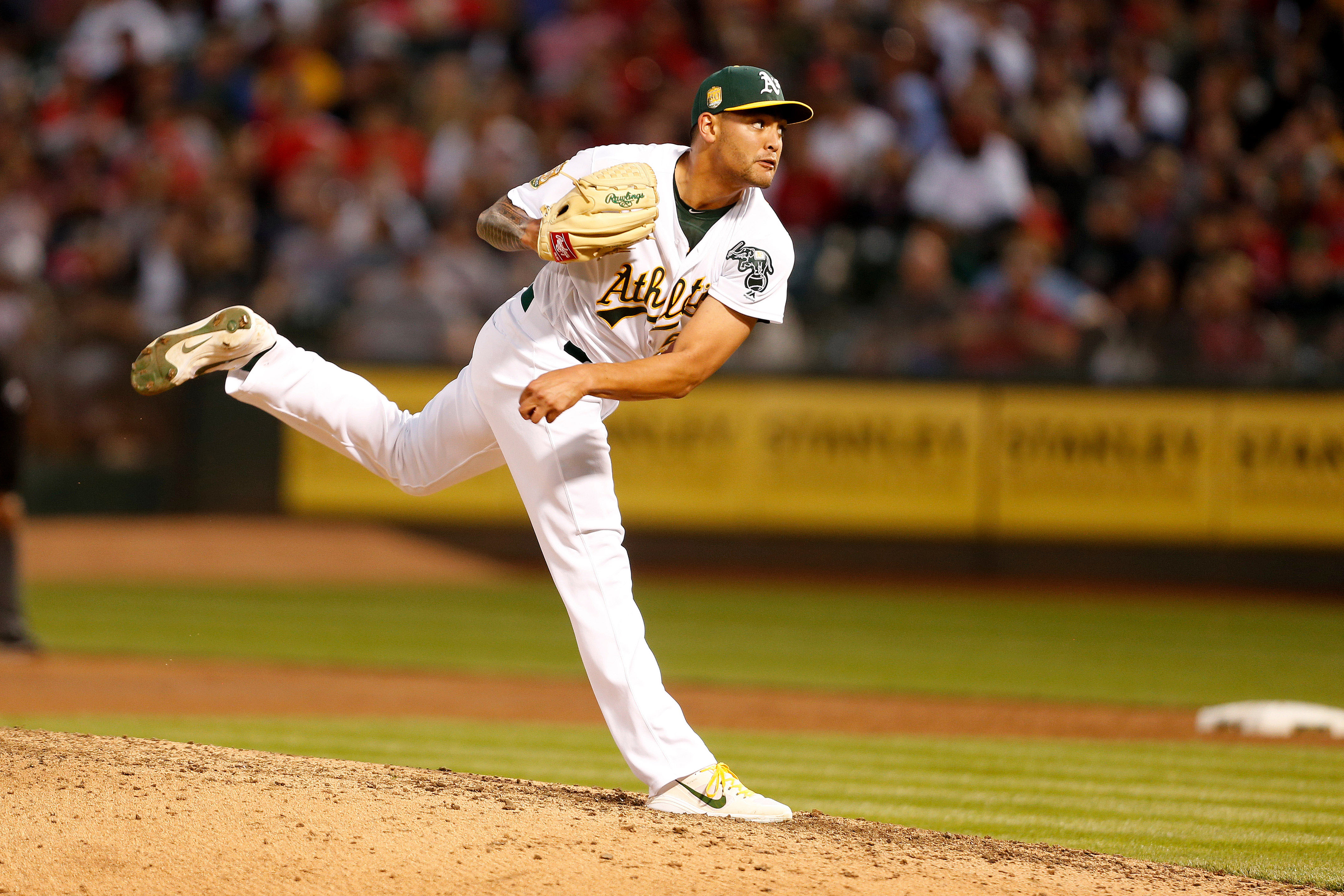 So, you could say that Oakland Athletics starting pitcher Sean Manaea had himself a pretty darn good weekend.

The Boston Red Sox have easily been the best team in baseball to start the 2018 season, and all Manaea did was no-hit them while striking out 10. The last time a hurler accomplished this feat against a team leading the league in runs scored was Dave Stewart back in 1990 (also for the Athletics).

There’s no denying how impressive this performance was, especially since it was the young southpaw’s first career complete game. However, Saturday night is more or less a continuation of what’s been a fantastic start to this season by the 26-year-old.

Pitching deep into games on a somewhat regular basis was one of the things that has escaped Manaea throughout the early part of his big-league career. In 53 starts entering 2018, he’d completed at least 7 frames on 12 different occasions. And of those 12 occasions, he pitched into the eighth just twice (actually completing eight once).

So far in 2018, he’s already pitched into the eighth inning three times out of five total tries, lasting fewer than seven innings only once.

What’s even better is that his production has been rather consistent across the board, as well. Manaea’s allowed just five earned runs in 36.2 frames this year, with two earned runs being the most he’s given up in a single start.

He unfortunately has only registered a 3-2 record despite a 1.23 ERA and a 3.46 SIERA to go along with a 23.1% strikeout rate and 4.6% walk rate, but it’s rather clear that he could be poised for a true breakout season.

If that ends up being the case, it could have a lot to do with improved control around the strike zone.

Living in the Zone More Often

After establishing the fact that Manaea had an issue with pitching deep into games on a consistent basis, is it overly shocking that his command has something to do with it? Probably not, but it also helps us see the difference it’s made thus far in 2018.

The decrease in walks is the obvious part — that 4.6% rate mentioned above would be a single-season career high if he can sustain it (6.2% in ’16, 8.0% in ’17). Outside of currently allowing a 12.9% line-drive rate, though, the left-hander’s batted-ball profile doesn’t look drastically different from years past.

What is on an upward trend is Manaea’s zone rate, which is the percentage of pitches seen inside the strike zone. After posting marks of 45.8% and 44.0% in his first two seasons, that number is currently up to 47.2%. As a frame of reference, the league average for this category among starters in 2017 was 44.9%.

So, he went from pounding the zone at just about a league-average rate to accomplishing that at a few ticks above average. This doesn’t seem like a huge difference, but judging from his low walk rate and a 19.4% soft-hit rate that’d also be a career-best number, the impact has been felt.

I mean, just look at the man’s results through five starts.

A Slight Shift in Pitch Usage

When looking at how Manaea is currently using his four-seam fastball, slider, and changeup compared to previous years, there doesn’t appear to be much to look at. That’s not entirely the case, though.

He’s throwing his fastball 56.4% of the time — two percentage points below last year’s number — and is using his changeup at a 27.1% clip — over three percentage points higher than 2017. This is significant because of how the effectiveness of that offspeed offering has fluctuated in recent years.

After producing a 50 wRC+ against Manaea’s changeup in 2016, opposing hitters jumped that number up to 122. Through five starts, he’s limited the opposition to just a 16 wRC+ with a significant rise in strikeouts (30.8%) and ground-ball rate (62.5%).

And just in case you were wondering, Manaea threw his changeup 29.6% of the time during his no-hitter. All of his pitches have performed better so far this year, but seeing the changeup make big strides at this point is encouraging.

Two Things That Must Stabilize

There’s no way discount the kind of start Manaea has experienced through March and April. However, it will be interesting to see to what degree he can sustain this performance once certain statistics even out.

How unsustainable are those numbers? Well, through Manaea’s first 303.1 big-league innings, he allowed a .301 BABIP and stranded runners at a 71.9% rate. As a couple more reference points, the league-average BABIP last year was .299 (with Lance Lynn‘s .244 mark being the lowest among starters), while the league-average strand rate was 72.1% (with Clayton Kershaw‘s 87.4% being the highest among starters).

Manaea could very well be on his way to a career year, and while his hot start has been impressive, he’s done it with the help of stats that appear unsustainable. The real test will come when these numbers start resembling what he’s done in the past.

For right now, though, the young lefty should continue basking in the glory of his no-no, along with a terrific first five starts to his year. Improved overall control seems to have helped make it possible.