Recap: Celtics Find an Answer for the Freak and Take the Series Lead 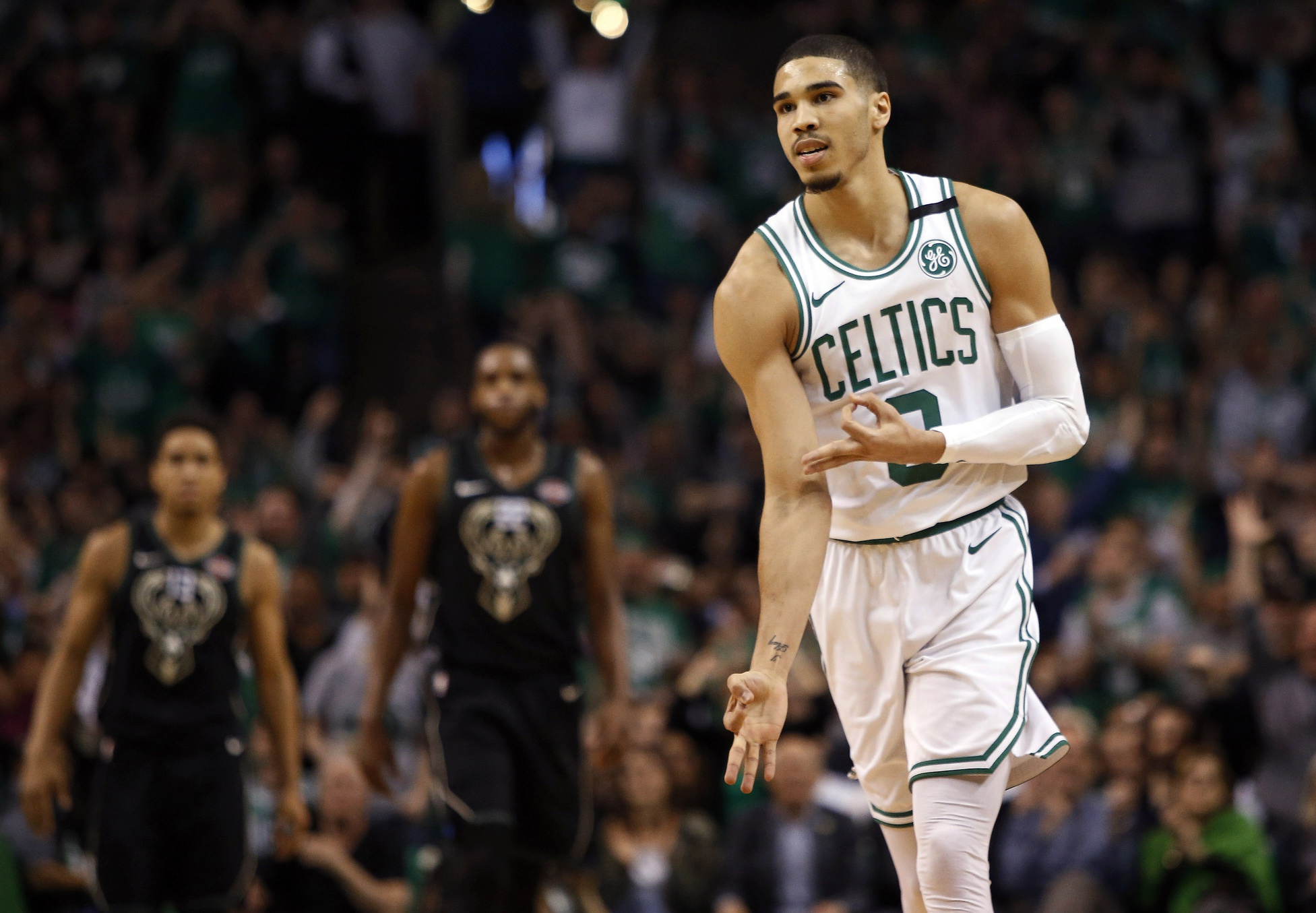 Recap: Celtics Find an Answer for the Freak and Take the Series Lead

The Celtics accounted for and adjusted appropriately against the Bucks strengths, and they countered with their own right-hook on Tuesday night.

Semi Ojeyele started in his first career playoff game and helped hold the Greek Freak to just 16 points on 10 shot attempts; Marcus Smart mercifully made his return to the Celtics lineup and instantly injected the intensity that the second unit lacked in his absence; and Al Horford returned to form after an off-night in Game 4, as he led the team with 22 points and 14 rebounds in the Celtics win. It was a good night for a change.

Your Celtics now travel to Milwaukee and hope to put this series away on Thursday night. Final Score: 92-87

The Celtics and Bucks exchanged opening jabs (figuratively, this time) and remained within one or two possessions of one another through much of the first quarter. Semi Ojeyele was rewarded for his consistent defensive and got the nod to start tonight, which was sure to bring a smile to the young man’s face at least for a short while. That smile likely faded quickly, though, as Semi was tasked with defending Giannis annnnnd, well, it went about as well as you can expect for a first year pro. Semi tried valiantly to stay in front of him, but he was whistled every time he came within arms distance of the Greek and many times relied on his help defense, which came every time Giannis had the ball near the paint.

Marcus Smart was ready to make his triumphant return and was itching to guard the Freak, but Brad Stevens made him sweat it out a bit before subbing him in to his first game action in over a month. While he waited on the bench, Marcus looked as locked in as I’ve ever seen. It probably felt like the longest 8 minutes of his life while waiting to come in to his first playoff game of the year.

Sidebar- “Setting the tone” sounds like a cliche, but given that only 5 people are out there per team, the NBA is unique in that a single player is capable of setting the tone for the rest of their team-and that’s EXACTLY what Marcus Smart does whenever he steps foot on the court.

Back to the action: when he was finally subbed in, Smart immediately got to work by bumping a couple of Bucks (Brogdon and Baker) while the teams organized themselves at the end of a timeout. I wish I had a video proof, but trust me, it happened. Mike Gorman even said how much he loved it during the broadcast. A minute later, Smart was doing Smart things like diving on the floor for a loose ball, or swatting away 2 potential points from going on the board for the Bucks. He was officially back.

As for the entire team, they finished the quarter strong after a shaky start. Boston gave their fans brief Game 4 flashbacks and possible minor heart palpitations once they started 0 for 6 from the field, but quickly rebounded well enough to take a commanding 23-15 lead into the 2nd quarter.

The second quarter was a mixed bag for Boston. On the positive side, Marcus Morris came in and brought his valued insta-offense with him. He hit both attempts from the line after an aggressive take to the rim, and later sank his patented baseline jumper. Conversely, you’d have plays that were tough to watch, such as when Larkin threw the ugliest entrance pass of all time and was picked off, leading to the Bucks scoring a transition triple.

Later, when Semi was called for a God-awful foul call against Giannis, Celtics fans took solace in the fact that it was sandwiched between back-to-back sunken three’s for Jaylen Brown and Jayson Tatum. The momentum was swinging like a pendulum, but the Celtics maintained the lead through out.

Brown drives, kicks and finds Tatum for the trey! pic.twitter.com/rQTrYkJ324

After the Celtics went on a 19-7 run mid-quarter, the Bucks answered at the with a 7-0 run of their own to make the game semi-respectable heading into the third, 48-37.

The story of the game thus far had been the Celtics defense, without question. You have to figure that Giannis was bound to eat one way or another, so his 4/6 for 11 points is acceptable. Aside from the Greek or Middleton – who made 5/12 for 11 points over the half – the Bucks struggled against the defensive adjustments employed by the Celtics at the beginning of the game. They didn’t properly take advantage of Semi in the starting role, nor did they even seem to notice that the Celtics were smaller than usual due to Stevens’ decision to not play Monroe at all. In fact, the Celtics even dominated in rebounding (26 vs. 19), and bench points (19 vs. 7). Fun fact: The Celtics had scored more bench points tonight with two minutes remaining in the first half than they had the entirety of last game.

When the third quarter began, it was evident Jaylen Brown wanted to improve upon his first half performance. He registered just 5 points on 2 of 7 shooting from the field after the first two quarters, which was in stark contrast compared with his previous performances in this series. But if there’s one thing we know about our budding Super Star by now, it’s this: his confidence in himself will not be shaken. The first time he received the ball in the second half, Jaylen fearlessly drove into the teeth of the defense. He hopped into the paint and attempted to shake his defender with a pump fake, but this only drew more Bucks players to the ball. With all of the Bucks jerseys around him, Jaylen wisely decided to pass to a wide open Al Horford at the top of the key. Al banged the three to stretch their lead, which was now up to 51-39.

The difference JB makes for this team on a nightly basis can not be overstated. If anybody had doubts about him coming into this series, Mr. Brown has likely ended those by now. Just look at this info-graphic, brought to you by the good folks at NBC Sports Boston.

He’s been an absolute beast this series. Jaylen added 7 points during the third quarter and contributed to the Celtics rebounding dominance by grabbing 4 of his own.

This game was far from over at this point, though. Semi was soon called for his 3rd foul after Shabazz Muhammad drove to the hoop and subsequently brought the Bucks within single digits, 58-49. The Celtics turned the ball over the following possession, then Delly (I’m sorry I even had to mention him) facilitated the ball around the arc until he found an open Jabari Parker for 3 more of his 17 points (finished 7/15 from the field, with 8 rebounds and 2 assists). The Celtics now had their smallest lead since 8 minutes remained in the second quarter.

A big reason why the Bucks were able to comeback, aside from the suddenly lacking defense? The Celtics equally stagnant offense. Boston went over 4 minutes without making a field goal attempt, and in total suffered a 17-5 run at the hands of Milwaukee during the course of the third quarter. The good news is Boston’s attack mentality is relentless, and even more so when they’re at home. Jaylen Brown’s deep ball at the end of the quarter secured the Celtics lead going into the final frame, 72-61. Brown finished with a relatively lackluster 14 points, 6 rebounds, 2 assists, and 2 steals on the night.

The most remarkable part of the Bucks comeback during Q3 was the fact that Giannis and Middleton weren’t the catalysts of it. The Celtics held Giannis and Middleton to a combined 1 of 6 from the field over the third quarter, and they’d finish with 16 and 23 points, respectively. While the Greek nearly walked away with a triple-double (16 points, 10 rebounds, 9 assists), both men were largely ineffective thanks to a rededication by Boston on the defensive end. For instance, when Middleton tried his patented “I’m taller so I’m going to shoot over you” move on Rozier in the fourth, Terry’s tight defense forced him to fade away and lean at an awkward angle, leading him to miss the attempt. Later, Giannis thought his long arms and height advantage equaled an easy lay-up against the smaller Semi, but he didn’t account for Marcus Smart jumping out of his shoes to offer the help defense and smack his attempt away.

The Bucks weren’t coming back tonight. When they brought it close and the Celtics needed points, the boys in Green relied on their vet to find the right situation with the ball. Celtics players know to cut to the basket whenever Big Al has the ball because they’re confident he’ll find them when/if they get open – Jaylen Brown found an open spot underneath the rim and took advantage of the Bucks’ lapse in defense.

The Bucks weren’t going away, though, and answered with some timely buckets to keep the pressure on the Celtics until the final seconds. The Celtics unofficially sealed the deal soon after Horford’s assist to Brown when Marcus Morris inbounded to Smart with less than a minute remaining. Pressure forced Smart to – you guessed it! – fall to the floor in dramatic fashion, but he somehow found the open Horford who retrieved the rolling pass and dunked home the ball to solidify the win. Final score, 92-87.

Terry was the second leading scorer on the team, with 16 points on 4 of 10 shooting. He also had a few good looking dimes tonight and finished with 5 assists and 3 rebounds.

Jaylen Brown / Al Horford pulled this move at least three times tonight. One person draws the defenders low while the other sat alone and ultimately drilled their attempt. Look for the Bucks to squash those attempts on Thursday, and hopefully the Celtics counter with pump-fakes & takes to the rim.

See, Milwaukee?! We can do alley-oops, too!

Smart lobs it up, Horford throws it down! pic.twitter.com/tyPPXXAHd8