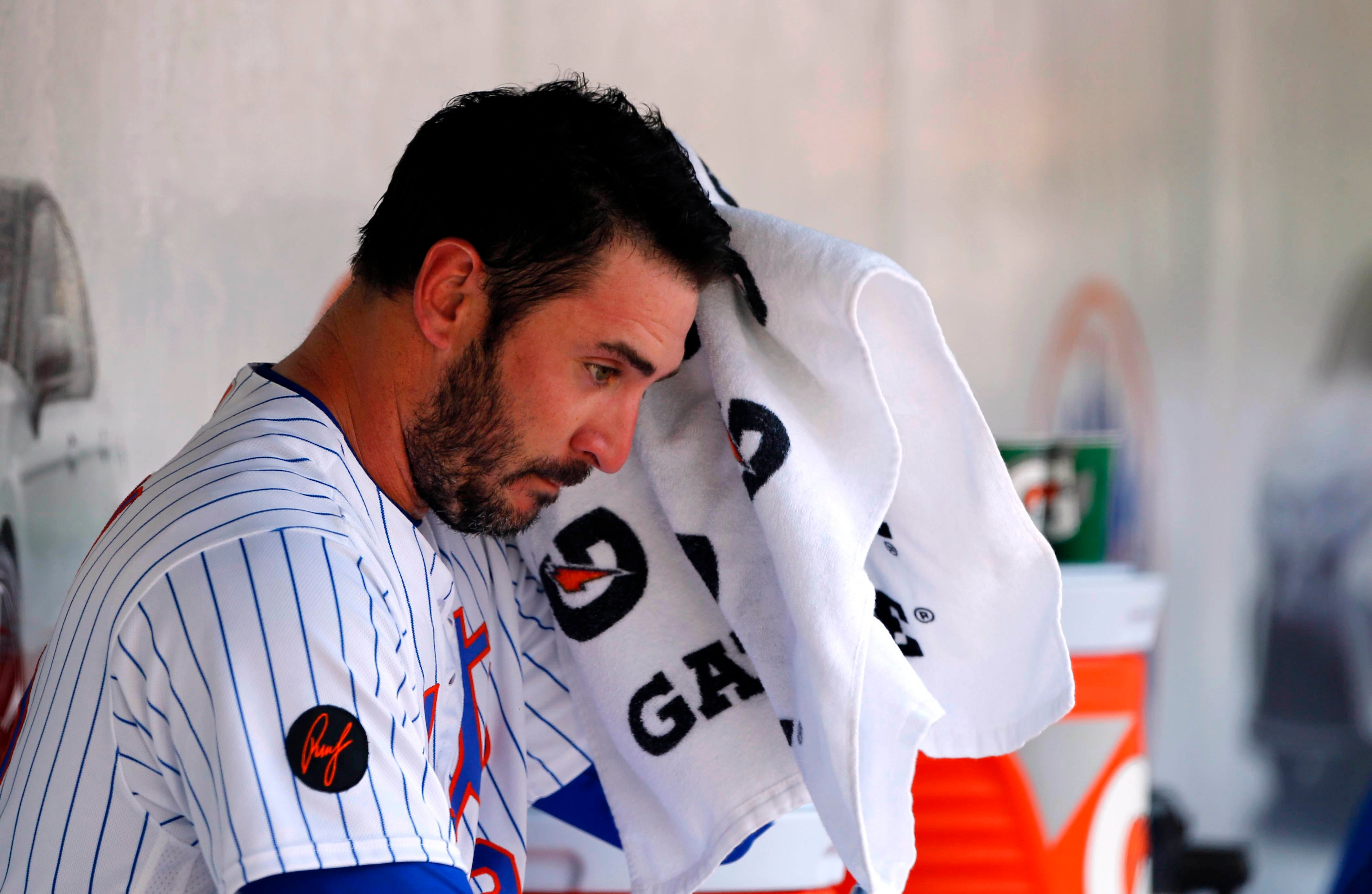 Matt Harvey after leaving the game in his last appearance as a Met.

Who could have predicted that the Met organization would cut ties with Matt Harvey before Tim Tebow?  It has been clear for a while that Harvey was destined to become yet another one time Met fan favorite who would not be getting a farewell tour.  And the DFA looks like the right move for both the Mets and Harvey.  But it’s still a day for regrets and to wonder what might have been.

The Mets were coming off four straight losing seasons when Harvey rose to stardom in 2013. Squawker Lisa and I were at the April game when Harvey outdueled Stephen Strasburg as Met fans chanted, “Harvey’s better.” And it was true, at least in 2013 when Harvey started the All-Star Game.  But Harvey was more than a rising star. He brought an attitude that announced that the Mets would no longer settle for losing.  The attitude that Tom Seaver brought in 1967 and Keith Hernandez brought in 1983.

Unfortunately, Tommy John surgery knocked out Harvey for the last part of 2013 and all of 2014.  Perhaps not coincidentally, the four straight losing seasons became six straight. But when Harvey returned in 2015, he helped the Mets get to the World Series. Harvey won a game in both the NLDS and the NLCS.  He pitched eight scoreless innings in Game 5 of the World Series and had the Mets up, 2-0.

And then Harvey, with that same attitude that had previously endeared him to Met fans, convinced Terry Collins to let him go out for the ninth.  The Mets blew the game and the Series.  And neither Harvey nor the Mets have been the same since.

There’s a fine line between confidence and arrogance. Or maybe it’s that arrogance is tolerated as long as it’s accompanied by results.  And not accompanied by partying.

It didn’t matter if Bruce Wayne was a millionaire playboy as long as he was also Batman.  Now Harvey might have a lot more time to be  a millionaire playboy than he expected. Not this year – someone will certainly pick him up.  And a change of scenery could do Harvey some good.  But pitchers do not have a good record of recovering from thoracic outlet syndrome, particularly on top of Tommy John.

Yes, Harvey needs to reinvent himself as a pitcher, but there’s no guarantees there, either.  There are a lot more pitchers whose careers were cut short by injury than ones who successfully reinvented themselves.

But will Harvey be willing to reinvent himself as a soft-tossing starter or as a reliever? Or will he be like Tebow, unwilling to give up the spotlight?  Tebow could have continued to pursue an NFL career as a tight end.  Considering what a great winning attitude everyone says he has, he might well have been a good one. But the tight end isn’t the center of attention the way the quarterback is. And if Tebow had become a fullback, well, how many current NFL fullbacks can you name?

If nothing else, Tebow is certainly getting attention wherever he goes as the Mets prioritize selling jerseys and tickets over revitalizing their sorry farm system.  And if Tebow actually makes it to the Mets, imagine what a circus that would be.  (Yet another reason to root for Mickey Callaway and Dave Eiland to successfully reboot the Mets, so the team can try to lure fans with a contending team rather than a stunt signing.)

The new brain trust couldn’t turn Harvey around.  Now we have to see what they can get out of Zack Wheeler, Steven Matz and Jason Vargas.  And it would be nice if they did not rush Jacob deGrom back from his injury scare, especially after letting him pitch after he said his arm hurt after his at bat in his last game.

And now that Sandy Alderson has gotten rid of Batman, how about finding the Mets some more bat men?

Maybe it’s time for the Mets to start playing Sinatra after games. “That’s Life” –  “riding high in April, shot down in May.”