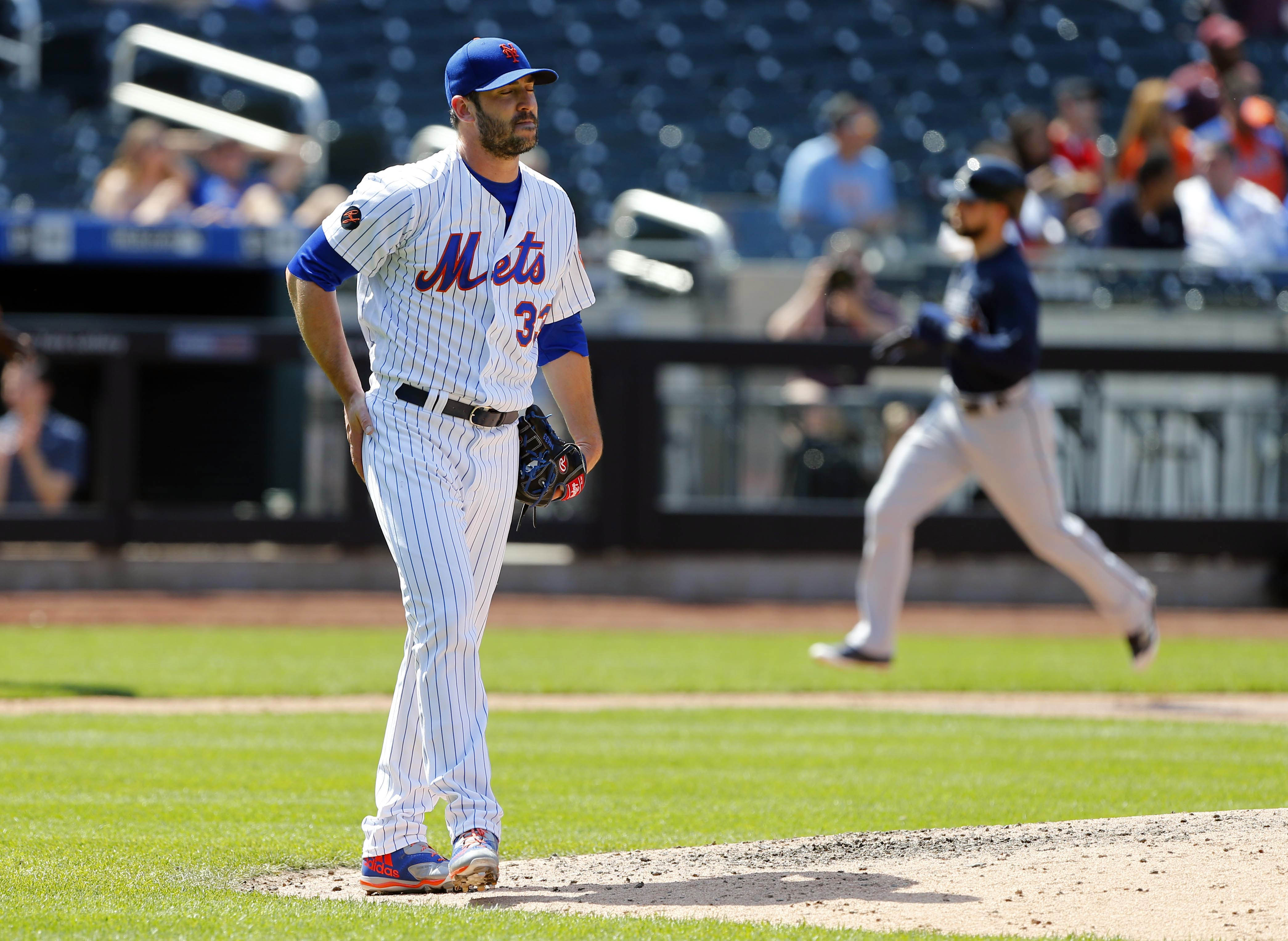 The inevitable finally happened yesterday afternoon, when the New York Mets announced they would designate former All Star Matt Harvey for assignment. Harvey, 29, has had a tremendous fall from grace over the past three years, going from The Dark Knight to a punch line thanks to a combination of injuries, poor decision making, and stubbornness. The end of the Harvey era didn’t come with a free agency departure, a video tribute to remember the good times, or even a press conference. The last memory Mets’ fans will have of Matt Harvey was when he was booed off the pitching mound on Thursday afternoon after giving up five runs in two innings of mop up work against the Atlanta Braves.

While most fans are more than ready to show Harvey the door, it’s hard to forget how quickly Harvey won their hearts when he first arrived on the big league scene in 2012. Harvey’s debut was an electric one as he struck out 11 batters in 5.1 innings in Arizona, and a star was born from there. Mets’ fans were starved for success at that point, and Harvey became a beacon of hope, with his starts becoming must see TV like Dwight Gooden’s were back in the mid 80’s. Harvey’s star continued to rise in 2013, when he put up ridiculous numbers (9-5 with a 2.27 ERA, 0.93 WHIP, and 191 strikeouts in 178.1 innings pitched) that earned him the honor of starting for the National League in the All Star Game at Citi Field. Sports Illustrated’s Tom Verducci infamously made Harvey the cover story of a May issue that year, declaring that the Dark Knight of Gotham would help lead baseball’s new pitching revolution.

At that point, Harvey could do no wrong in the eyes of the fans or the media. Remember this skit Harvey did with Jimmy Fallon?

Everything was fine until late August of that year, when Harvey needed to undergo Tommy John surgery. Mets’ fans were devastated, and the surgery was the beginning of the dissolution of the marriage between Harvey and the Mets. Pitcher and team clashed over his rehab schedule, with Harvey preferring to work in New York while the Mets wanted him to go to Port St. Lucie, like the rest of their injured players did. Harvey wanted to force his way back to the big leagues at the end of 2014, a move the Mets resisted in order to get him fully ready for 2015. The Mets privately grumbled about some of Harvey’s off the field drama, like posing for ESPN the Magazine’s Body Issue and dating supermodels, but the fan base remained firmly on the side of the star hurler.

Harvey’s return in 2015 was celebrated as he put up another good year (13-8 with a 2.71 ERA, 1.02 WHIP and 188 strikeouts in 189.1 innings pitched) to help pitch the Mets into the postseason. Another controversy arose in September, when Harvey’s agent Scott Boras leaked a story that doctors advised Harvey be shut down after 180 innings pitched in his first full season after Tommy John surgery. Harvey initially sided with his agent, forcing the Mets to handle him with kid gloves to try and save a few innings for postseason play, but he decided in late September to forego medical advice and be fully available for the Mets in October.

The decision paid off in spades for the Mets, who saw Harvey deliver a dominant postseason run (2-0 with a 3.04 ERA in four starts), including a masterful performance where he carried a shutout into the ninth inning in Game 5 of the World Series. Harvey was the unquestioned star of the baseball world that night, with Mets’ fans chanting his name as the unquestioned ace talked Terry Collins into starting the ninth. That November night was vintage Harvey at the peak of his powers, and it would turn out to be the last great moment in Harvey’s Mets’ career.

Harvey started for the Mets in the 2016 season opener, a World Series rematch with the Kansas City Royals, giving up four runs (three earned) in 5.2 innings and pitched poorly in the loss. That game was the start of a slog for Harvey in 2016 as he battled through command issues before doctors discovered that he had Thoracic Outlet Syndrome. Harvey missed the rest of the season after undergoing surgery to address the issue, but things didn’t get better in 2017, when he missed significant time with more injuries. Off the field issues also started to mount for Harvey, who was suspended for three days in May after failing to show up to the ballpark on a day he wasn’t scheduled to pitch.

The Mets nearly traded Harvey in the winter, with several teams expressing interest in him, but decided against it at the urging of new manager Mickey Callaway and pitching coach Dave Eiland. The pair have a tremendous resume of resurrecting pitchers’ careers, and Harvey appeared to buy in, pitching to more contact in spring training. Harvey’s excellent performance in camp earned him a spot in the Opening Day rotation, but once the bell rang Harvey was back to his old style, trying to overpower hitters with diminished stuff. Big league hitters began to tattoo Harvey again, earning him a demotion to the bullpen and the return of even more off field issues. Harvey refused to speak to the media after his first relief appearance, laughing at them the next day and swearing. A recent Page Six report also indicated that Harvey decided to drive from San Diego to Los Angeles during the Mets’ recent road trip to party even though the team had a game the next day. The Mets had used five pitchers in the previous game, so Harvey reasonably should have expected to pitch the following day, showcasing even more poor judgment.

Despite all of the public missteps and poor performance, its hard not to look at Harvey and wonder what could have been. Harvey got off to as electric a start as any player in franchise history, with Mets’ fans notably chanting “Harvey’s better” during an epic pitcher’s duel with Stephen Strasburg in 2013. The Mets’ turnaround really began with Harvey’s arrival since he brought a swagger with him, an attitude that saw Harvey strive for excellence and fail to accept mediocrity. Harvey even went against medical advice to pitch for the Mets in the 2015 postseason, literally putting the team ahead of his own interests at that point. No one can definitively prove that Harvey’s decision to pitch over 210 innings (including postseason play) in 2015 led to his future health issues, but it isn’t a big leap in logic to suggest that was a factor.

Matt Harvey should have been the next great Mets’ pitcher and somebody who anchored the pitching staff for years to come. Instead, the Harvey era ended with an unceremonious DFA on a Friday in May, putting him on the growing list of Mets who were robbed of reaching their full potential with Gooden, Darryl Strawberry, and David Wright among others. When Jacob deGrom hyperextended his elbow earlier this week, WFAN’s Evan Roberts said on air that the Mets simply can’t have nice things for a long time. That statement is the perfect embodiment of Matt Harvey’s Mets’ career. Harvey’s star burned brightly and it went out far too soon.