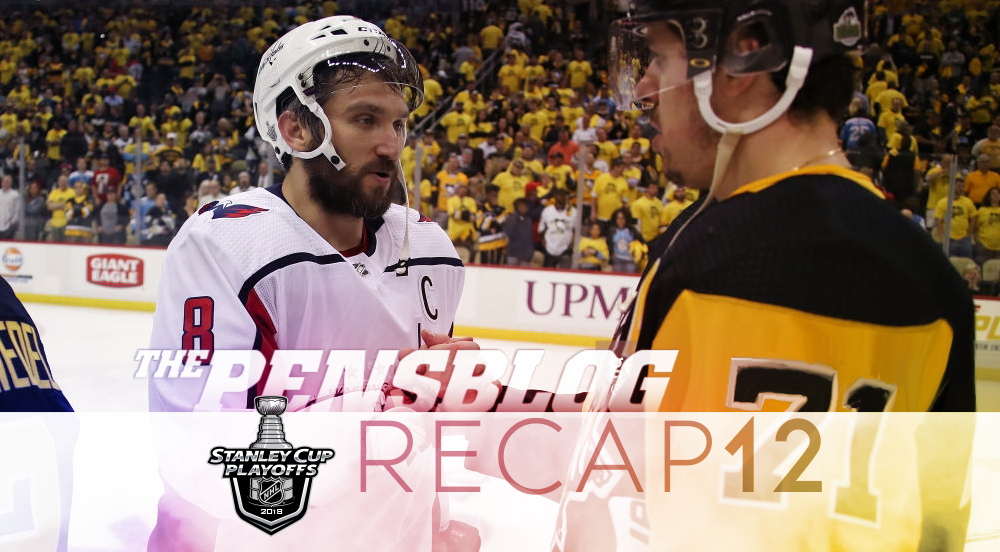 Turns out the Penguins can’t win Stanley Cups forever. Nope, these guys are human, after all, and winning three Cups in a row is still actually pretty hard. Last night was a harsh reminder that winning Cups isn’t as easy as this team made it look. So it turns out that the ride did have to stop at some point and, man, now that it’s over, just getting one, let alone the back-to-back Cups, was a hell of a run.

Turns out, too, that the Pens couldn’t eliminate the Caps from playoff contention forever. And hats off to the Capitals — they starred down that barrel before and this time they were able to get it done. Part of all this makes it too easy to want to pull for Ovechkin to finally get that Cup that has eluded him — he’s an amazing player and honestly deserves to have his name on that thing — but then you remember Caps fans are the absolute worst people on the planet and that feeling sort of goes away. Every coin has a flip side.

Anyways, this day is going to be a weird one. We all kind of forgot what being a fan of an eliminated teams feels like. It’s pretty awkward right now but it’s probably going to at least subside a little in a week or so — depending upon if Tampa beats the Caps in four or five.

But maybe we should have seen this coming. Hindsight being what it is, the Penguins didn’t have a great offseason. That translated into a sub par start to the regular season, which eventually led to GMJR scrambling to make some trades that didn’t exactly pan out in the end. Still, we all held on to hope that somehow, someway, the core of this team could overcome all of that and pull it all together when it really mattered. We saw it so many times before, we had to believe. We were wrong.

In the end, attrition won out. The path to a third consecutive Stanley Cup was a little too steep for a group that has been climbing the mountain for the better part of the last two years.

694 days ago, the Penguins beat the Sharks in Game 6. What an unbelievable run of being on top, @penguins. Thank you for all of it.

It had been 1,109 days since the Pens lost a playoff series. In that span, babies have been born, learned to walk, learned to talk, and are now writing Facebook comments about last night’s loss on their iPads. Pretty wild, if you think about it.

So what now? If we’re lucky, not much. This is still a pretty good team. They still have two of the best centers in the world and another who is somewhere in the top ten (it didn’t look like it, but Brassard is still good), the have forward depth, an elite goaltender, and the best coach in the business. Some rest and some retooling is in order, no question, but there is no reason to believe the Pens won’t be knocking on the door again this time next year. Unless you’re Ron Cook and function like someone who constantly needs their diaper changed, there really isn’t too much to be jammed up about. So the Penguins didn’t make history and three-peat? Neither has any other team for the last 35 years. Grow up.

Neither team wanted to give an inch in the early going and the entire first period was like driving through the first snowstorm of winter with bald tires. Clinched buttholes everywhere. Things eventually started to open up and the Caps were getting the better of the chances. If you’ve been around hockey long enough, you knew the optics. The Caps were just a step quicker and were winning more puck battles than not. The signs — they were, they were not good.

Evgeny Kuznetsov is an IDIOT for not shooting this right away. Now let's all thank him for having shit for brains. pic.twitter.com/JZv1FOnGVV

Two minutes into the second and the Caps finally broke through. Alex Chiasson sucks. He’s probably the Caps’ worst player and five years passing between playoff goals for him is all the data you need to confirm that. But he was able to hammer one past Murray to get Washington on the board.

Nathan Walker gets the helper on Alex Chiasson's tally!

Murray probably wants that one back. Doesn’t mean Fleury is better.

Ten minutes later, the Pens evened it up.

Letang, man. What a polarizing player. The guy can make nine plays that nobody else on the ice could make and but the tenth that gives up a goal will be one that your kid in peewee could have made. Sort of reminds me of Scarecrow from Wizard of Oz… if he only had a brain.

Things tightened back up but it wouldn’t be long before the Caps would start knocking again. But Money Matt had his shit together and kept slamming the door.

Matt Murray responds with a huge save on Vrana on the breakaway. pic.twitter.com/IYvHgPpFR3

The game went to the third tied at one and after exactly zero OT games all postseason, you knew the writing was on the wall.

Both teams traded chances in the third…

So damn close to taking the lead. pic.twitter.com/d0aKpADwdJ

But that was all a formality. This one was meant for OT and to OT she went.

Six minutes in, Kuznetsov found a lane through the Pens defense, and once the puck was on his stick, you just kind of knew…

Hate to harp on Letang, but no idea why he’s skating to the Allegheny River there. Dreadful positioning that gave Kuznetsov enough space to drive a truck in on Murray. Have to call it like you see it.

#Pens get a standing ovation leaving the ice pic.twitter.com/BQgowQ6vOp

At the end of the day, the best team won the series. Give credit where it is due. In years past, the Pens had the resiliency and drive to overcome in situations like the one they were in against the Caps. Last night, they just didn’t. The tank was empty. The well, it was dry.

It sucks right now, but damn do we have a lot of gratitude to give. Three years ago, this team rose like the Undertaker to start a run that nobody saw coming. Hockey became fun again and, collectively, we can’t show this team enough appreciation for that.

So thank you, Penguins, for the last three seasons of incredible hockey. It was a lot of fun. Now you can rest.