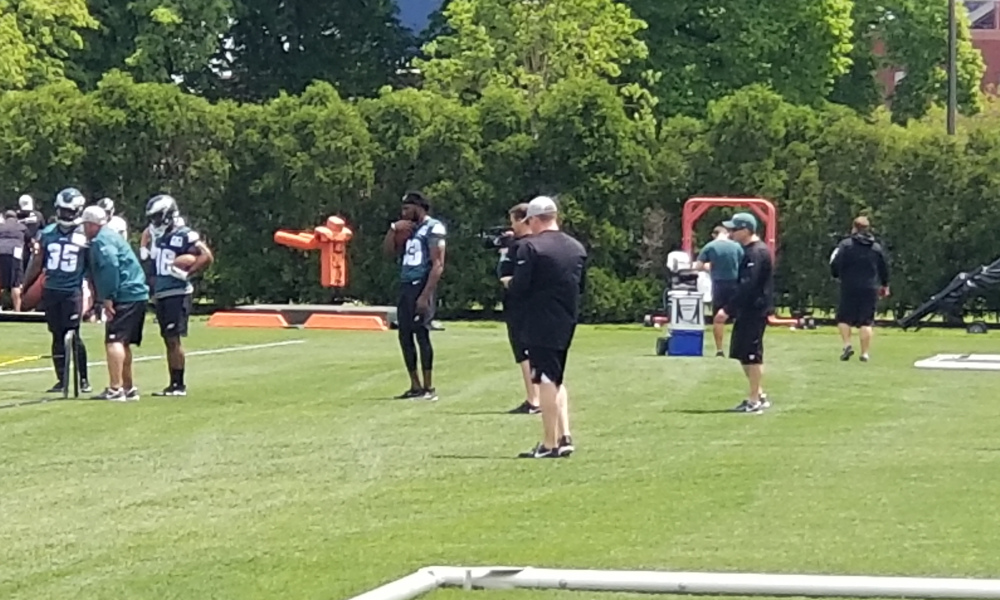 Funny but I was just looking back at the last article I wrote for MVN.com in 2010 before being traded to Bloguin.com…It was January 10 and the Eagles had just been trashed down in Dallas by the Cowboys in a game where McNabb was awful (and awfully abused by lack of protection from a deteriorating offensive line)…They put Jerry Jones’ live video picture up on the JumboTron laughing with his family and mates at the end of the game. It was a surreal experience of losing in the most humiliating of circumstances. Less than 3 months later, McNabb was traded to the Redskins.

I remember thinking we will draft some new players to compensate for the humiliation and for the demise of our franchise QB. Rookie camp couldn’t come soon enough.

Welp. it didn’t exactly go textbook on my wishes…but here we are, a mere 8 years later (not a long time in Eagles fan life), and now it is we who are sitting on high and contemplating a rookie class which will help keep us on top instead of getting us over the vile obstacle of divisional teams like Dallas who once ridiculed us.

Positive thinking…that’s the main thing about rookie camps—you get to know these young guys personally instead of just observing their scouting tapes. Nothing really rings true until the pads go on in late July, but the coaches get a sense now of what they’ve actually got to work with.

You get to observe first-hand the fluidity of motion, the mindsets of the young candidates, the enthusiasm which they bring to practice. You get to see how the young guys adapt to limited drills based upon snippets of the Eagles playbook.

5 drafted rookies and 15 undrafted rookies… It’s a great opportunity for the coaching staff to look down the road and project which of these guys can develop into the kind of players who might short-circuit the too-quick demise of a winning franchise such as what happened at the end of the McNabb era.

Turron Davenport of EaglesWire offers us these initial observations of Eagles rookie camp:

“On a beautiful day that was perfect for football, Eagles rookies took to the field Friday for the first time. After addressing the media in his opening press conference, Pederson led the team onto the field for the first day of rookie minicamp.

-Running back Josh Adams did not take part in practice. He stood by running backs coach Duce Staley while the other running backs worked the ropes and went through other drills. Adams has a hairline fracture in his foot, according to Philly.com’s Jeff McLane.

-Tight end Dallas Goedert had a couple of passes bounce off of his hands, but that shouldn’t be of any worry. It was his first practice as a pro, so nerves probably got the best of him.

–Defensive end Josh Sweat is listed at 6 feet 5, 251 pounds. In person, his body seems a lot longer and leaner. Sweat was on the field without a knee brace on, which is a good sign considering there were so many questions about his knee during the draft process.

-Cornerback Avonte Maddox appears even quicker in person than he does on film. A compact athlete, Maddox looked very quick as he weaved through bag drills and closed on the football.

-Jordan Mailata will have a lot of work to do and definitely has the attention of the coaches. Offensive line coach Jeff Stoutland and assistant offensive line coach Eugene Chung coached him hard on the first day. Stoutland even had the group start the drill over when he didn’t like the way Mailata stopped. To Mailata’s credit, he got better with each rep and started to move smoothly as they worked on mirroring defensive linemen.

-New wide receivers coach Gunter Brewer used drills similar to the ones that his predecessor Mike Groh employed last year. He was very vocal with the wideouts and seems to have a no-nonsense style.”

According to Davenport, here are the main things you and I should be looking for out of this rookie camp experience:

Goedert is known for his ability to run routes efficiently from the traditional in-line tight end position as well as flexed in the slot or out wide. The coaching staff will want to see how well he is able to get in and out of breaks as well as how quickly he can grasp basic route concepts from the offense.

The former South Dakota State tight end impressed Eagles tight ends coach Justin Peelle with his football IQ when they met during the draft process. Now Peelle has a chance to get his hands on him and work with him.

The fact that Sweat dropped to the fourth round of the 2018 NFL Draft shows that some other teams may not have been as sure about his medical evaluation as the Eagles are. Executive VP of football operations Howie Roseman said all of the medicals checked out fine for Sweat. He also passed the evaluations at the NFL combine in March.

Sweat was impressive at the combine, as shown by his 39.5-inch vertical and 1.53-second 10-yard split to start his 40-yard dash. More importantly, the Eagles will need to see how Sweat responds to actual practice. Evaluating how Sweat can use his speed and explosiveness coming off the edge will be one of the primary goals of the coaching staff.

Seeing a 6-foot-8, 346-pound man move the way Mailata does in his rugby highlight video would generate interest from just about any coaching staff. Mailata said he has to learn to harness his explosiveness as he attempts to learn how to play on the offensive line.

Eagles offensive line coach Jeff Stoutland has gotten to work with Mailata in spurts leading up to the draft. Now he will get to work with him for a full practice.

This will be the first chance for Mailata to get acclimated to the techniques that Stoutland and the Eagles teach. How Mailata adjusts will be one of the things to watch closely.

Safety Jeremy Reaves was an impressive player at South Alabama and the Senior Bowl.

Watching how he moves in coverage and the angles he takes to the football is something that coaches can do regardless of whether he has pads on. He is an aggressive player that as a safety can be a leader in practice.

Running back Josh Adams is another player to watch. The local product from Notre Dame by way of Warrington, Pa., was one of the first undrafted players to sign with Philadelphia. Assistant head coach and running backs coach Duce Staley will get his first opportunity to see Adams’ work ethic in practice and how he responds to coaching. [Of course, the hairline fracture in Adams’ foot kinda changes the whole dynamic there…he may have to be hidden on the Injured Reserve list for the rest of the summer.]

Not only will there be new players at rookie minicamp, but there will also be a new coach as well. New wide receivers coach Gunter Brewer was brought in to replace Mike Groh, who was promoted to offensive coordinator.

Brewer worked with Mack Hollins at North Carolina. It will be interesting seeing how Brewer coaches the wideouts along with what drills he has them take part in during individual portions of practice.

Groh will be in a new role as offensive coordinator. How he goes about conducting practice with the help of Doug Pederson will be something else to note.