The Extremes of Goaltending: Edmonton Edition 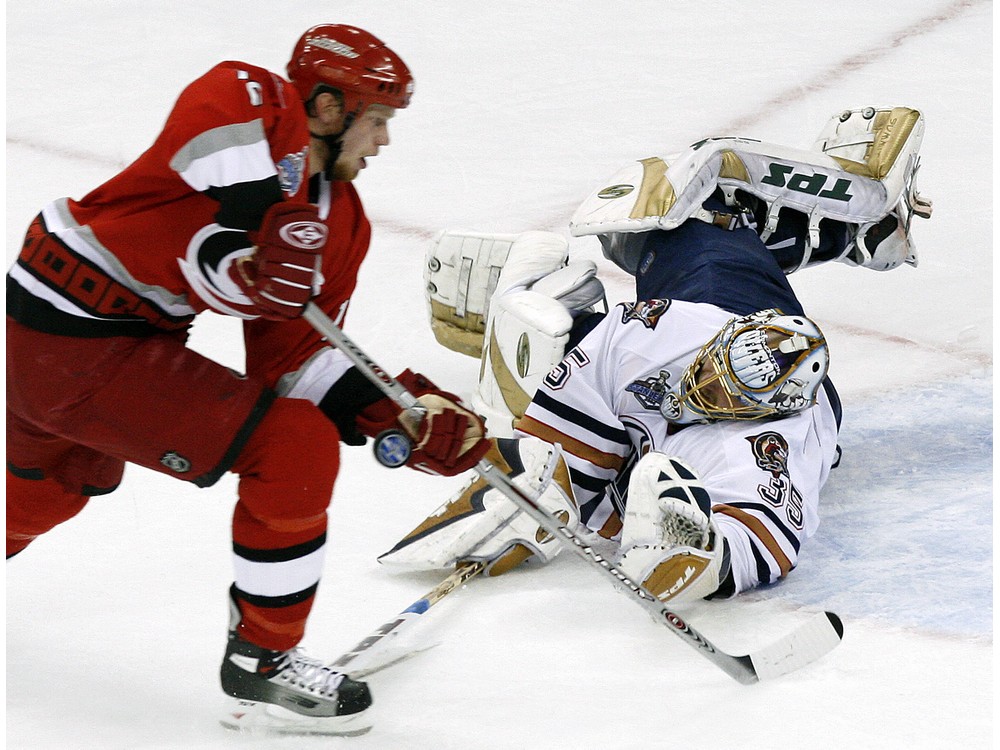 The Extremes of Goaltending: Edmonton Edition

Last night was one of the most memorable hockey games I’ve ever had the privilege of watching (& working). QUINTUPLE OT. 148 combined shots on goal. Over 6 hours, breaking the record for the longest AHL game. Although we didn’t come out on top, it was one hell of a marathon. pic.twitter.com/solI7W5ClR

On Wednesday night and early Thursday morning, Charlotte was the location for the longest AHL game take place with the Lehigh Valley Phantoms knocking off the Charlotte Checkers in a FIVE OT PLAYOFF GAME 2-1!

The numbers are stunning, a six-hour game with 148 combined shots and the Phantoms Alex Lyon in a winning effort made 94 saves. Nine, and then a four. Alex, if you’re a reader of the Oilers Rig, I want to commend you for the effort but also do you have any remaining groin muscle left?

With this performance in the AHL lets take a look back at some of the more memorable postseason games in which Oiler goalies stood strong in marathon playoff games.

When you get into multiple OTs the save numbers start getting into the territory known as wacky, and that territory contained members of the Edmonton Oilers and Anaheim Ducks.

We really shouldn’t have reached this point as the Oilers blew a 3-0 lead in Game 5 of their Western Conference Semifinal matchup with five minutes to go in this game with Rickard Rakell tying the game up with 15 seconds to go in regulation.

The final dagger came to the visitors when Corey Perry early in double OT would end things that would take a ton of wind out of the Oilers sails for the rest of the series leading to a Game 7 Ducks win.

There was something lost in the game and that was Cam Talbot setting a new Oilers record for saves in a game as he put up 60 on 64 shots.

Yes, this was a tough loss but this was a game that truly showed how much Talbot was going to claw and scrap in between those pipes to give his team a chance to get the W and push forward for a shot at Lord Stanley’s Cup.

Roli The Goalie Stands on His Head

To say that Dwayne Roloson was en feugo during the 2006 playoffs for the Oilers would be one heck of an understatement.

In his very first playoff game with the Copper and Blue he put on a goaltending clinic with a then-franchise record 54 saves in a Double OT loss on the road to the Detroit Red Wings in Game 1 of the Western Conference Quarterfinals.  The series between the #8 seed Oilers and the President’s Trophy and star-studded Wings should have been a walk for Detroit, but it was anything but that (Detroit outshot the Oilers 57-25 in Game 1).

Roloson and Co would stun the Wings in six games, a team that had Steve Yzerman, Brendan Shanahan, Nicklas Lidstrom, Chris Chelios, Pavel Datsyuk and Henrik Zetterberg….seriously, this was one of the greatest upsets in NHL playoff history.

Game 1 would only be a warmup for the 2nd Double OT game of the series that would this time see the Oilers get the win but also Roloson would put up 44 saves in the victory.

In those 2006 playoffs, the graduate of UMass-Lowell would lead the league in playoff saves, be tied with Cristobal Huet for the 2nd best GAA during the postseason (2.33 GAA) and put up a save percentage of .927%

Dwayne’s run was one that deserved a much better ending but why do we need to get into what happened during the Cup finals and cry ourselves to sleep?

Ranford Comes Up Big At The Garden

Game 1 of the 1990 Stanley Cup Final is known for its length and Petr Klima’s Triple OT winner, what it should also be known for a little more is Bill Ranford’s 52 save performance.

Through the 1989-90 season, Ranford held down the fort as the man being thrust into the starter’s role due to Grant Fuhr missing most of the season due to injury as he’d put up a 24-16-9 mark in 54 starts.

In the playoffs, Ranford would turn things up with a 16-6 mark and 2.53 GAA on route to winning the Conn Smythe Trophy.

The effort in Game 1 vs the Boston Bruins was incredible as both Ray Bourque and Cam Neely had almost 10 shots each in the game for Boston, but beating Ranford more than once was something #77 and #8 just could not do.

To be honest, if I had to spend six periods facing those two firing shots on me I’d probably pack up my gear and hop the first flight back to Edmonton, Bill was a far stronger man than I would have been in that situation.

With Ranford doing his part, the guys up front would do theirs to end things on 150 Causeway Street.

Oiler goalies over the years have had to endure marathon games but will we ever get a game in which they put up a 94 save performance? Never say never but I’ll probably be passed out at home or passed out in the press box if it happens.