Your Morning Dump... Where LeBron has zero concern 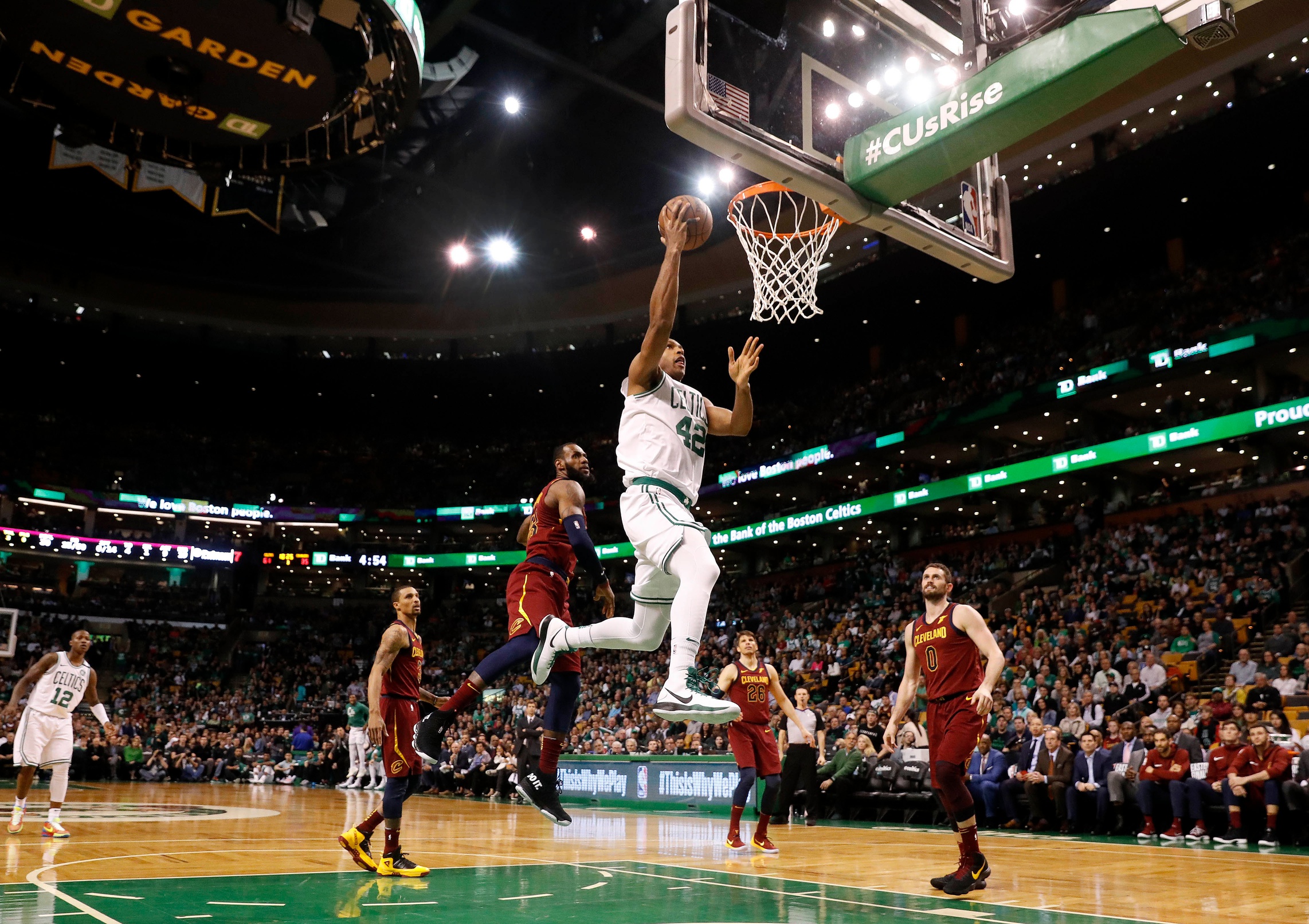 Your Morning Dump... Where LeBron has zero concern

“I have zero level of concern at this stage,” James said.

“I didn’t go to college. So it’s not March Madness. You get better throughout the series. I’ve been down 0-1, I’ve been down 0-2. I’ve been down before in the postseason. For me there’s no level of concern no matter how bad I played tonight. Seven turnovers. How inefficient I was shooting the ball. I’m just as confident going into a series whether it’s a 0-0 series or I’m down 0-1. We had an opportunity to be better as a ball club Tuesday night and we’ll see what happens.”

“Just one bad game,” said Kyle Korver. “Bad first game, there’s lots of things we need to do better for the next one.”

“Tonight felt a lot like Game 1 in the quarterfinals,” said Kevin Love, referring to the Cavaliers’ loss to the Pacers.

A blowout win in the first game of a series isn’t always a 100% positive thing.

The Cavs just spent four relatively easy games getting very little fight from a Toronto team that, frankly, has some kind of mental block when facing LeBron James and Cleveland.

Where the Raptors shrunk in key moments, the Celtics came out and were the aggressors. They took control early and, save for a run at the end of the third quarter, never ceded control of their lead.

So let’s all take a moment to reset our expectations heading into tomorrow, because there is a significant possibility that this game will be very different from Game 1. The Cavaliers can now re-calibrate themselves and prepare for Game 2

“I’ve seen every (defensive) coverage,” James said. “For me, Game 1 has always been a feel out game if you follow my history. I got a good sense of the way they played me today and how I’ll play heading into Game 2.”

What can LeBron do? I’m sure the Cavs will make some lineup adjustments to make the Celtics play differently.

One potential change would be putting Tristan Thompson in to punish the Celtics on the boards.

Another would be to try to match the Celtics youth and athleticism by giving Larry Nance, Jr. and Cedi Osman minutes.

Couple either of these with a much more aggressive LeBron James (he has to be more aggressive, right?) and the Cavaliers will find some kind of offensive groove. They’ll almost definitely shoot better moving forward, which means the Celtics will have to find ways to counter on their own.

I’m not trying to piss on people’s parades here, but this was only Game 1, and the Celtics, for all their amazing work these playoffs, aren’t good enough to relax in any series. Every time they’ve gone off into “hey look how good we are” mode, they get roasted.

This Celtics team is playing extraordinarily well and it may have found a formula for winning this series. As I’ve said, the non-LeBron matchups in this series work in their favor. The Cavs defense can’t stop anyone  the perimeter, so the Celtics will get the paint touches they emphasize.

(We get into this in the latest Locked On Celtics podcast. You’ll hear Brad Stevens emphasize how important it is. Listen below)

I still believe the Celtics can win this series in six games. They can’t, though, if they spend today feeling like they accomplished something.

They didn’t. They won a home game in the playoffs. As Brad Stevens said after the game, they have to play a lot better in Game 2 because Cleveland almost certainly will.

Page 2: Everyone is showering praise on Mook

Morris backed up his words and it seemed the Celtics desperately needed to win Game 1 to make a statement in this series. And perhaps Morris public indication that he wasn’t intimidated by James in his first taste of a Celtics vs. LeBron playoff series inspired his teammates and himself.

“It’s a team effort, man, it’s not just me,” Morris said. “Everybody played a part in guarding him. He’s obviously the best player in the game and you need multiple guys and team to guard him. I just think we did a great job of that.

Globe: Marcus Morris talked the talk then walked the walk

“I thought they had great game plan Game 1,” James said. “[Morris] was the start of it. He was my matchup, and I think they did a great job of communicating throughout the whole game, knowing where I was and knowing where our teammates was.

“[Celtics coach] Brad [Stevens] and the coaching staff did a great job in Game 1. You commend that. We have an opportunity to look at a lot of film tomorrow and see ways they were making us uncomfortable, making myself off-balance and not have a rhythm all game. So we’ll be much better in Game 2.”

ESPN Boston: Celtics’ Morris bottles up LeBron to back up talk

Asked about having the gall to say he was looking forward to the matchup, Morris said, “Because I’m a competitor. He’s the best player, you know? I’m going to be able to tell my kids this one day. It’s exciting, I love the challenge, but like I said, man, it’s a team effort.”

Herald: Celtics’ Morris bottles up LeBron to back up talk

I expect the Cavs to try to minimize this matchup however they can. This could be another reason to start Thompson.

I don’t think they’d put Thompson in for Love. I think they’d go big and put him in for JR Smith. A lineup of George Hill, Kyle Korver, LeBron James, Kevin Love, and Tristan Thompson could force the Celtics to make some decisions… and move an offensive matchup problem to the bench.

Would the Celtics start Baynes in this situation? If they did and the wanted Marcus Morris to stick to LeBron, then either Jayson Tatum or Jaylen Brown move to the bench.

They could keep Baynes on the bench and try the Thompson/Horford matchup with Jaylen’s strength on Love, Morris on LeBron, and Tatum on Korver.

That’s a risk, defensively, because Thompson has historically had an advantage in that situation. At the same time, though, the Celtics are far too athletic for that Cavs lineup offensively and it could end up working out in Boston’s favor.

Either way I don’t think the Celtics are going to go away from the Mook/LeBron matchup. They’re going to ride that one until it doesn’t work and then adjust. If the Celtics have to bring a Jay off the bench, then that might still work out because the Cavs bench isn’t equipped to stop either one of those guys.

All of this just means Morris has done a good enough job on LeBron to start this series that it could factor into the Cavs adjustments. I’m very interested what LeBron tells Ty Lue to do in this situation.

… don’t we think people are getting a little too caught up in LeBron remembering how a 7-0 fourth quarter run went?

LeBron’s photographic memory has been long documented. We all should know he has it. Frankly, this is the least impressive way to display it. A lot of people watched that game and can recall how that sequence went.

The impressive thing about LeBron is that he’ll be able to recall that sequence when he’s 70 and he’s asked “hey, remember that quick 7-0 run when you realized ‘yeah I can’t play with these guys anymore’ and decided to leave Cleveland again?”

What people are overlooking is that it was a kind of dickish answer to the question of “what happened during the 7-0 run?” The Cavs had cut the lead to 14 going into the 4th quarter and they immediately collapsed on themselves at a point where it could have been turned into a tight game.

LeBron was asked what happened and he, instead of answering the question, just literally listed what happened. Yeah, it was a cute flexing of his recall… it was also a dismissive non-answer to a direct question.

ESPN Boston: Cavs lament another 1-0 playoff series deficit  |  Al Horford finally has his way with the Cavaliers  |  Celtics’ early burst leads to Game 1 rout of LeBron and the Cavs

NBCSN: Blakely: Celtics bring out the worst in LeBron James  |  Marcus Smart gets mixed emotions for Mother’s Day, Game 1  |  Stars, studs and duds: Jaylen Brown may have enjoyed his best playoff game ever

Globe: Here’s what the Celtics had to say after Game 1  |  Al Horford’s critics are wrong, and Game 1 thoughts  |  Celtics message to Cavs: This year will be different

The Athletic: Kendrick Perkins back in Boston with small role for Cavs  |  Here’s what the Celtics did to shut down the Cavs  |  Celtics show LeBron they don’t care about underdog label

BSJ: Robb: Brad Stevens may have found a winning strategy against LeBron James

ProJo: Celtics Journal: Horford stepping up his game in the playoffs