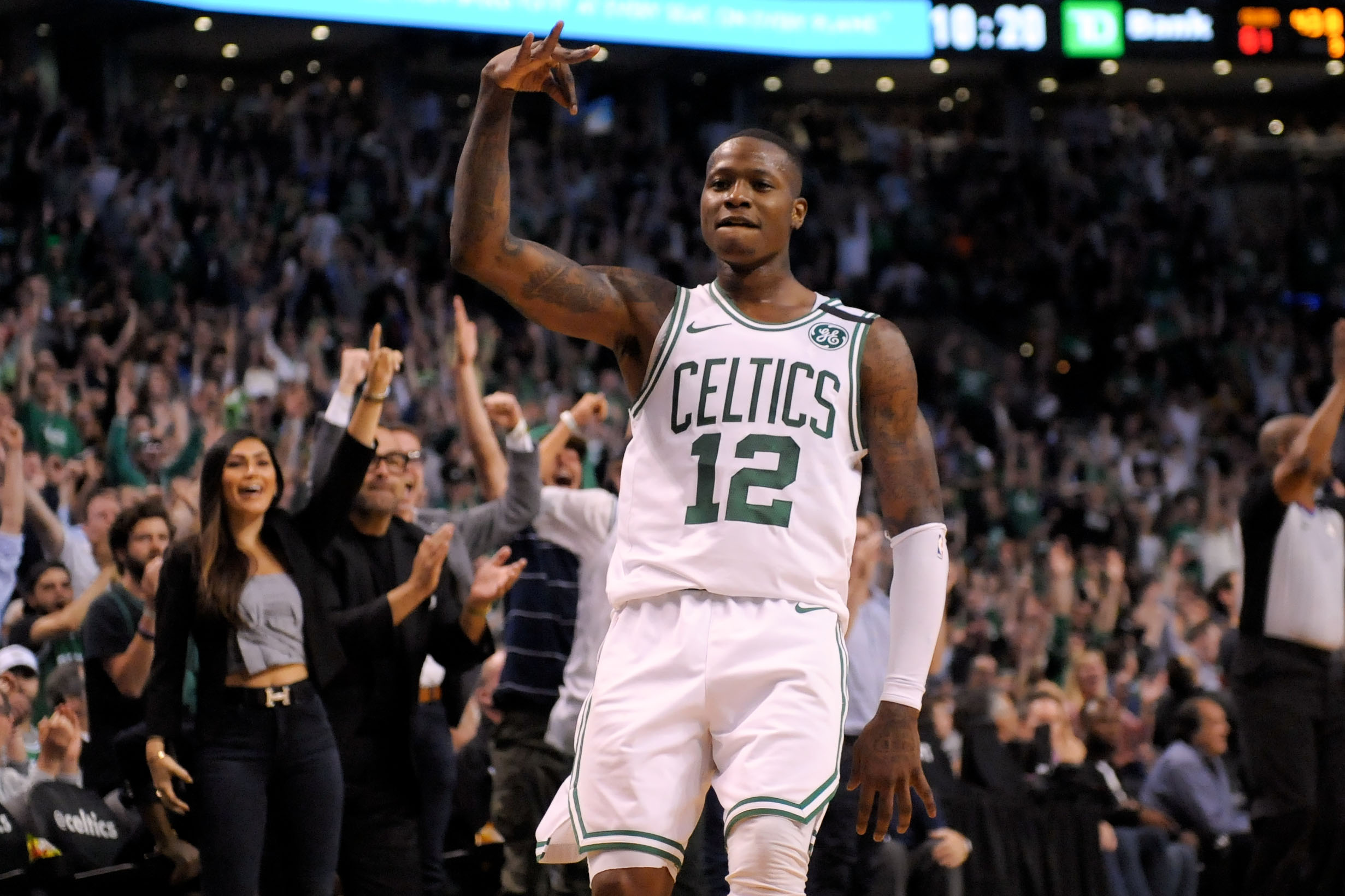 “So, LeBron is going to get his 40 points- who cares?! As long as we can shut down the rest of his team, we got this. We’re at home!”
-Every Celtics fan before Game 2

After leading for all but six minutes during the first game, the Celtics knew they’d take the Cavs best punch in the second game of the series on Tuesday night.

Sure enough, LeBron played as well as we expected- he dropped a triple double and finished with nearly half of his team’s points- but only one other Cavs player reached 20 points (Love), and the Boston Celtics ultimately relied on another team effort to remain undefeated during the playoffs on their parquet floor.

Two players put everyone on notice right from the opening tip: LeBron James and Jaylen Brown.

LeBron looked damn near unstoppable as he consistently and ferociously finished at the rim. He even did his best to silence the Garden crowd via the deep ball, but his hot start was ultimately short-lived and insufficient. The Celtics and their fans were expected this gut punch, and they responded appropriately. Boston’s maturity (or lack of immaturity, which should be expected given their age) was particularly impressive tonight, as they reacted like a veteran team that was prepared to take Cleveland’s best shot then punched back.

Without Jaylen Brown’s aggressive first quarter this game would have been over within the first twelve minutes. Immediately following the tip, JB utilized a screen and drilled a 3 to give Boston their only lead of the first half. He’s told us that he doesn’t like to play with his food, and tonight my man sure looked HUNGRY. Boston continued to feed JB and in the end Al Horford and Aron Baynes were the only other Celtics to score in the first quarter aside from him. In fact, LeBron and Jaylen combined to score 35 (or 70%) of the teams’ 50 total first quarter points. (NBA History Note: LeBron’s 21 points is tied for the most he’s had in any quarter in playoff history) The Cavs had the lead heading into the second quarter, 27-23.

The game turned physical in the second quarter when Aron Baynes and Larry Nance Jr. started wrestling for a ball and ignored the jump call. The pair eventually found themselves rolling around on the ground in a struggle, and things could have got ugly from here, but when both men had smiles on their faces when they stood up- at least for now (if there’s one thing this series was missing, it was choppiness- but more on that later).

The Celtics fell down by 9 just a few minutes into the second quarter, at which point Stevens decided Horford had enough rest and put the big man back in the game. The vet had yet to make much of an impact offensively but continued to be a vital piece in the Celtics stellar team defense.

As for everyone’s favorite rookie, Jayson Tatum’s first field goal of the game came halfway through the second when he made a pretty move through the lane and dropped in his patented scoop-n-score at the rim. That was the first of 9 straight points for the rook, as he and the Cavs Kyle Korver exchanged blows for much of Q2. One particularly pretty fall-away is posted below:

Marcus Smart had a classic Smart play in which he accidentally threw the ball up in the air as he was (apparently?) going for a 3, then decided to stop mid-launch. The ball went flying up much like it would in a video game, but he quickly followed that with a couple of CLUTCH assists that brought Boston back within a couple of possessions. The assist posted below was to Marcus Morris, who’d score 6 straight points for the Celtics at the end of half. The score was 55-48, Cavs, going into the third quarter.

It seemed like each quarter was a different Celtics player’s turn to wake up, and the third was Rozier’s. It started with the announcers curse, of course, as one of those jamoke’s mentioned how quiet he had been up until that point of the game. Scary Terry kicked it into high gear and quickly; scored 7 straight points to give Boston the lead once more.

The Celtics ultimately turned it around in the third quarter thanks to lockdown defense that forced turnover after turnover from the Cavs. Boston converted a total of 10 fast break points during Q3. The catalysts were the usual suspects: Marcus Smart and Al Horford; but Marcus Morris deserves a nod, as well.

The trio were in the Cavs head on defense, and they started converting on offense during the quarter as well. Here Marcus Morris finished at the basket plus the foul, and his celebration following the shot somehow ended with both him and Thompson receiving techs. So, kudos to Marcus, I guess? He got to at least yell in someone’s face after scoring on them- that’s a net positive.

If it seems that it’s been a while since I’ve mentioned LeBron or Jaylen, that’s because they went virtually invisible following the first quarter. After starting with 21 points, LeBron ended the half with just 25 points and remained mostly quiet for the third quarter. Jaylen, likewise, scored 14 early points then added just 6 more over the course of the second and third quarter.

Excuses? They got ’em!

Some people pointed to LeBron’s collision with Tatum’s shoulder at the end of the second quarter, which briefly sent him to the locker room, as the reason he briefly disappeared. This excuse doesn’t explain the ENTIRE second quarter prior to his collision, though (which occurred just minutes before halftime).

As far as Jaylen’s excuse for his dwindling performance- yes, he hurt his hamstring mere weeks ago. Yes, he was grabbing his leg and he definitely doesn’t seem to have the same explosiveness out there. He might be hurting.. but he’s out there, people! Both of these men know that if you’re on the court then your best is expected- that’s just how it is.

Back to the action on the court: While LeBron went quiet for two quarters, Love did his part by coming alive. According to ESPN’s broadcast, 11 of Love’s 20 points came in the third quarter, and he brought a double-double in rebounds with him into the fourth. He couldn’t do it alone, though, and the Celtics incredible run in the third resulted in a 14 point swing and gave the home team a healthy lead, 84-77, heading into the final quarter.

A Marcus Smart steal started the fourth and essentially confirmed the Cavs worst fear: the Celtics were coming for that ass, Larry. As previously mentioned, Smart’s passing skills were on full display tonight, and his 9th dime put the C’s up 11 in the fourth quarter.

Boston’s Human-Bull-Dog also showed he’s- in the infamous words of Terry Rozier- “with the shits” after the game got REAL chippy in the final minutes. Clearly frustrated, JR Smith pushed Al Horford in the back as he reached high for an alley-oop, so Smart immediately ran to defend his teammate and confront JR.  It was a blatant cheap shot from a player with a dirty past.  Both benches cleared but no punches were thrown, so look for subtle revenge coming from Marcus Smart through out the series. This wasn’t just “Playoff Stuff”- it was dirty.

Marcus Smart was ready to throw #ThemHands after JR Smith pushed Al Horford from behind 😬 (via @DefPenHoops) pic.twitter.com/KLczyvM32m

It made sense why JR was angry- the Cavs were about to go down 0-2 despite having their self-appointed “King” go off.

Unlike Game 1, Cleveland did remain within shouting distance through out the game tonight, but the Celtics were ready to answer with otherworldly effort on both ends of the floor. Whenever the Cavs came knocking, the C’s answered by outworking them in every facet of the game.

The icing on tonight’s cake came at the end of regulation: Al Horford drilled a DEEP two to give Boston their largest lead of the night at that point, and then led the fast break after stealing the Cavs pass on the next possession. Ho hum. No big deal. Just your average, game-clinching plays to give his team the 2-0 series lead. Horford racked up 15 points, 10 rebounds, 4 assists, and 2 steals during his team’s 107-94 win.

Jay-Tay seen here warming up. He’d have a hot quarter, but not much else tonight on the offensive end. He finished with 11 points while grabbing 3 rebounds and dishing a couple of dimes. Luckily, Boston didn’t need him much tonight and will hope that the couple days of rest does him good before Game 3.

Al Horford continues to shine in all aspects of the game. Earlier in the season we were told that his teammates know to run to the hoop whenever he has the ball inside the arc because they know he’ll feed the open man and it’ll be an easy 2 – Jaylen clearly had that in mind here. JB finished with 23 points, 7 rebounds, 3 assists after a fiery start that kept his team in this game.

Smart finished with 11 points, 9 assists, 5 rebounds, and 4 steals in another Monster-Marcus game.