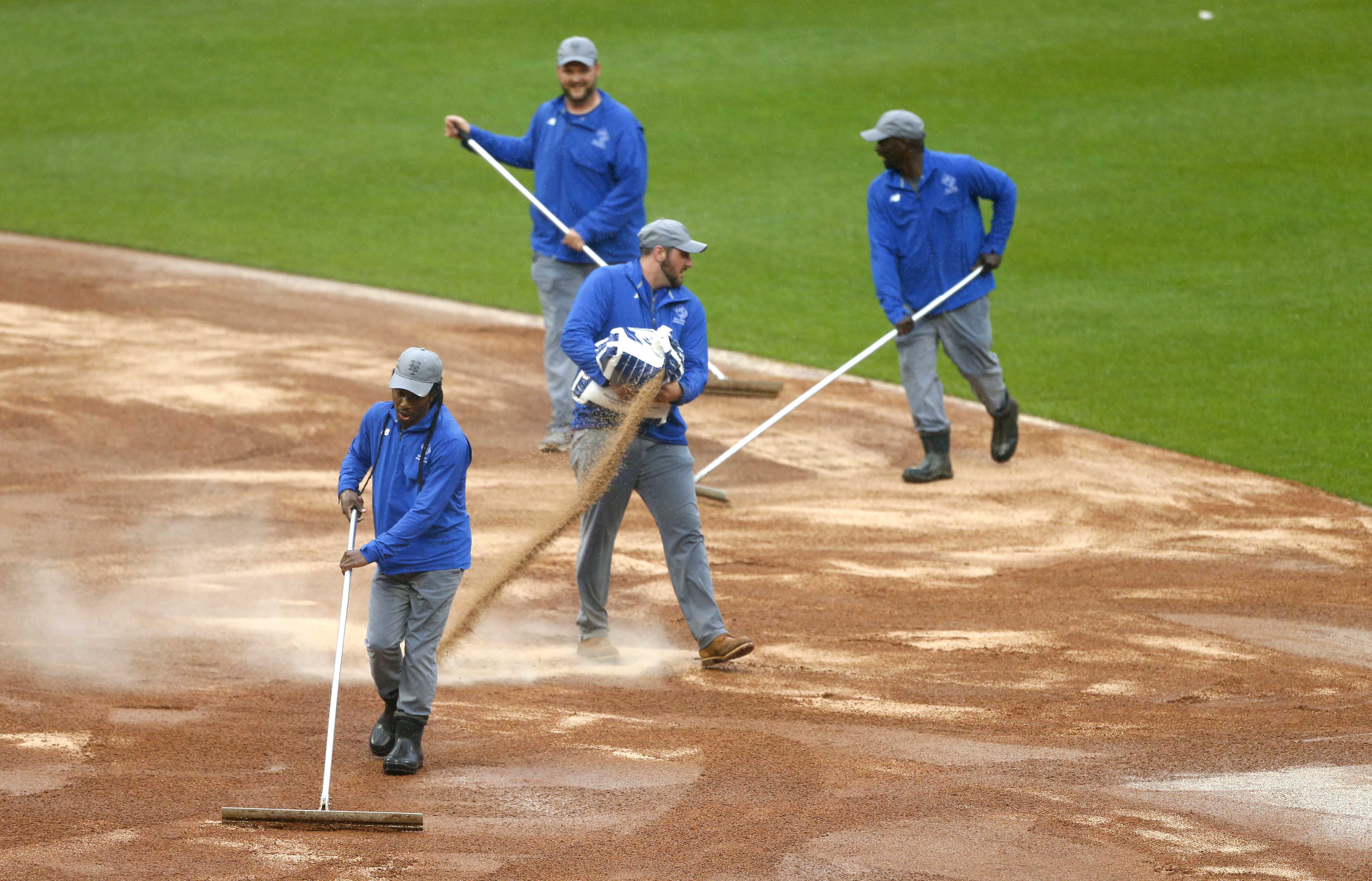 If you had the misfortune of having a ticket to yesterday’s game between the New York Mets and Toronto Blue Jays out at Citi Field, it was certainly an unpleasant experience. The Mets got absolutely destroyed by the Blue Jays, losing 12-1 as they failed to win consecutive games for yet another time, but the story of this game was how ridiculous the field conditions got. It rained pretty much all day, including a straight up down pour in the third inning, but the game was never stopped. There were several lengthy delays as the Mets’ ground crew, seen hard at work below, did what they could to make the field playable.

The game should never have been played due to the adverse weather conditions, but the teams pressed on due to the insanity of the MLB schedule.  Major League Baseball scheduled the only meetings between the two teams at Citi Field in May, so the options were either to play the game in a downpour or give up an off day later in the season. This led to a miserable experience for the teams, who had to play in horrendous weather, and for fans who had to sit through four and a half hours of rain just so the game would count on the schedule.

This has been a huge problem for baseball for years, which has refused to schedule intelligently in the early season. A lot of the bad weather occurs in April, so starting the season on the last two days of March doesn’t help. In addition, the Mets played a lot of games against teams outside the division already, like Toronto, while a division rival like Miami hasn’t even been to Citi Field yet. The league has gotten unlucky due to unseasonably bad weather this spring in the Northeast, but they asked for trouble with the way they set up their schedule. Yesterday’s game made a complete mockery of the sport, featuring constant delays so the grounds crew could put out drying agent to absorb all the liquid pummeling the playing surface. Toronto starter J.A. Happ slipped on his follow through on a pitch in the third, prompting a 17 minute delay to make the field playable.

Part of the blame here also falls on the umpires, who clearly were operating with a mandate of play the game at all costs. Choosing to play through the field conditions where Happ slipped was bad, but continuing the game once Toronto had it in the bag was pure insanity. The Blue Jays opened up a 6-0 lead after five innings and expanded it 9-0 after six. With the weather the way it was, there was no reason to prolong the fans’ misery for the sake of completing the game. The umpires also opened up the players to injury, and the Mets did suffer an injury when Juan Lagares jammed his big toe running into the wall for a catch in the ninth. Lagares’ injury may not be directly as a result of playing on a wet field, but he shouldn’t have been out there to begin with if the umpires did their jobs.