Your Morning Dump... Where with the long break before gm 3, let's review the Kyrie trade because it's fun 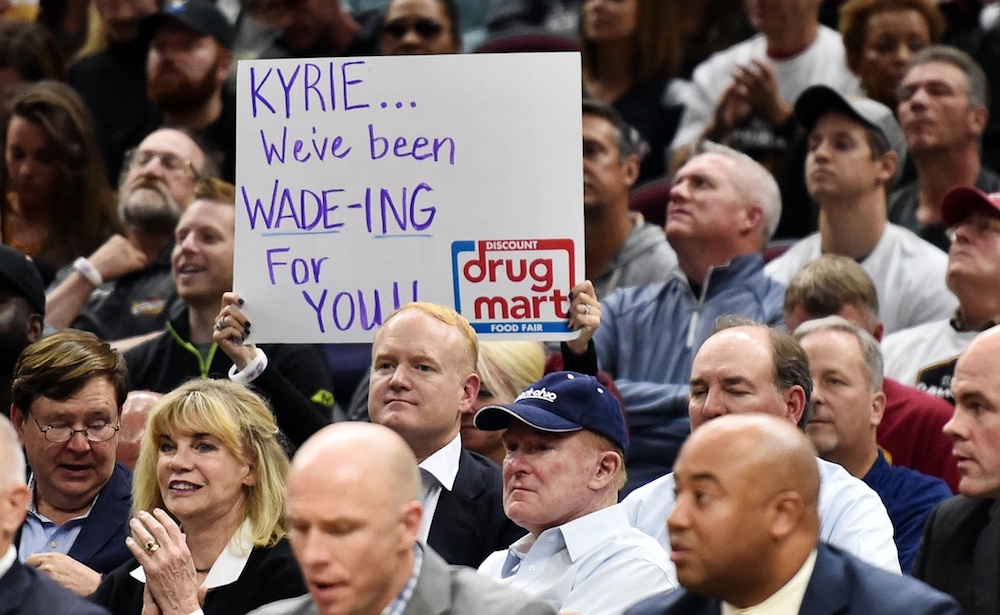 Your Morning Dump... Where with the long break before gm 3, let's review the Kyrie trade because it's fun

It’s quite telling that neither team has gotten any real contributions from the original members of last summer’s blockbuster trade in the Eastern Conference finals, yet one side can laugh its head off at the other.

The team laughing is the Celtics. The team wondering what they’ll do with the eighth overall pick they got for Kyrie freaking Irving is the Cavaliers.

Somehow, brand new Cavs GM Koby Altman and the front office orchestrated a deal to replace Irving with an All-NBA point guard, a top-of-the-line 3-and-D guy, a young big man with potential and — perhaps most impressively — an unprotected first-round pick that well could wind up in the top five of the 2018 draft, if not No. 1.

In the short term, Cleveland is just as equipped to deal with Golden State, if not more so thanks to the two-way ability of Crowder. The new additions could also help coerce LeBron James into staying in Cleveland rather than looking for greener pastures next summer. If LeBron’s still not convinced, they could flip Brooklyn’s pick for another established star.

But the Cavs also set themselves up for the future. Say next season is an absolute disaster and James decides to take his talents to Los Angeles (for instance) — the Cavs can let Thomas walk (this is the final year of his contract and he’ll likely command a max salary from somewhere), trade whatever remaining pieces they have and rely on Brooklyn’s pick to help get them their next franchise cornerstone.

So, the verdict on the Kyrie Irving trade isn’t officially in because the Cavs still have to make the eighth selection in the draft next month, but we don’t need to wait until then to laugh our heads off at the return.

The only thing that could make this all look worse for the Cavs is if Kyrie Irving were playing in this series and torching Cleveland’s abysmal backcourt defense play after play.

At the same time, doing all of this without Kyrie might just be the ultimate indication that the Cavs got utterly fleeced — Cleveland has all of its players connected to the trade (albeit, they’re all on the roster after Koby Altman traded the first set of guys that came from Boston) and they’re doing jack squat. The Celtics seem to have won the trade by simply removing Kyrie from Cleveland, thus demonstrating that Lebron and crew can’t win without him. Pretty wild.

But, now that the return is official with the draft lottery reveal two nights ago, it’s fun to look back at some of the analysis from the days after the deal was consummated.

To be fair, I was a bit conflicted about the trade when it happened, but I wasn’t downright definitive like our “expert” friend from CBSSports — he gave the Cavs an “A” for their efforts and the Celtics a “B.” Those same grades were doled out by Sports Illustrated in the days following the deal.

Would love to see how those two analysts grade out the trade today. Anything less than an A for the Celtics and an F for the Cavs would be absurd.

On page 2, the Celtics job on Lebron may be what’s most impressive

The Celtics have turned LeBron James into a turnover machine: One of the few flaws the 33-year-old has within his offensive game, beyond his streaky shooting, is his turnover tendencies. James is prone to make more mistakes when he handles the ball more, but the number of miscues he has committed in this series (13 over first two games) has helped weigh down the Cavs offense. That’s more than half of the 25 turnovers that Cleveland has committed as a team in the series. James has committed a turnover on 20 percent of his possessions against Boston, which is double his postseason rate heading into this series.

Some of the mistakes have been self-inflicted as James has dribbled into trouble and left himself vulnerable to pickpockets from the likes of Marcus Smart. Still, the Celtics have used LeBron’s playmaking tendencies against him by anticipating some home run passes by James before they arrive.

The Celtics knew they were getting Lebron’s best punch in game two, and it was certainly a haymaker, but in taking a step back and looking at Lebron’s 42/12/10 line, don’t forget the 7 turnovers.

At this point, Lebron is the Cavs. I don’t mean to take away from his greatness, but it’s easier to put up these absurd triple-doubles when you’re the one with the ball in your hands for a majority of every offensive possession (just ask Russell Westbrook).

Because Lebron has felt the need to do it all against a defense like the Celtics, he’s turned the ball over a bunch. Obviously Lebron’s stats are juicier, but it kind of reminds me of the way Ben Simmons had some near triple-double stat lines in the last series, only for those stats to feel empty because of turnovers.

The Cs are quick, long and smart on defense and while Lebron will continue to get his (until we break his spirit at some point soon like we did in 2010), the Celtics will take those absurd stat lines if they come with a heaping helping of turnovers.

And finally, why the fu*k does Lebron shoot every technical free throw???

There’s only one scenario in which LeBron James hustling can go wrong: it’s when he’s dashing to the free throw line. Take the opening game of the Eastern Conference finals between Cleveland and Boston this past weekend. In the third quarter, Boston’s Al Horford committed a three-second violation. It took half that time for LeBron to realize a technical foul had been called, and there he was: power-walking to the free throw line before Mike Breen could get the call out.

“It’s just one of those unspoken things that LeBron steps to the line,” says ESPN’s Brian Windhorst, who has been covering James his entire career. “Now I’m not saying that over the course of time, there weren’t moments when it was brought up within the coaching staff. The Cavs, like many teams, employ an entire analytics staff.”

“It’s just like dad at the dinner table with LeBron,” Windhorst says. “He gets the biggest piece of meat. … There were times where LeBron would push the guy off the line. A guy would actually be on the foul line, and he would come behind him and gently shove him off. And the guy’s always going to yield. LeBron’s always going to eat first.”

I almost wanted to present Windhorst’s quotes without comments. IT’S JUST LIKE DAD AT THE DINNER TABLE?!?!?!

I really hope the Celtics win game three by one point and we can all look back to Lebron shoving automatic Kyle Korver off the free throw line to brick a technical free throw.