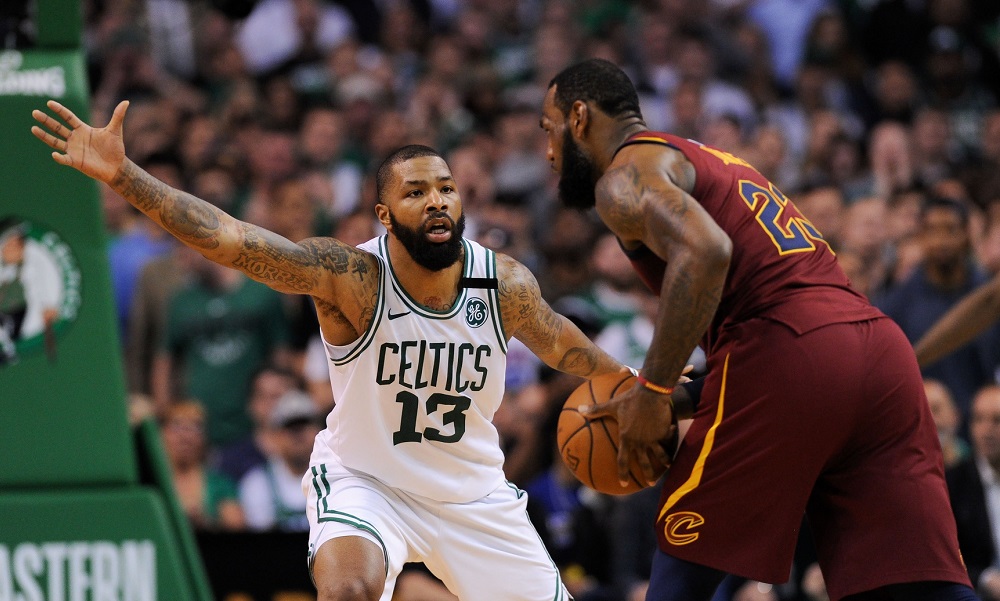 Nothing about this series, or this season for that matter, has been easy for the Celtics.

Which is why the raucous Quicken Loans Arena crowd – one of the better ones in the NBA – won’t rattle the Celtics.

They have been through too much, experienced far worse this season than anything the Cavaliers faithful can hurl their way.

Which is why this series is closer to being over than any of us envisioned.

Lue wants the Cavs to get out and running to get clean looks on the offensive end before the Celtics can get set.

To get the Cavs to play that style, Lue is singling out point guard George Hill. The 10-year veteran, acquired from the Sacramento Kings at the trade deadline, is averaging 4.0 points on 37.5 percent shooting and half an assist per game in the conference finals.

“We want to change it up with him being able to attack the bigs [that get switched onto him] and being aggressive, playing with more pace, miss or makes, getting the ball in fast, running to our drags, double drags and just playing with more speed and pace,” Lue said.

A Game 7 is the ultimate challenge for an NBA team. Everything is on the line, and every play is magnified by the pressure. This Celtics squad has already overcome that exact challenge in this postseason, beating Milwaukee in the first round.

And yet, tonight’s Game 3 in Cleveland is bigger than that Game 7. It’s the Most Important Game of This Season.

Sure, if Boston had lost that Game 7, the season would’ve ended. It would’ve hurt to lose to the Bucks, especially at home. But at that time, the team was still figuring out how to persevere without Kyrie. If the Cs had lost, we would have rationalized the defeat and begun looking forward to next season.

Tonight is much different. Obviously it’s not a win-or-go-home situation, but the stakes are still incredibly high. The Celtics have an opportunity to take complete command of the Eastern Conference Finals; to move within one win of the NBA Finals; and to break LeBron’s streak of seven years winning the East.

Conversely, a Cavs win will put them right back in the series, and probably restore their mojo.

So all the Celts have to do tonight is go into a hostile arena and face down a desperate team that’s led by the world’s best player. But based on what we’ve seen them do all season – the comebacks from double digits, the clutch shots in the final seconds, the poise under pressure, even while shorthanded – there is every reason to be confident.

On Page 2: We’re not talking about trades, not now

Phoenix Suns general manager Ryan McDonough says he is open to relinquishing his prized place in the NBA draft’s catbird seat — for the right return.

McDonough, in an interview on ESPN2’s NBA Draft Combine special on Friday, said the Suns haven’t ruled out the option of dealing away the No. 1 pick in June’s draft for a lower pick or even a worthy veteran.

“We’re certainly open to that. We’ll consider it,” McDonough said. “Obviously, we’ll have more information closer to the draft than we do today, after we go through the workout process and the interview process and we get the medical physicals. So we’re open to that.

“I think if you look around the NBA, as far as the veteran players, there are probably a few players we’d consider trading the pick for, not … just pick for player No. 1. So it’ll be a busy month for us.”

ESPN: Suns GM says options for No. 1 pick include trade for NBA star

With Anthony Davis leading the New Orleans Pelicans to the Western Conference semifinals, it seems less and less likely that the Pelicans trade him this summer. But according to ESPN’s Brian Windhorst on Zach Lowe’s “The Lowe Post” podcast, there is a chance another one of the league’s top big men is moved.

Windhorst indicated that Minnesota Timberwolves center Karl-Anthony Towns could be the newest subject of trade rumors, alluding to tension within the organization.

“I don’t think Anthony Davis is going anywhere any time soon,” Windhorst said. “Karl Towns, that might be a different story.”

“I said on some podcast recently that I just have a gut feeling that something crazy is going to happen there this summer,” Lowe said. “It’s not in a good place right now internally.”

No, no, no, we’re not talking about trades today, not with the Game of the Year just a few hours away. But other people are already going there, especially since many NBA observers can’t help but bring up Danny Ainge’s name in every … single … situation.

Maybe nothing will come of these rumors. Or maybe Phoenix will trade the No. 1 for Towns. Or maybe (closes eyes, takes a deep breath) Ainge will want to get involved. But that’s a discussion for another day.

By the time the ball is tipped tonight, it will be almost 100 hours since the Celtics and Cavaliers last were on the court together. And that’s unfortunate, because after Game 2 the Celts had all the momentum and the Cavs were reeling.

The reason for the delay was that television definitely controls the playoff schedule, and they wanted to stretch the conference finals to potentially two weeks long. The good news is, starting tonight there will be a game every night – alternating between the East and West – until the current series are wrapped up.

Mathematically, the Celtics could close out the Cavs as soon as Monday, May 21. If a Game 5 is needed, that will be on May 23. And if somehow Boston does eliminate the Cavs in four or five, get ready to wait again, even longer. Because, no matter what, the Finals aren’t starting until May 31.

Although that would be the best kind of problem to have.

Boston.com: Tommy Heinsohn explains what makes Jayson Tatum so special  |  Celtics assistant coach describes working with Jayson Tatum  |  How Brad Stevens stacks up against the other NBA Coach of the Year candidates