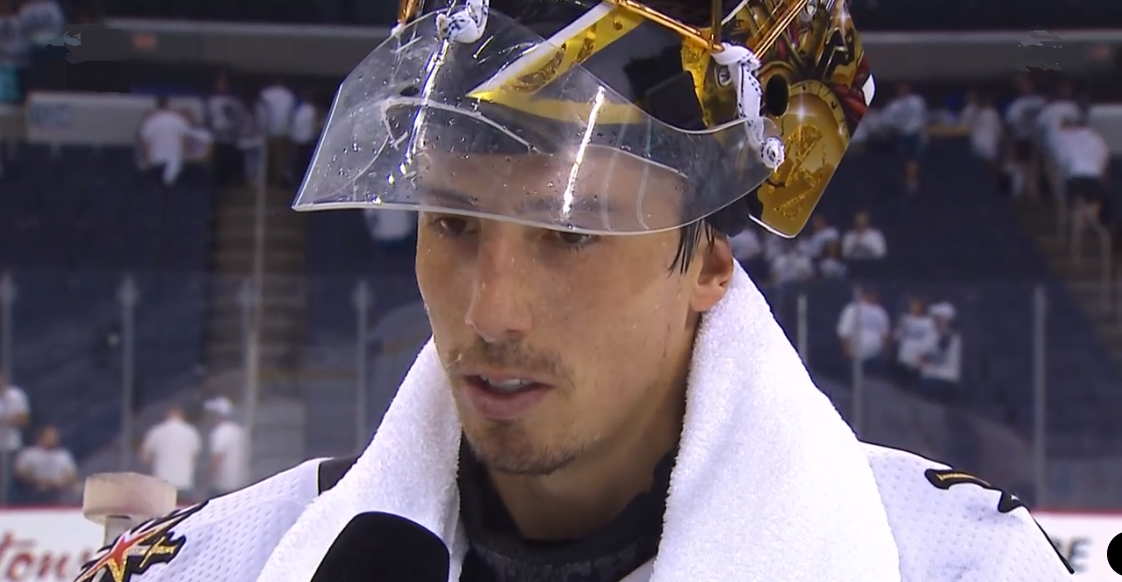 Be careful what you wish for.

Congratulations to ex-Pens David Perron, Ryan Reaves, Marc-Andre Fleury and Deryk Engelland who correctly touched the Clarence Campbell Bowl this afternoon following Vegas’ historic clinch of the Western Conference in their first year of existence. (No, we are not congratulating Uniform #18 for obvious reasons. Suck it.)

Fiction is dead. There is a less than one-year old team in Vegas and they’re going to be playing for the Stanley Cup in a week. Really, there is no historic precedent. NHL dot com is regaling us with stats about clubs from 50 and 100 years ago who qualified for the Final in their first year but let’s be serious. In the first NHL expansion in 1967-68, all the new clubs were in one division so by format alone, one of the six upstarts was guaranteed to make the Final.

This is so very different.

For proper-thinking Pittsburghers who understood why Fleury was not going to be on the 2017-18 Penguins roster even if the Vegas Golden Knights didn’t exist, you had closure as soon as last season’s Stanley Cup parade wrapped up.

In any language, keeping Matt Murray was the right hockey and financial decision.

But there was always that nagging pocket of Penguins fans who used to hate and say terrible things about Fleury who did this inexplicable 180 last summer. They gnashed their teeth loudly throughout the past eleven months, moaned and lamented that the team “let Fleury go instead of Matt Murray”.

Then Vegas got off to a surprisingly good start. Gnash gnash gnash.

Honestly, the worst part of this are the Pens fans who hated Fleury last year and are now going to be rooting for him in this final because all of the sudden, they hate Murray.

Vegas will regress back to the expansion norm, you told yourself, and we won’t have to hear people illogically pining for Fleury ever again.

Didn’t happen. At one point in January, Vegas was the top team in the NHL.

When it became apparent they would achieve the unthinkable: making the playoffs in their first year, you told yourself a hard-hitting team like L.A. or a playoff-experienced team like San Jose would knock them out.

He scored the decisive goal to send #VGK to the #StanleyCup final.

Today in Winnipeg, the Golden Knights clinched a berth in the Stanley Cup Final behind another lockdown performance from Fleury. Vegas has eliminated all three of their playoff opponents thus far on the road.

Admit it. As soon as Ryan Reaves, yes the Ryan Reaves, also the subject of much consternation in these parts, tipped in the go-ahead/winning goal mid-way through Game 5, you knew in your heart this is just one of those years where all the planets align.

There’s nothing left to do except take the body blow. There will be another two weeks of irrational “Release Murray!!! we should have kept Fleury AND REAVES!!!!” tweets splattered all over local social media, but so be it. There’s no way the Cup isn’t rolling down the Vegas Strip in mid-June. No entity is powerful enough to stop Vegas right now, not Washington; not Tampa Bay. When Fleury skates out to center ice in three weeks to claim the Conn Smythe Trophy, more power to him.

He handled everything like a pro’s pro over the past year. But it still was the right decision to keep Murray and Matt will still have better numbers over the next five years.

In case you’re wondering: By my quick unofficial hand count, Fleury will be the first goalie in 33 years to be on a Stanley Cup Final roster for three straight seasons (Andy Moog 1983-85). Battlin’ Billy Smith was the last to actually play in three or more consecutive Finals (1980-85). When Tampa Bay dips the final teabag in Washington’s mouth later this week, Chris Kunitz will be the first player to skate in three straight Finals since the now-retired, one-time Penguin Marian Hossa. He lost in 2008 with Pittsburgh, 2009 with Detroit and won in 2010 with Chicago.