Your Morning Dump... Where the Celtics needed to get their butts whipped 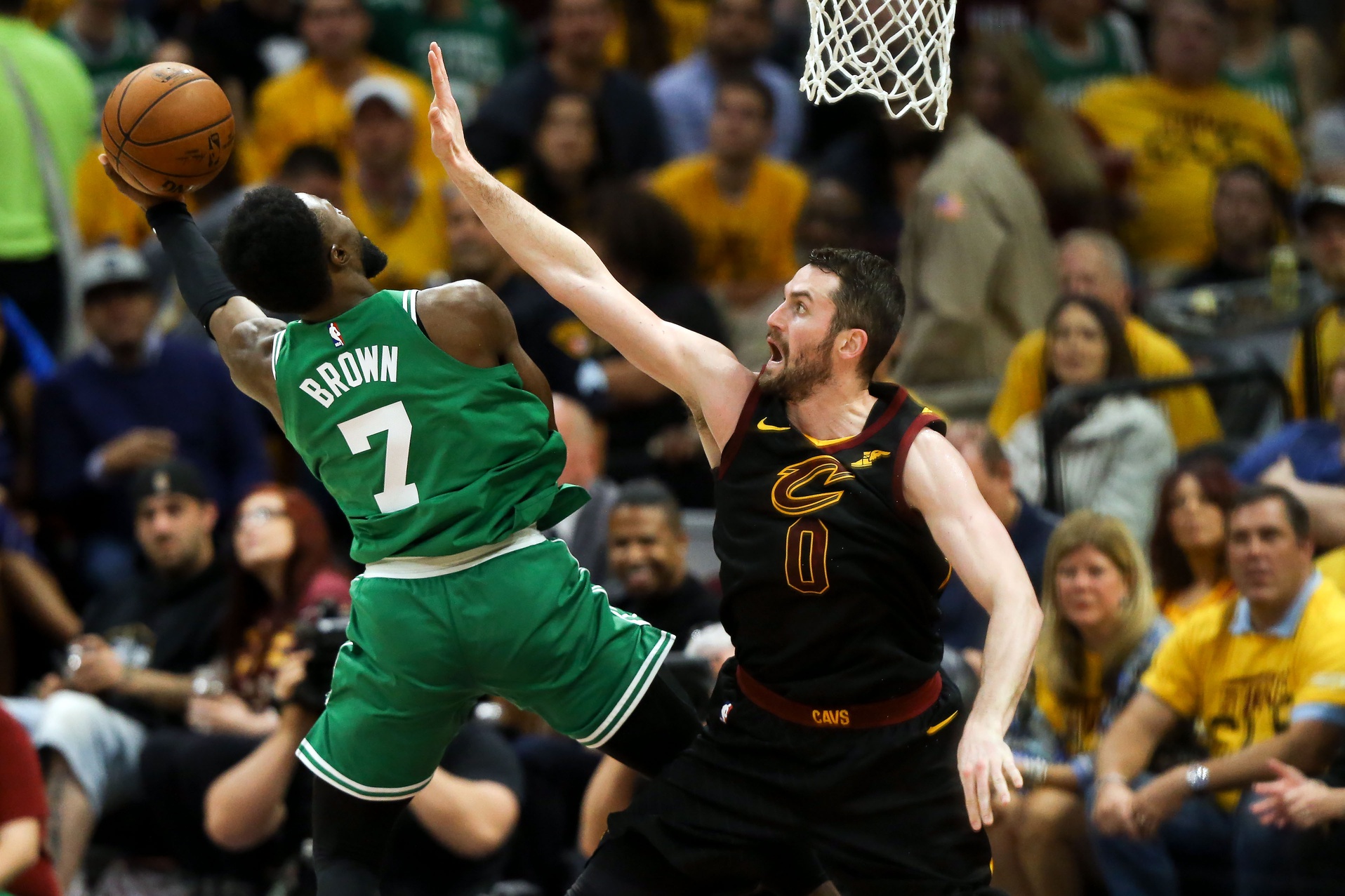 Your Morning Dump... Where the Celtics needed to get their butts whipped

A series in which Cleveland had opened as the favorites had suddenly shifted to one that could send them home for the summer quite quickly.

For those reasons, the 116-86 drubbing the Cavaliers handed to the Celtics in Saturday’s Game 3 came somewhat out of the blue. But Boston point guard Terry Rozier, for one, said it was a welcome reset.

“We needed to get our butts whipped, come back to reality, and take care of business [in Game 4] on Monday,” he said.

The Celtics broke down in so many other ways throughout a 116-86 Game 3 loss, but Horford’s lack of opportunities served as one barometer for their nonexistent flow. When the Celtics are right, possessions funnel through him. But the team looked broken from the start Saturday, reinforcing it will need to be locked in for any chance to knock LeBron James and the Cavaliers out of the playoffs.

“It’s a reminder that every game you have to bring it,” Marcus Smart said. “Especially in the playoffs. No one is just going to give you anything special on the court. Everybody plays well on their home court so we have to go and take it.”

The Athletic: King: Everything went wrong for Celtics in Game 3 loss to Cavs

Last night’s result was as predictable as Marcus Morris pulling up for a contested mid-range jumper.

The Celtics were complicit in the blowout. The Cavs didn’t impose sheer LeBron-fueled will on Boston early. The Celtics were getting rolled because they just couldn’t score. They were, quite frankly, playing the ugly, disjointed kind of basketball that a team missing it’s two biggest stars would play in a road Conference Finals game.

This brings us to Rozier’s comment, because it’s both completely expected and somewhat infuriating.

The Celtics are young. Their youth leaves them prone to fits of bravado, so it’s not shocking in the least that they’d walk into Cleveland filled with dreams of guarding James Harden or Kevin Durant rather than any of the Cavs in front of them. After all, we, the collective observers of the Celtics, had largely declared the Cavaliers dead and half-buried with only the hand of LeBron to possibly pull them from the grave.

Players can say they don’t read the stories but we know better. Everywhere the Celtics turned the Cavs were being written off. So, predictably, they began Game 3 with a total lack of focus. They took the floor and played as if the Cavs would wilt and die at the sight of the Celtics jerseys.

There was nothing dominant about that Cavs first quarter. The Celtics had every chance to keep up. There was no wild barrage, no napalming of the Celtics defense by LeBron… just a slow drip of Cavaliers baskets and Celtics misses. The game was 9-4 Cavs for nearly three full minutes. The Celtics missed three shots and turned the ball over twice in that stretch (including one inexplicable one from Jaylen Brown trying to dance on the baseline like he wasn’t aware of the court dimensions).

You get the point. The Celtics had their chances but they were in no position to capitalize.

The Celtics have a season full of lessons supposedly learned that they are just not capable of playing a game like that. It’s frustrating to watch so many bad decisions being made after all the talk during their time off. They’re simply not good enough to come out with individual goals in mind or mentally checked out from the series. They have not gotten away with it at all this season.

Now they have to prepare for a Cavs team that is regaining confidence. If JR Smith an George Hill carry their shooting over into Game 4, the Celtics will be in a bit of trouble.

The dead-and-buried Cavaliers still have a pulse. I hope Rozier is right and this refocuses Boston on the task at hand or else these guys will be just another footnote on LeBron’s resume.

Globe: The Celtics looked like they left their fight back in Boston, and other thoughts

MassLive: Boston Celtics’ first-quarter offensive struggles lead to blowout: ‘We just didn’t play like ourselves’  |  Terry Rozier: Boston Celtics ‘needed to get our butts whipped, come back to reality’

BSJ: Bedard: Cavs decimate a Celtics team that had obviously bought its own hype  |  Robb: Plenty of blame to pass around for Celtics in Game 3 disaster  |  Video: Terry Rozier – ‘We need to get our butts whipped, come back to reality and take care of business Monday’

Since Al Horford and Terry Rozier control the offense most of the game, Celtics coach Brad Stevens tends to open games running sets for Brown and Jayson Tatum, or even Aron Baynes. He wants his off-ball players to touch the rock early, get their rhythm going and not grow stale as the team gets into more of its pick-and-roll game. Most games, the Celtics will run a dribble handoff [DHO] series out of the high post to get their wings the ball on the move, or find an advantageous post-up for Baynes. Cavs coach Ty Lue wanted to make sure Brown felt the Cavs’ physicality early.

“We changed a couple things up,” Lue told reporters. “We know Jaylen is a first-quarter player. He plays good throughout the game, but he really sets the tone early in that first quarter. So we wanted to do a good job on him. I thought LeBron really did a good job of closing out to him, making him put it on the floor, cutting him off and making him play in the crowd. It was good for us to slow him down that first quarter because he’s been really good in Boston. That was good for us.”

What stood out about Brown’s first quarter stat line was how he was scoreless on one missed shot from the field in the first.

Brown acknowledged after the game how the Cavaliers defended him very differently than they had in the previous two games.

“I just don’t think they let me catch the ball,” Brown said. “They were denying me. They didn’t want me to get the ball and when I did get it, it wasn’t in the position I was comfortable in.”

NBCS Boston: Brown looks to make adjustments after Cavs limit him in Game 3

Jaylen looked out of sorts for this whole game. Maybe this defensive scheme threw him for a loop. Maybe he just wasn’t focused.

Either way, it’s interesting how much things have changed in a year. Brown was having trouble getting playing time and now the Cavs are designing defenses to stop him.

The reason why Brown gets going early is the focus is often elsewhere for opponents. Brown’s offense often comes off transition or off ball rotation where he either gets a mismatch, a cross-match, or he catches defenders in rotation and out of control.

There’s a saying… “The ball finds energy.” The ball will find the guy who is putting in the work and moving. If the Celtics aren’t moving and leaving Jaylen Brown to create his own shot, he won’t do nearly as well as when he’s moving and the ball finds him in good positions to score.

It’s obviously imperative to run things through Horford. The Cavs did a good job taking him away last night, so the Celtics need to adjust and get Horford back to being the focal point.

In Game 3, Horford all but disappeared, scoring seven points on 2-for-4 shooting while Thompson put up 10 points on the other end.

“He’s defended him well,” Cavs coach Tyronn Lue said. “I think he’s physical. Al Horford is a perennial All-Star, and they run a lot of sets through him. He’s usually handling the ball at the top of the key, making the dribble handoffs or pick-and-pop, shooting the 3 and posting him. Tristan is the kind of guy who is agile enough to get back on his shot when he pops to put ball pressure on him at the top of the key. Just try to make him uncomfortable. Al is a good player, so he’s going to be able to score, but we just want to make it tough. I think Tristan is the best matchup for him for us to do that.”

Related links:  BSJ: Video: Jaylen Brown – ‘I just don’t think they were letting me catch the ball, they were denying me’

Thank you everyone for the kind thoughts, yes I was taken to the hospital last night & as my wife likes to remind me I don’t drink enough. On my way home & as most my friends know I don’t have a heart to give me trouble @NBA @celtics @TMZ @TMZLive @NBAonTNT @MSNBC @YahooSports

Looks like Bill Russell just suffered from a bit of dehydration. I hope he’s ok now because, selfishly, I’m not ready for a world without this man in it.

He is, simply, the best.

The Athletic: How George Hill got his groove back

NBCSN: LeBron gets Cavs back into series with blowout win over Celtics  |  Celtics dominated by Cavaliers in Game 3, 116-86