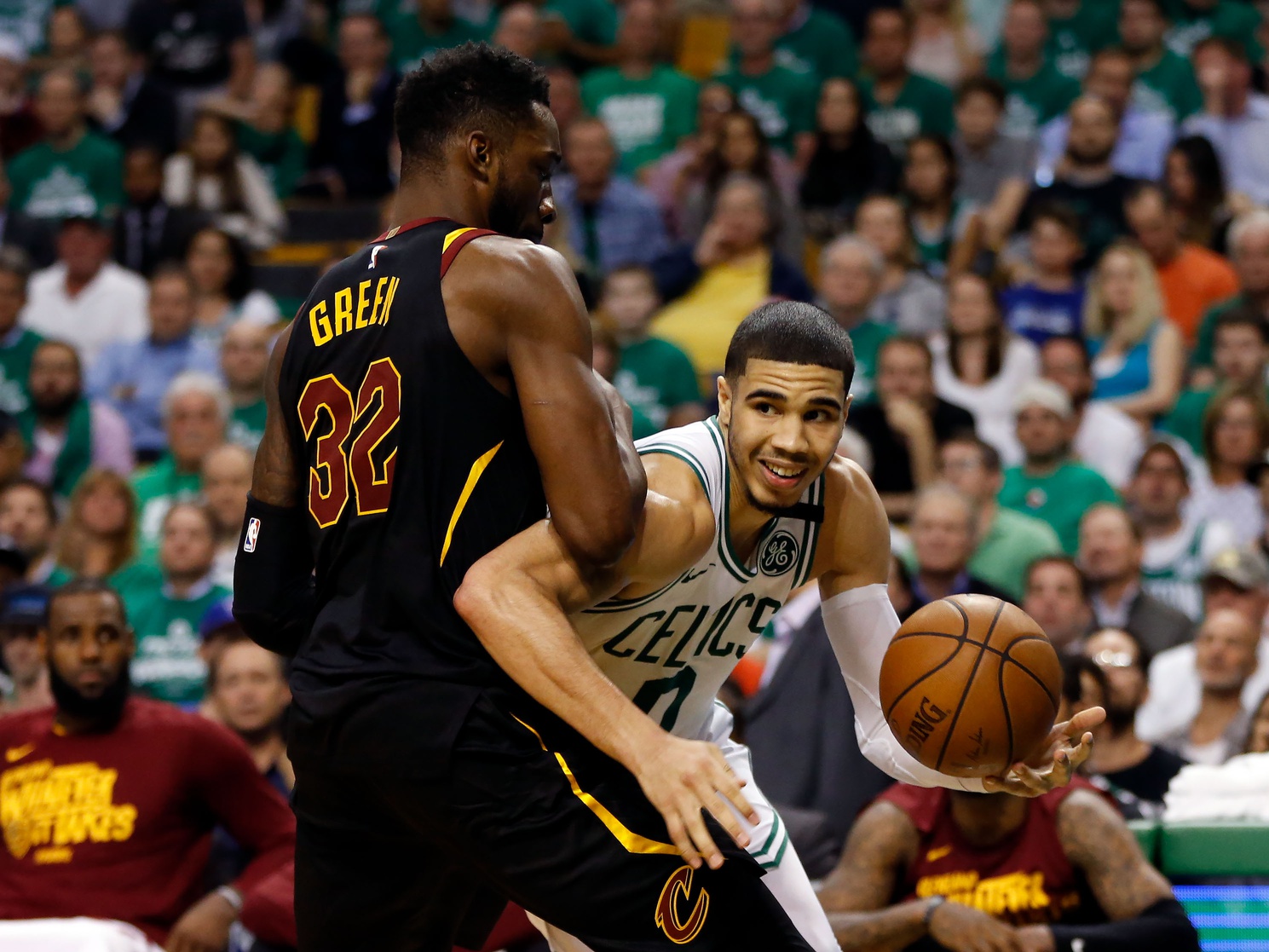 Boston remains undefeated at home during these playoffs (10-0) thanks to their otherworldly defensive effort and hot start from deep. Jayson Tatum led the team with 24 points and chipped in 7 rebounds, 4 assists, and some stellar defense of his own for good measure (4 steals!).

The Celtics are now one win away from the NBA Finals and will travel to Cleveland for Game 6 on Friday night.

The Celtics were ready with their adjustments in Game 5, the most obvious being that Aron Baynes was chosen to replace Marcus Morris in the starting lineup. This decision paid dividends almost immediately as Aron made his presence felt on the defensive end with a block. Baynes then followed Jaylen Brown in transition and eventually made the offensive rebound and tip-in off of a missed layup.

Baynes getting it done on both ends! pic.twitter.com/Xmu9x7J3lr

The Cavs were equipped with adjustments of their own, though. After shooting a paltry 3 of 12 from the field in the last game, Kevin Love was fed early and often in an attempt to get him back into rhythm. It worked like a charm. Love had 10 points on 50% shooting from the field and was the games leading scorer by the end of the quarter.

As for the Celtics leading scorer, that’d be this young kid you may have heard of, Jayson Tatum. Perhaps even more impressive than leading his team with 9 points was his defense, though. Jayson Tatum had 2 steals to go along with 2 assists and 2 rebounds; but the highlight may have been the beautiful denial of a LeBron James entry pass. The Cavs almost had as many turnovers (5) as they had field goals (7) and the Celtics had a healthy lead heading into the second thanks in large part to hitting half of their attempts from deep (6 of 12). Boston led, 32-19, after the first quarter.

The second quarter brought the smoke. When Larry Nance Jr. went up for 2, Marcus Morris was there to reject him and made sure he heard about it afterward. Nance Jr. apparently took exception with Morris standing over him after the block, and he shoved Morris as he walked away. Terry is “really with the shits” so he went over and shoved Nance Jr. about as hard as he could. The whole foolishness is captured in the tweet below:

And a Morris wink pic.twitter.com/gAv6i3rD0Z

The play ultimately resulted in off-setting double technicals for Morris and Nance Jr., but because Terry Rozier stupidly went over and got involved, Korver got to shoot a free throw and the Cavs received the possession. Cleveland ultimately went on a 11-3 run following the scuffle, much of it thanks to Clarkson getting hot from deep.

The Cavs eventually cut the game to just an 8 point lead for the Celtics, at which point Boston put on the extra burners and added a cushion with a 7-0 run of their own. The team that shot second best from deep (behind only the Golden State Warriors, obviously) actually shot like it tonight – they were 9 of 22 from deep at half – but it’s typically not a good sign when a team’s 3PT% (40.9%) is better than their 2PT% (34.8%). Regardless, the Celtics brought a 53-42 lead into the locker room at half.

The Cavs continued to lean on Love and LeBron – who combined to score 26 points on 11 of 19 shooting, while the rest of the team had just 16 points on 4 of 18 shooting thus far – but the workload seemed to take it’s toll on LeBron by the third quarter. He uncharacteristically turned the ball over on multiple occasions and looked sloppy on D; he even airmailed a lefty hook. LeBron didn’t look like himself so much that the announcers had to let us know about it maybe 4 different times through out the third.

Speaking of ugly play- can we talk about Terry Rozier for a second? The man is C.O.L.D. I’m not sure if it’s from running around with all of those switches on defense or just the task of guarding LeBron James, but Scary Terry’s shooting from the field was horrific tonight. He missed multiple WIDE OPEN shots from all over the floor. It was actually hard to watch.

On the bright side, Jayson Tatum looked phenomenal. At one point during the third he even outpaced LeBron for a loose ball then beat him to the rim to finish the slam in transition. Tatum led the Celtics with 21 points at the end of three. The Celtics entered the fourth quarter ahead, 76-60.

The rook is having himself a game! pic.twitter.com/z29UKqftwU

Boston was in control and weren’t willing to let it go. Marcus Smart and Marcus Morris each made their impact felt with a couple of threes to stretch their lead at the beginning of the final frame. They’d each finish the game with 13 points.

The Cavs went on a 9-0 run to cut the Celtics lead to 12 in the fourth quarter, but that was as close as it’d get. Cleveland came up empty on their next four possessions and were unable to climb back into the game thanks to staunch defense by the Celtics.

LeBron James continued throwing turnovers into the hands of the Celtics defense and he finished with 6TO in the game- a credit to Boston’s refocused and consistent effort on D through out the night. Boston’s unofficial nail in the dagger came when Jay-Tay hit his third three of the night to bring his point total to 24. They continued to hit their free throws down the stretch and finished with super impressive efficiency (they went 21 of 23 from the charity stripe as a team, good enough for 91.3%). The Green team went on to win the game decidedly, 96-83.

Fun fact: The team that wins the rebound battle is undefeated in this series. Boston out-rebounded Cleveland 45-39 tonight.

Jayson Tatum flashed some of his court vision tonight and finished with 4 assists.

The Marcus connection is as strong as ever.

Just when the Celtics were starting to look like they may be in trouble, Rozier found Horford for the oop in transition to send the C’s back up 14 with under 6 minutes remaining.

Rozier finds Horford for the oop in transition! 💥 pic.twitter.com/mOTN9G6t1X