Your Morning Dump... Where "He's a Rookie" and his scoring has Cs one game away 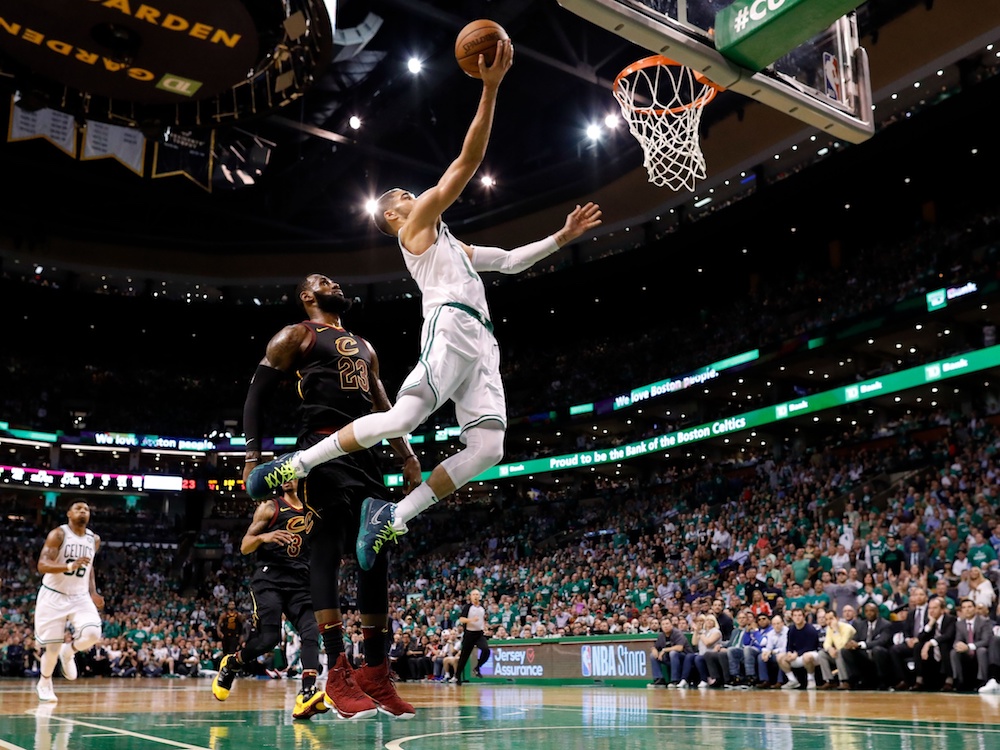 Your Morning Dump... Where "He's a Rookie" and his scoring has Cs one game away

Sometimes you forget what you are looking at in Jayson Tatum, a sinewy 6-foot-8, 205-pound forward with a scorer’s touch. You forget that he’s 20, a year removed from playing in the NCAA tournament, two years from high school, when he was a math-taking student with a pair of Air Jordans — or whatever the kids are wearing these days — and a dream.

You forget, because Tatum makes it easy to. Consider: Game 5, Boston’s season on the line — nobody thought the Celtics could have gone back to Cleveland down 3-2 and then win, did they? — and who does Boston turn to? Tatum, who scored 24 points, pulled down seven rebounds and handed out four assists in a critical 96-83 Eastern Conference finals win — but can’t yet buy beer.

“Even though he was scoring, he didn’t try to rush [and] he didn’t press,” Cavs coach Tyronn Lue said. “He just played within the game and took his shots when they were there. He played like a veteran tonight.”

Yahoo Sports — Rookie Jayson Tatum helps Celtics regain control of the series, but can he keep it up?

I was at the game last night, and am still feeling that next morning buzz one feels after sitting (eh, mostly standing) at the Garden with 18,000 screaming their heads off. It was, of course, deafeningly loud at times, with cheers of “Let’s Go Celtics” and every mother’s favorite, “Eff you, JR.” At one point, with the Cs 20-year-old offensive alpha dog, Jayson Tatum, at the line, two young girls behind me started trying to revive a chant from the last round of the playoffs “He’s a rookie!”

Given the fact that that particular chant seems only relevant within the context of a series also including Ben Simmons, the chant didn’t spread past the two fans behind me, but maybe it is worth us all chanting that again and again until the league year turns to 2018-19 and Tatum is an NBA sophomore.

Everyone essentially keeps writing about it —  as good friend of the Cs, Chris Mannix, did above.

Whose offense has the Cs sitting one game away from dethroning the King and getting to the NBA Finals.

Which means, yes, he’s going to be doing things like this for a long time. This is just chapter one in what will hopefully be a tome that needs its own shelf in an NBA library.

And he belongs on this stage already. Let’s see if he can do it again on Friday night in Cleveland. Keep chanting it, because it still is unbelievable.

On page 2, Lebron James was of course just conserving his energy

Watching what LeBron James has been doing night after night in these playoffs, sometimes we take for granted that he’s actually a human being — at least we think he is. Tyronn Lue admitted that James looked tired on Wednesday, and he was seen throughout the game grabbing his shorts and hunching over to catch his breath. You have to wonder if LeBron dropped down into a lower gear after Boston took an early double-digit lead. His numbers were still great for a normal person (26 points, 10 rebounds, five assists), but fell well short of his lofty standard.

LeBron’s been around long enough to think in terms of a series, not just a single game, and he knows that he still has a home game to tie things up before a potential Game 7. James tends to read his teammates, and perhaps he figured they just didn’t have it in Game 5, and chose to save his energy for the monumental effort that Cleveland will inevitably require from him in the next two games.

In the first half, or so, of Lebron’s career, people refused to give him credit for some of the herculean things he was doing. “He’s not Michael Jordan, and he’ll never be.” “He shouldn’t have made that pass to a wide open teammate at the end of the game, he doesn’t want it.”

Now? People will make any excuse for James when his team doesn’t win, or when he submits a stat line that is under his standard (yes, 26/10/5 is well under his standards in an Eastern Conference Finals game at this point).

This excuse is my favorite I’ve seen: Lebron packed it in early because he saw his team didn’t have it. Seriously? So, he missed a series of lay-ups and turned the ball over down the stretch when his team was still in shouting distance because he knew his teammates didn’t have it? Might as well just look to game six, right? The Celtics couldn’t score and the lead was between 10-12 points, a couple of Lebron threes or trips to the line and all of a sudden the Cavs are primed for a comeback. And not only using this excuse, but couching it in “Lebron’s so smart, he knows when to look ahead to the  next game.”

That is so, so bogus. Give credit to the Celtics for throwing multiple looks at James; for disrupting passing lanes and for, yes, tiring the legend out. I don’t mind the “Lebron looks tired” angle because he definitely did look tired. But please spare me the notion that he was flexing some competitive advantage and that the ever-working mind of Lebron was doing the mental calculus to determine that he should ease up and prepare for the next game.

If the Cs can win their first road game of this series on Friday night, get ready for the deluge of pieces about the Cavs supporting cast and how Lebron eased up so he has the mental stamina to make his free agency decision.

And finally, Ty Lue almost didn’t let Kyle Korver go to the dance last night b/c his matchup dumped him

Ty Lue says the absence of Semi Ojeleye tonight messed up the playing time for his matchup, Kyle Korver. pic.twitter.com/vLvIf7xFjf