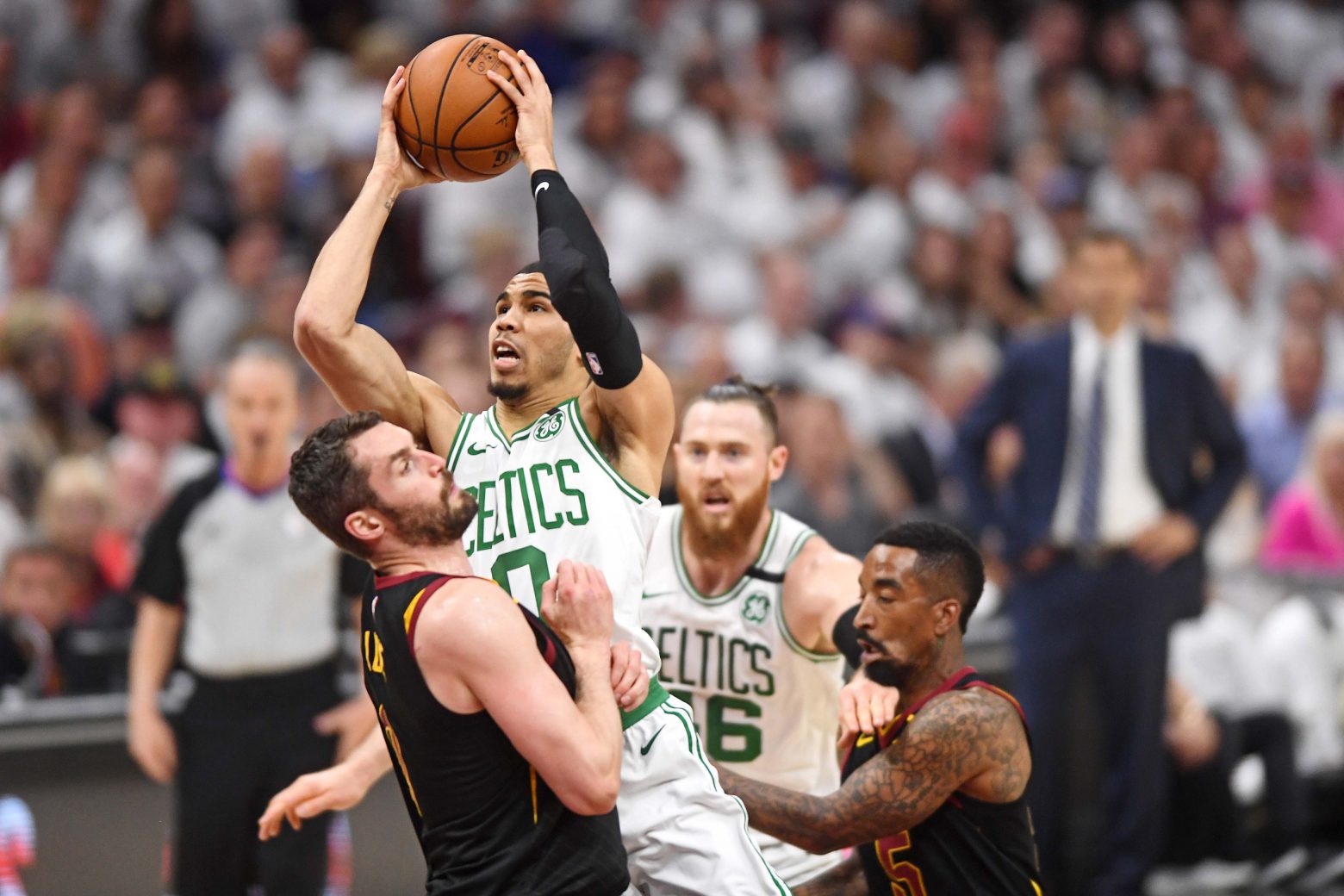 Folks, I don’t know how to tell you this, but, like, LeBron James is really f***ing good at NBA basketball. And the Boston Celtics, immensely strong as a unit as they are even with the limitations forced upon them by injury, couldn’t overcome his performance due to help he received from George Hill, Jeff Green and the rest of the Cleveland Cavaliers bench. Nothing was decided until the final two minutes, but James managed to force a Game 7 final showdown in these Eastern Conference Finals by willing his highly flawed squad to a 109-99 win.

The Celtics looked better to start this game than they had for any game on the road thus far. By which I mean they looked fairly competent. (“Fairly competent” being a huge improvement speaks to the massive road/home disparities to which both of these teams have been subject.) Jaylen Brown’s solid start, in defiance of the Kobe Bryant DETAIL curse, may have been more promising than anything else.

About seven minutes into the game, Jayson Tatum errantly bonked his head into Kevin Love’s, and knocked the Cavaliers F/C to the ground in a possible concussion. I hope Love is OK, but if that gets spun as some “dirty player” narrative I’m gonna lose it. (Hey, I’ve seen accusations of that for even more innocuous actions.)

This, along with the inspired play of George Hill, galvanized Cleveland somewhat and shortened the early Boston lead to just a point. But Jaylen wasn’t having it, ultimately scoring 15 of the points the Cs racked up in the first quarter to establish a 25-20 lead after 12 minutes.

LeBron was LeBron, doing it all as usual. Unsurprisingly, he managed to erode the Celtics lead by either facilitating or scoring points, in what became a 16-3 Cavs run but only had them up by seven. Not exactly gut-check time, but still undeniably distressing to Cs fans—perhaps more than anything else because Cleveland defense was responsible for a lot of it. Stop me if you’ve heard this one before, but the Cavs defense was one of the league’s worst in the regular season and hasn’t been much better in the playoffs. (Except at f***ing home during the f***ing Eastern Conference Finals WHEN I NEED IT TO BE BAD, apparently, or previously against the shook-to-death Toronto Raptors.)

Some of the trouble spots for the Celtics were quite familiar: Mook Morris and other roleplayers messing up on the road, Cavs roleplayers whipping ass at home. But LeBron began to look tired again, as he had in Game 5 and hadn’t previously for the whole of these playoffs. Also, Terry Rozier’s shooting, usually shaky as hell on the road, was on point and kept the Celtics from falling much further behind. So the Celtics were down, but far from out, with the Cavs leading 54-43 at the half. (Al Horford going scoreless was alarming, though, as were Tatum’s struggles.)

As it happened, Love would be placed in the NBA’s concussion protocol, which isn’t the way you ever want to win a game if you’re a human being. At the same time, you kinda need to take advantage of the breaks you get. The Celtics didn’t do so to start the second half, and the Cavaliers padded their lead. If not for some classic Cleveland blunders—idiotic J.R. Smith fouls, a blatant moving screen by Tristan Thompson—things could have been a lot worse. Yet the home team’s defense remained fairly solid, and Boston wasn’t able to do much to chip away in the first half of the third.

Tatum eased into his offense in Q3’s waning minutes, scoring 9 points, a great sign after his first-half struggles. But Terry Rozier is who truly kept the Celtics alive, having one of his best offensive games of the playoffs and forcing the deficit down to 10 at the frame’s end: 83-73 Cavaliers.

Brown, who’d had something of a rough game for the second and third quarters, got his mojo back somewhat in the final 12 minutes and scored some truly tough baskets. LeBron and Hill kept the Cavaliers ahead, albeit not by much. Horford’s shooting remained meh to say the least, but he nailed free throws when fouled on drives and low-post efforts, and further helped Boston remain in the game.

For a dude who I don’t think wants to remain where he is team-wise, LeBron seems dedicated to keeping the Cavs season alive. Maybe it’s pride. But you can’t argue with the sheer magnitude of James’s performances, and this may well have been one of his best ever, 15 years into his career. And the Celtics blew opportunities to get ahead, for which they only have themselves and their inexplicable vulnerability to a hideously uneven Cavs defense to blame.

This is a fan-centric blog, but I will not knock the hustle of LeBron James even if the end result he engendered drove me nuts as an unrepentant green-teamer. See you in Game 7, big fella.

NOT ISH: As effective as the Cavaliers defense was, it wasn’t particularly well-executed, which made its positive results even more frustrating and the Celtics’ struggles even more damning. Also, dudes like Lou Merloni are 100 percent going to point to clips from this (objectively bad) Horford game to say they were right all along with their Average Al hogwash.

(Seguing off that—New  rule, the typing of which is fueled by a few drops of the craythur from County Cork: Boston sports guys who like one or two sports more than others need to stick to those sports and not act like they have to have a f***ing opinion about sports they don’t clearly don’t actually watch or care about. Felger loves the Pats, Sox and Bruins in I think that order and clearly doesn’t watch the Celtics regularly, and thus shouldn’t talk about them. Merloni loves the Sox more than life itself, and should focus on that kazillion-dollar boondoggle. Minihane and Callahan should probably be barred from speaking in public about anything, but that’s another matter.)

.@T_Rozzay3 with his fifth three of the night to cut it to 10 to end the quarter ☘️ pic.twitter.com/N2NHUJDY9D