Your Morning Dump… Where The King is not dead yet 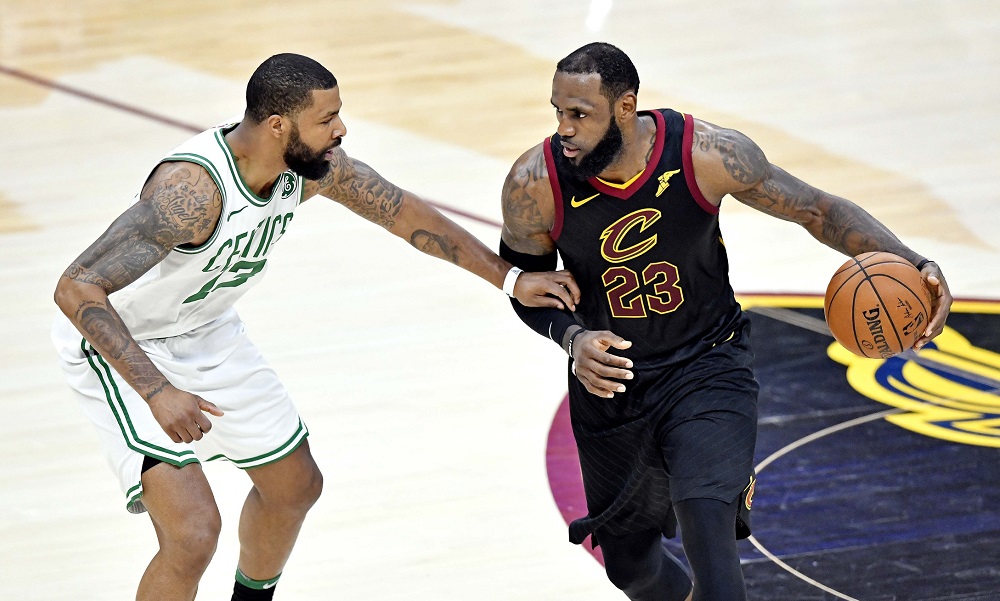 Your Morning Dump… Where The King is not dead yet

The 109-99 Game 6 victory makes it six wins in the Cavs’ past seven elimination games and sets LeBron James up for a chance to go to his eighth consecutive Finals in Game 7 on Sunday in Boston. James, who has the highest scoring average in elimination games in NBA history, has won his past five Game 7s, including the first round this season against the Indiana Pacers.

James added to his already-historic postseason with 46 points, 11 rebounds and nine assists Friday for his seventh 40-point game of the playoffs. It was the most he’s ever scored in an elimination game and just three points off his playoff career high of 49. He played the game’s first 35 minutes before resting, and expended enormous energy to keep the Cavs alive.

He was especially aggressive in the first half, when he piled up 25 points to help Cleveland build a double-digit lead. Then he finished the exquisite performance with back-to-back 3-pointers in a 40-second span late in the fourth quarter to provide his team the cushion it needed to finish the job.

I really wanted to be able to write the Cavs’ epitaph this morning. Even had the headline picked out: “The King is dead, Long live the King!” But closing out LeBron James on his home floor is something this particular Celtics team is not ready to do.

Before tipoff, it was clear the Celtics would have a mountain to climb to complete this improbable run to the Finals:

Those are some amazing numbers, but with 46/11/9, LeBron outdid even himself last night. He simply wasn’t going to lose, and all you can do is tip your cap.

Having said that, it’s also true that the Celtics could’ve won this game. They’ve overachieved so much this season that, before tipoff, there was reason for optimism. But, over the 48 minutes, they just made too many mistakes.

Unlike Games 3 and 4 in Cleveland, the Cs avoided a bad start and held a 5-point lead after the first quarter. Then they gave it all away by losing the second quarter, 34-18, which included a stretch of five minutes without making a field goal. They always stayed close enough to have a chance, but also never got closer than 7 points the rest of the way.

George Hill, who was averaging only 8.2 points through the first five games, shot 7-of-12 and put up 20 points. Jeff Green, who hadn’t come close to double-figures, scored 14. And Larry Nance, Jr., previously invisible in the series, added 10 points on 5-of-5 shooting. Those combined performances killed the Cs as much as LeBron did.

On the Celtics’ side, Al Horford was a non-factor. He was double-teamed whenever he got the ball and finished with just 6 points. Aron Baynes was scoreless and Mook Morris was cold, hitting just 3 of 10 shots. Greg Monroe played 5 minutes and was a disaster.

The hosts grabbed 15 offensive rebounds on just 87 shot attempts, which opened the door for 18 second-chance points over the course of Game 6. The majority of the damage came in the fourth quarter when the Cavs grabbed seven offensive rebounds on their 11 missed field goal attempts. The Cavs piled on eight second-chance points on those extra opportunities, essentially preventing the Celtics from stringing together more than one stop at a time.

Even worse, Boston just couldn’t get the stops they needed to get back into the game. Two sequences early in the fourth quarter stood out.

Both of those plays gave the Cavs a 10-point margin after the Celtics had cut it to 8. Those are the moments that give momentum to one team or the other, and ultimately decide the game. And that was true last night.

It hurt not to close out the series, but regardless, the Celtics have been amazing this postseason. It’s incredible that they’ve come this far, especially with the high degree of difficulty they faced with their opponents having the best player – Giannis, Embiid, LeBron – in each series. After Kyrie went down, if someone had guaranteed that the Celtics would make it at least to a home Game 7 in the ECF, every fan would have taken that in a heartbeat.

Now that we’re here, however, it would be very disappointing to see it slip away. Yes, it’s scary to consider facing LeBron in a winner-take-all showdown, but even if he duplicates his Game 6 performance in Game 7, will Hill/Green/Nance combine for 44 points again? It’s not likely.

It’s indeed baffling and frustrating that the Celtics haven’t been able to win on the road. But tomorrow night, they won’t have to. They just need one more home win to finish the most improbable run to the Finals in Celtics history. And as we know, anything is possible.

"We need the whole city of Boston," Terry Rozier says for Game 7.

MassLive: LeBron James lifts Cleveland Cavaliers over Boston Celtics 109-99 in Game 6, evens Eastern Conference Finals 3-3  |  Boston Celtics prepare for Game 7, LeBron James: ‘We got to be ready to come up with our nose bloodied’

Globe: LeBron James was up for the challenge

ESPN Boston: Marcus Smart: Celtics must prepare for ‘dogfight’ in Game 7 vs. Cavaliers

Love and Tatum inadvertently collided midway through the quarter and both dropped to the floor. Love, who missed a March 28 game at Charlotte with a concussion, immediately raised his left arm as if to signal he needed help.

He stayed down for several minutes before he was pulled to his feet. Love walked unsteadily to the bench with guard George Hill holding one of his arms. Love sat briefly before heading to the locker room for further evaluation.

When a starting forward plays only five minutes and doesn’t score, you’d figure that would hurt a team. Yet, as described above, the Cavs didn’t miss Love one bit, thanks to Green and Nance.

Love’s status is not known yet, but if he is concussed and misses Game 7, that could be a problem for the Cavs. They haven’t played well in Boston even with Love, who was averaging 15 points and 11 boards through five games of this series.

One good thing, at least: the collision that injured Love was completely accidental, so Cleveland fans have no reason to give Tatum the Kelly Olynyk treatment.

By far the biggest Celtics loss of the night is Terry Rozier's twitter getting hacked and erased.

It’s true. @T_Rozzay3 has been taken over by “Zaid Alamareen” and all of Rozier’s tweets have disappeared. Tito is one of the godfathers of Weird Celtics Twitter, so the drama’s about to get real.