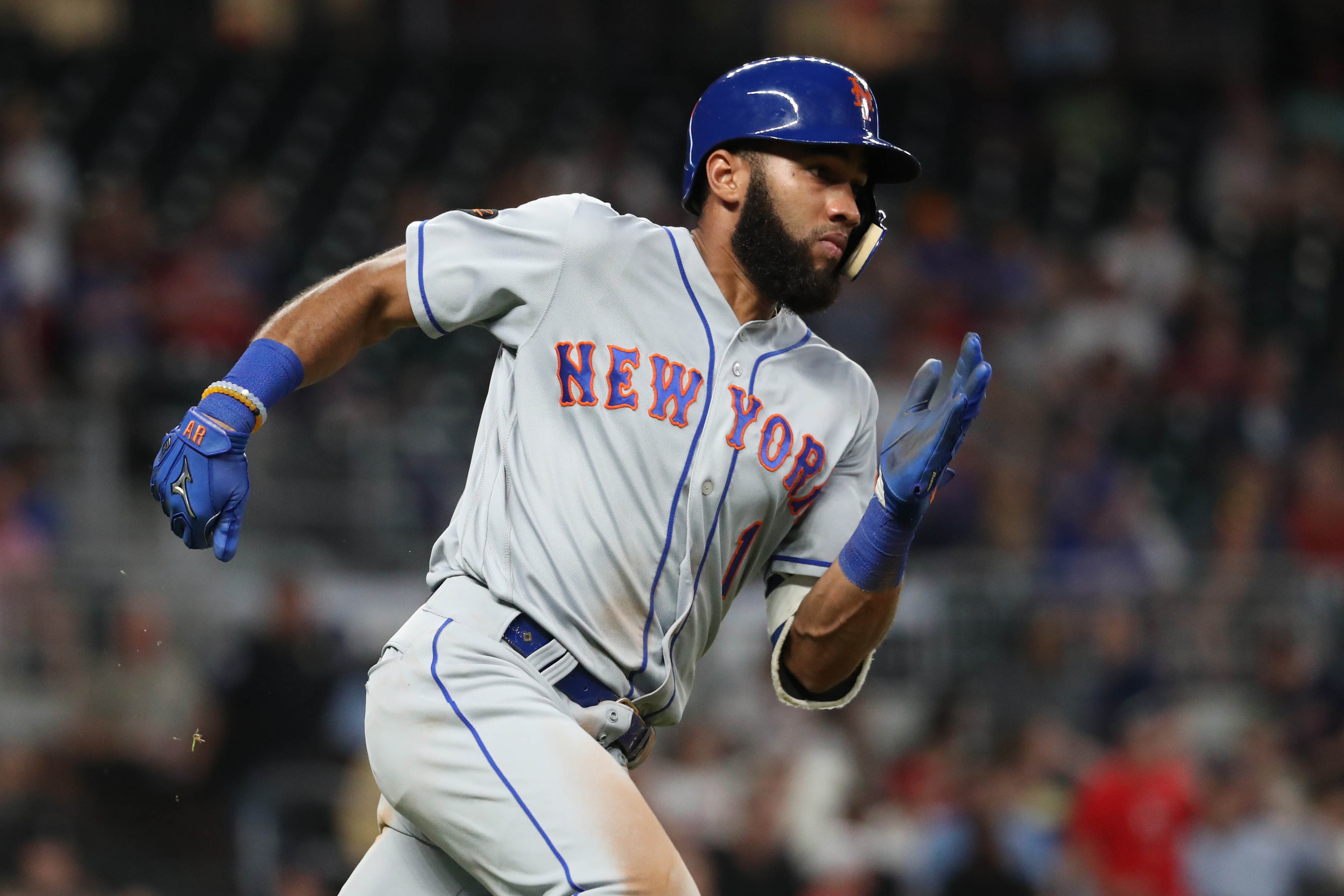 The New York Mets (26-25) have weathered a challenging road trip and managed to keep their heads above water despite a growing list of injuries, an impressive accomplishment to say the least. The team went only 3-5 on the road trip, but it ended on a positive note last night when Jason Vargas tossed five shutout innings to help the Mets salvage a series split against the first place Atlanta Braves. The Mets return home tonight to kick off a nine game home stand against the Chicago Cubs (29-23), who are starting to round into form. First pitch for the opener of the four game weekend series is scheduled for 7:10 pm at Citi Field.

May 30, 2018; Atlanta, GA, USA; New York Mets shortstop Amed Rosario (1) runs to first base after he hit a double in the ninth inning against the Atlanta Braves at SunTrust Park. Mandatory Credit: Jason Getz-USA TODAY Sports

The Cubs won the National League Central last season with a 92-70 record, holding off the Milwaukee Brewers by six games, before falling to the Los Angeles Dodgers in the National League Championship Series. The Brewers have gotten the jump on the Cubs this season, entering play today with a 4.5 game lead in the division, but the Cubs have been hot of late. Chicago has gone 13-8 since May 7th to pass the St. Louis Cardinals and Pittsburgh Pirates in the division, and a lot of credit has to go to the offense. Kris Bryant (.281/8/27) has been productive as usual, but the Cubs have also gotten surprising contributions from Albert Almora Jr (.315/2/13), Javier Baez (.271/13/43), and Addison Russell (.265/2/14). The pitching has been a bit more suspect for the Cubs, who have seen big ticket free agent Yu Darvish (1-3, 4.95 ERA) flop while Jose Quintana (4-5, 4.78 ERA) has had a rough second year on the North Side of Chicago. The big surprise has been closer Brandon Morrow, who has already racked up 12 saves and has an ERA of 1.00 after coming over from the Los Angeles Dodgers in free agency.

The Mets will send right hander Seth Lugo (1-1, 2.48 ERA) to the mound for his first start of the season. Lugo last pitched on Monday, when he gave up three runs in 1.1 innings of relief to lose to the Atlanta Braves, including a walk off homer from light hitting Charlie Culberson. The Mets are using Lugo to help fill the void created in the rotation when Noah Syndergaard landed on the disabled list with a strained ligament in his right index finger. The Cubs will counter with the aforementioned Quintana. Quintana was hit hard in his last start, giving up four runs in 4.1 innings pitched to lose to the San Francisco Giants last Saturday.