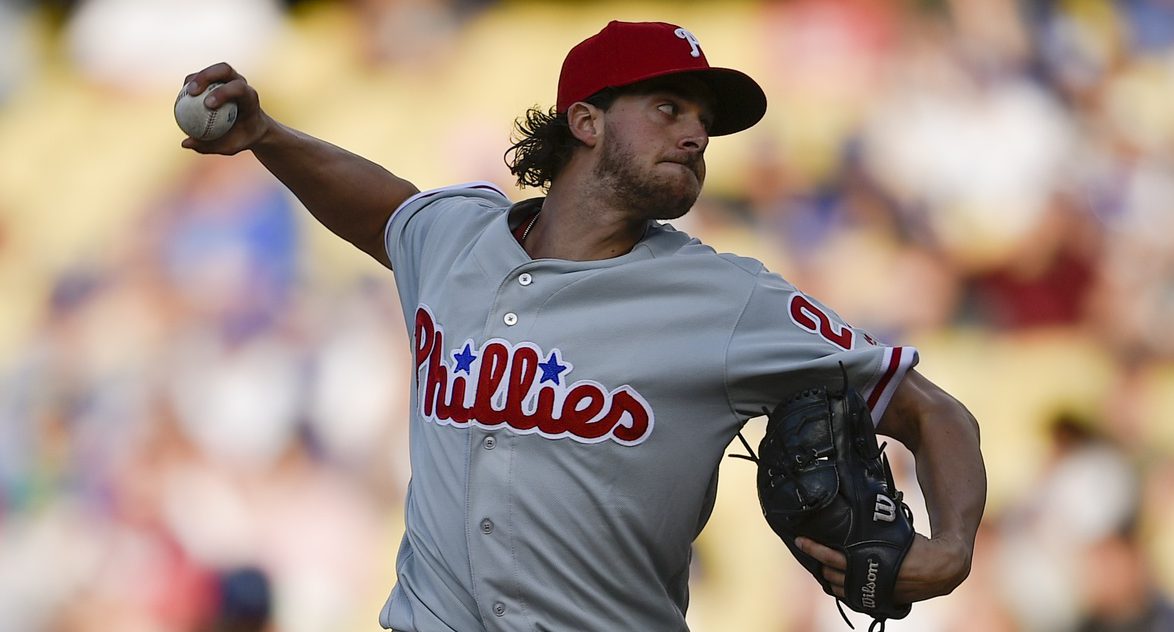 The month of May was a fantastic one for the top two pitchers in the Phillies rotation. Aaron Nola closed out the month with a gem against the Dodgers.

At the beginning of the month, I suggested it was beyond time to start considering Aaron Nola as an ace. The month of May did not disappoint for the young Phillies starter. After taking a no-hitter bid into the seventh inning of a game last Saturday, Nola lifted the Phillies to a four-game series split on the road against the Los Angeles Dodgers. Nola’s seven innings of two-hit, one-run baseball on the mound allowed Gabe Kapler to hand the game over to Seranthony Dominguez for a two-inning save as the Phillies wiggled their way past Clayton Kershaw and the Dodgers in a 2-1 victory.

Tonight was Aaron Nola's 6th start already this season of 6+ innings and no more than 1 run.

Only pitcher in the majors with more is Justin Verlander.

Kershaw was making his first start for the Dodgers since May 1 after being taken off the disabled list, but he was his typical dominant self in five innings on the mound. The Phillies scratched four hits and one run while striking out five times against the Cy Young winner. The one run scored against Kershaw, however, should not have counted.

On a Jorge Alfaro single to center field, Maikel Franco was waved home from second base. As he came into home standing up, Franco clearly stepped past home plate, never touched the base and made his way to the dugout after being called safe by the home plate umpire.

#Dodgers manager Dave Roberts says the reason they did not challenge the play at home plate in which Maikel Franco "scored" in the 2nd inning is that they didn't know that Franco didn't touch home plate.

Doc said that Grandal asked HP umpire Will Little if Franco touched home plate and he said yes. Doc didn’t know he didn’t and so they didn’t challenge it #Dodgers

Blame the umpire for missing this one so badly, but the Dodgers have to take the responsibility for not asking for the replay. As it turned out, that run turned out to be huge as the Phillies won by a 2-1 margin.

The month of May closes out with the Phillies standing tall at 31-23, which puts them in third place in the NL East, trailing first-place Atlanta by one game with two games in hand, and just a half game behind the Nationals in the division and for the top spot in the NL Wild Card. The Phillies also have a game in hand on the Nationals. The Braves and Nationals are one game into their four-game weekend series after Thursday night. Two months in, the NL East is highly competitive at the top right now between the Phillies, Braves, and Nationals. And considering the Phillies having a rough record in the division, it is hard not to imagine how much things would look differently if the Phillies just played .500 within the division.

The offense may be in need of some sparks, but the Phillies have two of the best pitchers in the division right now in Nola and Jake Arrieta, and that will be enough to keep the wins coming.

Jake Arrieta and Aaron Nola
🔥🔥 in May

As for Seranthony Dominguez, he has been quite a joy to watch come in out of the bullpen. I suspect he’ll hit a rough patch at some point just because he is young and eventually hitters will pick up on something, but wow.

Seranthony Dominguez, wow. He's faced 43 batters as a major-leaguer and 3 have reached base.

After this four-game split in Los Angeles, the Phillies head to northern California for a three-game weekend series with the San Francisco Giants. Nick Pivetta and Vince Velasquez will hope to keep the good vibes going on the mound before Arrieta takes the mound to close out the series before the Phillies make a stop in Chicago to play the Cubs on their way back to Citizens Bank Park with division-leaders Milwaukee and Colorado on deck. This continues to be a huge stretch for the Phillies, and so far they have been ready for the task of staying relevant this summer.