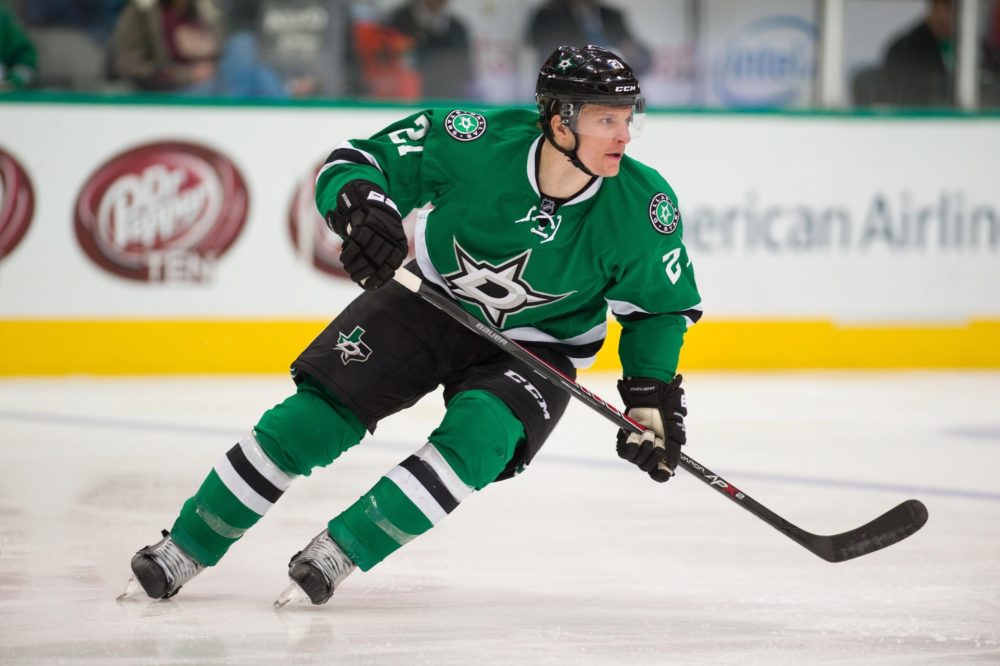 Agitating players usually become fan favorites in Edmonton pretty quickly. Remember how hated Zack Kassian once was by Oiler fans? Look at how loved his was by the playoffs last season, when his physical and agitating style made a difference.

The Oilers are looking to revamp their bottom-six, and will certainly be looking for more players cut from that cloth. They’ll need value contracts, players that can contribute a little offense, leaders, and guys that can play a bit of a physical style.

Antoine Roussel has been a royal pain in the ass for the Edmonton Oilers for years. He routinely has beat them up on the scoring sheet and on the ice throughout his career in Dallas. The 28-year old veteran is slated to be a free agent on July 1st, and will almost certainly garner interest from Edmonton.

Dallas was sitting pretty almost all season long, but the Stars collapsed late and missed the playoffs in heartbreaking fashion for the second straight season. That led to a coaching change for the club, and will almost certainly lead to some changes on the roster.

With Jim Montgomery taking over behind the bench, and the club looking for some younger players to emerge behind their core group, it’s possible the Stars let Roussel walk in free agency. While he’s a solid player for them, he’s one of only a few UFA’s, and the club needs to make room for prospects like Jason Dickinson and Denis Gurianov.

A bottom-six left winger who doesn’t have much in the way of size (5’11”, 195 pounds), Roussel sure is a pain for the opponents to deal with. He plays a hard style and one of his main goals is to get under your skin and get you off your game. He plays physical and walks the line, sometimes going over it.

He works extremely hard, and also is strong on puck battles, something not every Oiler can say right now. On top of that, Roussel is a strong penalty killer. As anyone who watched the club knows, Edmonton was putrid in this area last season.

Roussel posted a 52.4% Corsi For during the 2017-18 season with Dallas, while starting just 42.4% of his shifts in the offensive zone. He was given a steady diet of defensive zone draws and still came out with positive possession. That’s a very good sign for this player.

Here’s a look at Roussel’s scouting report via The Hockey News.

Assets: A hard worker who plays in-your-face hockey, he likes to crash the boards and dish out hits. Has lower-body strength to win puck battles. Can kill penalties with aplomb. Is also a world-class agitator.

Flaws: Does not have a lot of top-end skill, and is inconsistent on offense, so he is limited to a bottom-six forward role at the National Hockey League level. Can sometimes take bad penalties that cost his team.

Roussel handled a third line role in Dallas, but honestly I’m not sure he has the offensive chops to play a top-nine role in the NHL. Even if he returns to his top form, he’s still only posting 29 points. This is a player, after all, that has never hit 30 points in an NHL season.

In Edmonton, he’d likely play a bottom-six role for the club. If we assume that Ryan Nugent-Hopkins and Milan Lucic are the top two left wingers, then it’s possible that Roussel slides in on line three. I’d personally be more comfortable with him in a fourth line role.

Roussel would be eligible for a Seattle expansion draft if we followed the rumored timeline, which would see the process take place in June of 2020. That said, Roussel isn’t a player that is worthy of being protected, and he shouldn’t be a real factor here.

I could see a two-year pact getting it done for the forward from France this off-season, and suspect a cap hit around $1,750,000 could be enough based on his established level of production.

This is a player that will no doubt appeal to the Edmonton Oilers this off-season should he hit the market. Roussel plays a style coveted by the organization, and scratches the itches of penalty killing forward and leadership.

I’d be a little worried about overpaying for a player like this, considering the lack of offensive output, but I’d have time for him should the contract be right. I suspect Peter Chiarelli and the Edmonton front office feels the same way and will be snooping around him when the legal tampering period opens up.