What is it about the Pittsburgh Pirates and the Chicago Cubs? 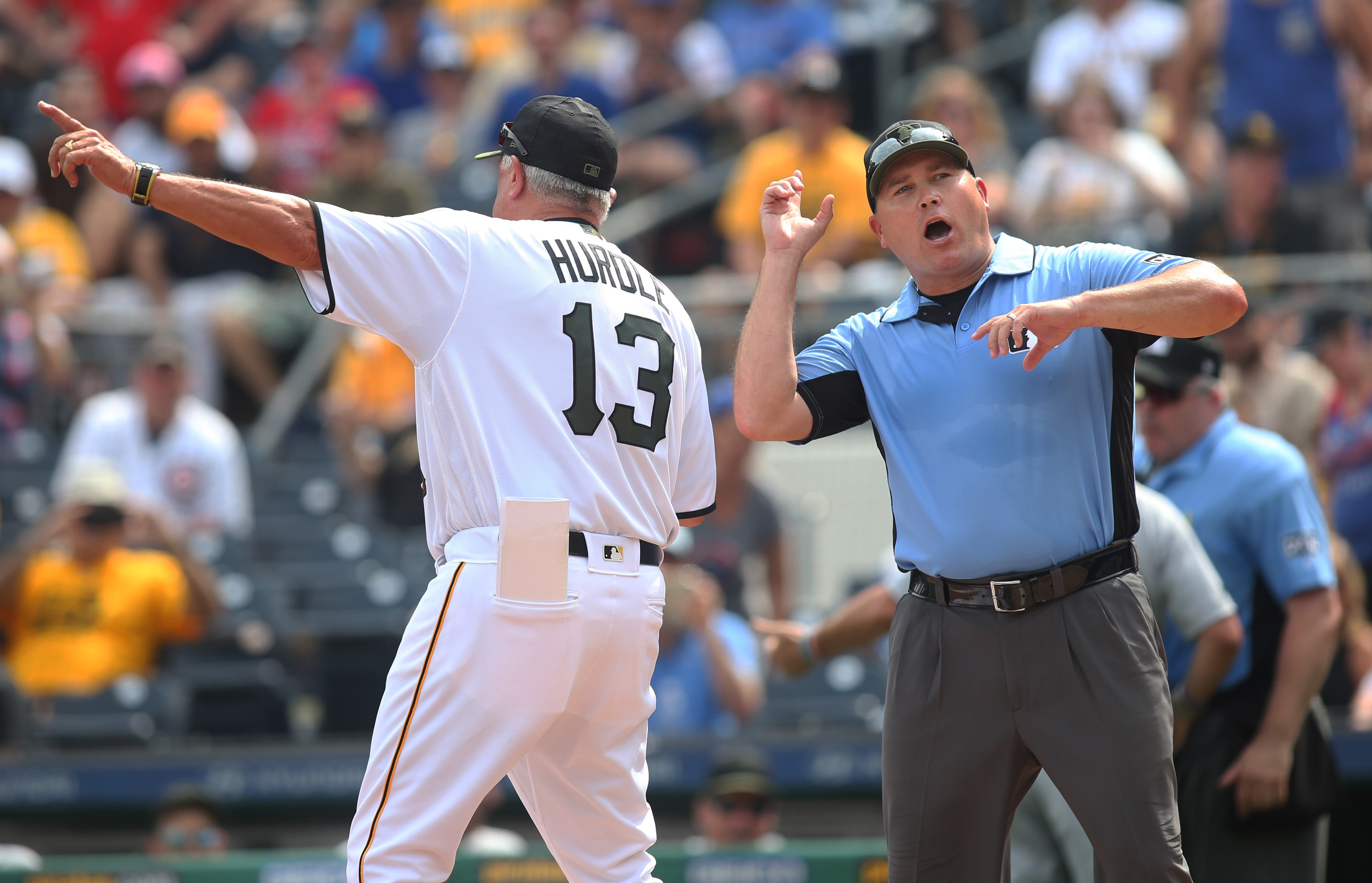 What is it about the Pittsburgh Pirates and the Chicago Cubs?

Baseball rivalries are as old as the game itself and help fuel the healthy nature of competition amongst teams and their respective fanbases. But, whatever is going on between the Pittsburgh Pirates and the Chicago Cubs surpasses all of that, hovering on the brink of something much darker.

Now that the series against the Chicago Cubs is over, and the Pittsburgh Pirates are likely just arriving for batting practice at Busch Stadium ahead of their series against St. Louis, it’s safe to assume there’s a bit of relief echoing through the halls of Major League Baseball. Relief that all they’re dealing with from the latest meeting between the Pirates and the Cubs is the shame of a blown call by their review crew, and the governing body’s impotent response to it, and not something worse.

That’s how it seems to be whenever these two teams meet these days – three to four days of collective breath-holding. Not just with hope that the team eeks out those crucial division wins, but with the prayer that nothing terrible happens. This is not just any other baseball rivalry folks, it’s far surpassed that now.

The Pirates and the Cubs have a lot of history. In fact, on May 29, the MLB Stat of the Day Twitter account tweeted this:

The @Pirates and @Cubs have matched up more than any other teams in @MLB history.

131 years of competition, that is, if you ignore the 62 more wins by the Pirates, in all other stats surprisingly balanced between the teams. And as anyone knows, that’s a lot of history. So, it’s no wonder that the Pirates and the Cubs, and their respective fans, get under each others’ skin. But in recent times, it’s gone to a much darker place.

Back in October 2015, then-Cubs pitcher Jake Arrieta (in)famously trolled Pirates fans on Twitter ahead of the National League Wildcard game. It blew up across the sports world and got a lot of national attention. At the time it just seemed petty, that a major league pitcher would chirp at fans, but it was also entertaining. Pirates fans certainly gave it back to him with both barrels and Cubs fans got in on the act by “allegedly” sneaking into the office building across the street from PNC Park and changing the “Let’s Go Bucs” sign in the window to “Let’s Go Cubs.” But looking back, I wonder if that was the start of a new culture of vitriol, a new “us against them at any cost” mentality ushered in by the Cubs.

There was good reason for Pirates fans to chirp back at Arietta and the Cubs in general in 2015, all Wildcard competition aside. Just a few weeks prior, then Cubs-utility player Chris Coghlan executed a spikes-up take out slide against the Pirates’ Jung Ho Kang, breaking his leg and tearing his MCL. Remorse was, shall we say, not very evident on the field or in the Cubs dugout. In fact, it was rumored amongst South Korean sports media that the only reason Coghlan issued an apology at all was due to death threats he received from Kang’s sizeable South Korean fanbase.

Following the game, Cubs Manager Joe Maddon callously responded to questions about Kang’s injury that he thought it might be plantar fasciitis.

His response to a similar take-out slide on Monday, this time at home against catcher Elias Diaz by Cubs first baseman Anthony Rizzo (which MLB ruled illegal a day late and a dollar short), was equally tone-deaf. Maddon said he knew “Riz” would be treated unfairly for it by the Pittsburgh Pirates fanbase.

There is something unsettling about a professional sports manager, any human being, really, who lacks the basic ability to express concern for a person’s suffering (well, you know, anyone who isn’t on his roster who might get “booed”).

And lest you believe this anger is saved solely for the teams on the field, think again. I am a prolific tweeter and I can tell you without hesitation, that without fail, when the Chicago Cubs play the Pittsburgh Pirates, I’m gonna be using the block feature – hard.

The threats, the “shut up you stupid baseball bunny and go make me a sandwich” barbs, the “otherwise did you enjoy your first baseball game?” misogyny, the messages I receive with either just my home address or even Google Earth images of my home, almost exclusively come from Cubs fans. Like, written in their bio “Cubs fan” Cubs fans.

I’ve visited about 15 of the 30 MLB Ballparks, and I’ve rooted against the home team while there on several occasions. I’ve worn a Blue Jays jersey into Yankee Stadium, so again, not a vacuum here. But I have only ever been cursed at, in front of my children no-less, for simply cheering on the Pirates, or any other opposing team for that matter, by Cubs fans at Wrigley Field. One fan, in particular, sitting right in front of me, got increasingly outraged about the presence of these four, non-obnoxious Pirates fans trying to enjoy an Easter Sunday game at one of the country’s most historic ballparks.

Yes, I acknowledge that these are the actions of a few fans and trust me, I’ve seen enough Yinzers behaving badly in my day to not label an entire fanbase for the behavior of a few. However, I also feel that it’s important to point out that there was an usher sitting right behind my family at Wrigley (when we sat down he gave my kids Cubs stickers and also gave my husband directions to an ice cream vendor) – who absolutely heard every word of abuse hurled at us and our measured requests that the guy stop and did nothing.

Family friends and fellow Pirates fans were visiting Wrigley that same weekend and received even more verbal assaults than we did.

If the Cubs aren’t creating a culture of anger and bitterness inside and outside of the ballpark, they’re certainly condoning the one that’s organically formed around this team.

The Empire Strikes Back

Because the relationship between the Pirates and Cubs has been so strained of late, there was much chatter as to whether or not the Pirates would retaliate against the Cubs for the slide. Would Nick Kingham, in his third major league start, plunk Rizzo? And that answer was no. Aside from the likely suspension, MLB, by ruling earlier the day that the replay crew in New York got the initial call wrong and the slide was illegal, further neutered the Pirates from taking action. Would that be the end of it?

Last night, Pirates starter Joe Musgrove executed an aggressive slide into second to break up a play. And Maddon responded in textbook fashion, a laughable amount of self-righteous indignation for someone lauding a much more dangerous play by Rizzo as “good baseball” a few days before. Would that finally end it? A sort of baseball tit for tat that immediately exalted Joe Musgrove to legendary status amongst Pirates fans?

Because Javier Baez had to chirp at Musgrove as he headed back to the dugout. The veteran righty, who sports a World Series ring from his time with the Astros, wasn’t having any of it. And, the speed with which the benches cleared when the two men exchanged words indicates that there likely isn’t an end in sight.

Baseball rivalries are good for the game – but when it reaches this level – it’s not good for anyone, especially the men on the field who put their bodies on the line every day they step on the field.

The Pittsburgh Pirates face the Cubs next June 8-10 at Wrigley Field.